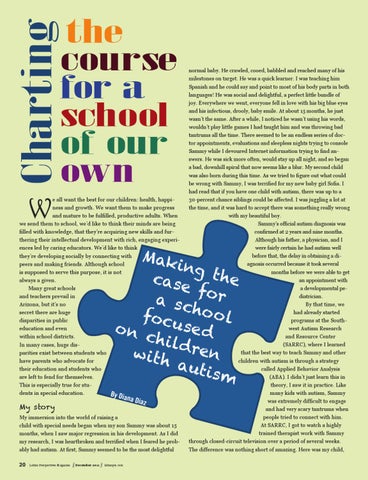 the course for a school of our own

e all want the best for our children: health, happiness and growth. We want them to make progress and mature to be fulfilled, productive adults. When we send them to school, we’d like to think their minds are being filled with knowledge, that they’re acquiring new skills and furthering their intellectual development with rich, engaging experiences led by caring educators. We’d like to think they’re developing socially by connecting with peers and making friends. Although school is supposed to serve this purpose, it is not always a given. Many great schools and teachers prevail in Arizona, but it’s no secret there are huge disparities in public education and even within school districts. In many cases, huge disparities exist between students who have parents who advocate for their education and students who are left to fend for themselves. This is especially true for students in special education. By

normal baby. He crawled, cooed, babbled and reached many of his milestones on target. He was a quick learner. I was teaching him Spanish and he could say and point to most of his body parts in both languages! He was social and delightful, a perfect little bundle of joy. Everywhere we went, everyone fell in love with his big blue eyes and his infectious, drooly, baby smile. At about 15 months, he just wasn’t the same. After a while, I noticed he wasn’t using his words, wouldn’t play little games I had taught him and was throwing bad tantrums all the time. There seemed to be an endless series of doctor appointments, evaluations and sleepless nights trying to console Sammy while I devoured Internet information trying to find answers. He was sick more often, would stay up all night, and so began a bad, downhill spiral that now seems like a blur. My second child was also born during this time. As we tried to figure out what could be wrong with Sammy, I was terrified for my new baby girl Sofia. I had read that if you have one child with autism, there was up to a 30-percent chance siblings could be affected. I was juggling a lot at the time, and it was hard to accept there was something really wrong with my beautiful boy. Sammy’s official autism diagnosis was confirmed at 2 years and nine months. Although his father, a physician, and I were fairly certain he had autism well before that, the delay in obtaining a diagnosis occurred because it took several months before we were able to get an appointment with a developmental pediatrician. By that time, we had already started programs at the Southwest Autism Research and Resource Center (SARRC), where I learned that the best way to teach Sammy and other children with autism is through a strategy called Applied Behavior Analysis (ABA). I didn’t just learn this in theory, I saw it in practice. Like many kids with autism, Sammy was extremely difficult to engage and had very scary tantrums when people tried to connect with him. At SARRC, I got to watch a highly trained therapist work with Sammy through closed-circuit television over a period of several weeks. The difference was nothing short of amazing. Here was my child,

My immersion into the world of raising a child with special needs began when my son Sammy was about 15 months, when I saw major regression in his development. As I did my research, I was heartbroken and terrified when I feared he probably had autism. At first, Sammy seemed to be the most delightful 20 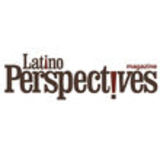