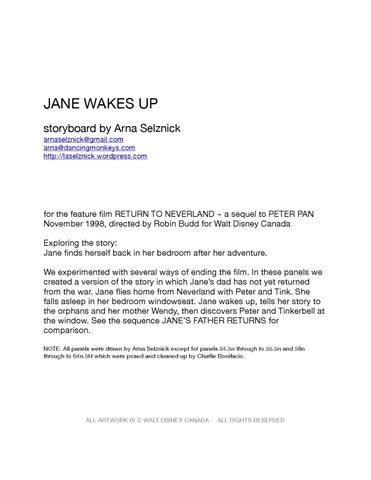 for the feature film RETURN TO NEVERLAND ~ a sequel to PETER PAN November 1998, directed by Robin Budd for Walt Disney Canada Exploring the story: Jane finds herself back in her bedroom after her adventure. We experimented with several ways of ending the film. In these panels we created a version of the story in which Jane’s dad has not yet returned from the war. Jane flies home from Neverland with Peter and Tink. She falls asleep in her bedroom windowseat. Jane wakes up, tells her story to the orphans and her mother Wendy, then discovers Peter and Tinkerbell at the window. See the sequence JANE’S FATHER RETURNS for comparison. NOTE: All panels were drawn by Arna Selznick except for panels 54.5n through to 55.5n and 58n through to 64n.5H which were posed and cleaned up by Charlie Bonifacio.

ALL ARTWORK IS © WALT DISNEY CANADA

An alternative story exploration for the ending of the feature film RETURN TO NEVERLAND, produced by Walt Disney Canada. This storyboard sample is by Arna Selznick. 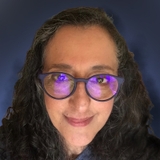