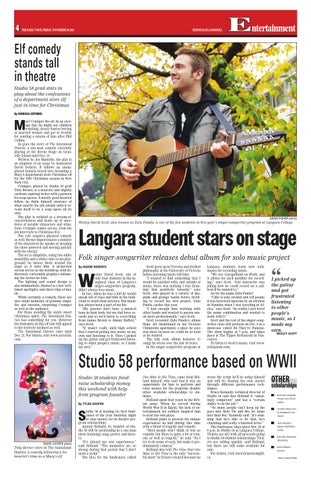 eet Crumpet the elf. In an average day, he might see children vomiting, sleazy Santas leering at married women and get in trouble for sending a swarm of fans after Phil Collins. So goes the story of The Santaland Diaries, a one-man comedy currently playing at the Revue Stage on Granville Island until Dec. 21. Written by Joe Mantello, the play is an adaption of an essay by humourist David Sedaris. It follows an unemployed Sedaris forced into becoming a Macy’s department store Christmas elf for the 1991 Christmas season in New York City. Crumpet, played by Studio 58 grad Toby Berner, is a neurotic and slightly sardonic aspiring writer with a passion for soap operas. A mostly good-hearted fellow, he finds himself unaware of what exactly the job entails until it reveals itself to be a soap opera all its own. The play is stylized as a stream-ofconsciousness and made up of anecdotes of notable characters and situations Crumpet comes across, from his job interview to Christmas Eve. The role requires physical comedy as well. Berner impersonates a number of the characters he speaks of, keeping the show powered and moving quickly with his energy. The set is simplistic, using two white monoliths and a white cube as his playground; he moves them around the stage as it suits him. A projection screen serves as the backdrop, with deliberately cartoonish graphics enhancing the stories he tells. The lighting and sound design is also minimalistic, limited to a few welltimed spotlights and short clips of music. While certainly a comedy, there are also small moments of genuine empathy and emotion, surprising Crumpet as well as the audience. For those avoiding the sickly sweet Christmas spirit, The Santaland Diaries has something for you. However the humanity in this elf tale will appeal to the festively inclined as well. The Santaland Diaries runs until Dec. 21. For tickets, visit www.artsclub. com.

Wesley David Scott, also known as Zulu Panda, is one of the few students in this year’s singer-songwriter program at Langara College.

esley David Scott, one of only four students in the inaugural class of Langara’s singer-songwriter program, didn’t always love music. In fact, when he was a kid he would sneak out of class and hide in the bathroom to avoid choir practice. But music has always been a part of his life. “My parents don’t have a musical bone in their body, but my dad loves records and so we’d listen to everything from James Brown to Jimmy Buffett,” says Scott. “It wasn’t really until high school that I started getting into music on my own and listening to it. Then I picked up the guitar and got frustrated listening to other people’s music, so I made my own.”

Scott grew up in Victoria and studied philosophy at the University of Victoria before pursuing music full time. “I wanted to find something that I would be satisfied with, and outside of music, there was nothing I was [leaning] that positively towards,” says Scott, who played in a variety of ska, punk and grunge bands before deciding to record his own project, Zulu Panda, earlier this year. “I had enough time working with other bands and wanted to pursue music more professionally,” says Scott. Scott recorded Zulu Panda’s album Hope All Abandoned in his Victoria Chinatown apartment, a place he says was ideal because he could be as loud as he wanted. The folk rock album features 13 songs he wrote over the last 10 years. In the singer-songwriter program at

Langara, students learn new techniques for recording music. “We use GarageBand on iPads, and it allows for such mobility for recording,” says Scott. “Our instructor was joking how he could record on a sailboat if he wanted to.” As for the name Zulu Panda? “I like to joke around and tell people it was bestowed upon me by an old man in Namibia when I was traveling in Africa,” says Scott. “In reality, I just loved the name combination and wanted to work with it.” Scott and the rest of the singer-songwriter class will perform on Dec. 6 in a showcase called B4 They’re Famous. The show begins at 7 p.m. and takes place at The Tipper Restaurant in Vancouver. To listen to Scott’s music, visit www. zulupanda.com.

I picked up the guitar and got frustrated listening to other people’s music, so I made my own.

Toby Berner stars in The Santaland Diaries, a comedy following a humourist’s time as a Macy’s elf.

tudio 58 is hosting its first fundraiser of the year Saturday night to raise money for its theatre program scholarships. Antony Holland, 93, founder of Studio 58 will be performing in a one-man show featuring song, poetry and history. “It’s [about] my war experiences,” said Holland. “The memories are so strong during that period that I don’t need a script.” The idea for the fundraiser, called

One Man in His Time, came from Holland himself, who said that it was an opportunity for him to perform and raise money for the program, despite other available scholarships to students. Holland spent four years in the British army. When he served during World War II in Egypt, the lack of entertainment for soldiers inspired him to start his own plays. Holland plans to present the unique experiences he had during this time with a blend of tragedy and comedy. “Most people don’t think of war as comedy, but there is quite a lot of comedy as well as tragedy,” he said. “So I try to do some of each, but make it predominately comical.” Holland also told The Voice that One Man in His Time is the only “successful show” he’ll have created because he

wrote the script he’ll be using himself and will be sharing his own stories through different performance techniques. Bruce Kennedy, technical director of Studio 58 said that Holland is “amazingly competent” and has a “certain ability to do the job.” “So many people can’t keep up the pace into their 70s and 80s, let alone into their 90s,” Kennedy said. “It’s stunning that he’s able to do that, he’s charming and really a talented actor.” The fundraiser takes place Nov. 30 at 8 p.m. in Studio 58 at Langara College. Tickets are $25 with all proceeds going to Studio 58 student scholarships. Tickets are selling quickly, said Holland, but there are still some available for sale. For tickets, visit www.ticketstonight. ca. 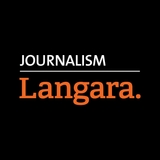