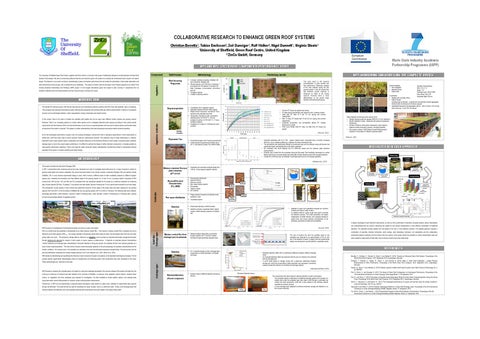 Systems Technologies” that aims at enhancing traditional intensive and extensive green roof systems by revisiting the fundamental basis of green roof system plant performance during drought, with a renewed focus on aesthetics. The project is funded under the European Union People programme as a Marie Curie Industry Academia Partnerships and Pathways (IAPP) project. It is the largest international green roof project to date, involving 11 researchers from an academic institution and a commercial partner and has a long time span, running over 4 years.

design. The objective is to provide a profound understanding of green roof system performance that will enable the optimization of stormwater attenuation and

As for the hydrological performance of green roofs, the existing knowledge is derived from field or laboratory experiments in which observations of rainfall and runoff have been used to derive empirical ‘black-box’ performance functions. The predictive value of these relationships is, however, restricted to each study’s specific system configuration and climatic influences. As the individual influence of each system component (plant, substrate, drainage layer) is lost in the overall system performance, it is difficult to optimise the design of either individual components or complete systems to

thickness. There is an increasing pressure to include native species and to investigate alternative plant species according to their optimal growth

MF on HLS MF on SCS

The project is divided into three Work Packages (WP).

In WP1 a standardized plant screening protocol has been developed and used to investigate plant performance for a range of species in relation to growing media depth and moisture availability. The protocol has been tested in two climatic contexts: continental (Stuttgart, DE) and maritime climate (Sheffield, UK). A cross factorial experimental design is used, which involves 3 different levels of water availability obtained by different irrigation regimes (low, moderate and abundant) and three different depth of the growing medium (5, 10 and 15 cm). A growing medium composed of 55%

crushed brick, 30% pumice, 10% coir fibre and 5% composted bark was specifically adopted for the project as a reference substrate not containing peat. 46 plant species (29 forbs, 10 grasses, 7 succulents) have been tested. Spaces of sowing was 10 cm to permit plant interaction at an early stage. The arrangement of plant species in each module was determined randomly. At this stage of the project data have been collected for two growing

seasons (2010 and 2011) in the University of Sheffield site and one growing season (2011) at ZinCo in Germany. The following data were collected:

•  Amended substrates with 10 to 15% organic material (peat, composted bark or biochar) increased WHCmax, but no statistical difference in between the three amendment rates •  The permeability was significantly effected by amendment type and all substrate mixes with biochar had significantly higher permeability than all the other substrates •  No correlation was found between the FLL WHCmax values and the pressure plate extraction measurements •  Dramatic loss of water from the substrates during the first week. Plant aesthetics decreased in a similar fashion and all non‐succulent plants were dead after 35 days following onset of the drought treatment •  A higher FLL WHCmax was not reflected in prolonged plant survival or increased aesthetics

properties of the system, to enable modelling and system design.

meet specific performance objectives. There is the need for single component based understanding of performance linked to fundamental physical

In this context, there is the need to broaden the available plant palette that can be used under different climatic regimes and growing medium

components of the system is required. This relates to a better understanding of the plant physiology and growing medium physical properties.

The main result is the rigorous characterization of plant species and their performance. Preliminary analysis of the data collected during the first growing season in the UK showed that leaf extension growth response is influenced by depth of the rooting medium. However there is clear differentiation at this growth stage between horticultural plant groups.

requirements and their tolerance limits to environmental stress. A new focus on evapotranspiration and inter-event moisture balance and transfer within

INTRODUCTION The demand for extensive green roofs that are less resource and maintenance-intensive systems and which have high aesthetic value is increasing.

The University of Sheffield Green Roof Centre, together with ZinCo GmbH, is involved in the project “Collaborative Research and Development of Green Roof

ü  Small-scale laboratory rainfall simulator •  Detention in green roof substrates increases as a function of depth and organic matter content. •  A modified reservoir routing model was used to simulate the detention process. The model parameters are largely independent of rainfall intensity, and it appears feasible to predict them from known physical characteristics of the substrate, specifically its depth and permeability.

referred to as its field capacity, WHCmax. Any excess rainwater is temporarily stored within large air pores, but will typically drain from the roof under gravity within two hours. This temporary storage effect is referred to as detention, and it provides an important stormwater management function through delaying and reducing the impacts of storm peaks on sewer systems or watercourses. It depends on substrate physical characteristics (‘vertical’ detention) and drainage layer characteristics (‘horizontal’ detention). During dry periods, the substrate will then lose moisture gradually as a result of plant evapotranspiration. The rate at which moisture content decreases depends on the plant physiology, the substrate characteristics and the

climatic conditions. The moisture level in the substrate can decrease to the level that that plants experience drought-stress. The soil structure and the

pore size distribution characterize its moisture release behaviour or pF curve (Kasmin et al., 2010; Stovin et al., 2012). WP2 aimed at understanding and quantifying the influence of each component of green roof systems on the described hydrological processes. For this

The rate of moisture flux from the synthetic layers to the substrate was observed to be approximately 0.12-0.14 mm/ day, in the absence of plants. A greatly improved experimental design was developed to provide definitive, repeatable results.

-  Moderate detention effect with no significance difference between different drainage layers -  An increased detention effect was observed with the use of a moisture mat combined with the drainage layer. -  A runoff model based on storage routing and a power-law relationship between storage and runoff and incorporating a delay parameter was developed. A sensitivity analysis showed the influence of roof slope and drainage material.

These methodologies are described on the right.

Furthermore, in WP3 we are implementing a physically-based hydrological model specific for green roofs, validated on experimental data acquired through the field tests. The model will also be used for simulating the impact of green roofs on a catchment scale. Finally, novel drainage layers that enhance retention and detention and novel substrate enhanced with amendments have been tested in this phase of the project.

A deeper knowledge of each element’s performance, as well as of the combination of elements (complete system), allows interpretation and understanding that can result in enhancing the system by new product development or more effective combination of traditional elements. The described process restarts from the testing of the new or more effective solutions. The adopted approach requires a combination of expertise including horticulture, plant ecology, plant physiology, hydrology, civil engineering and the collaborative partnership between academia and the industry. Also the duration of the project allows the possibility to collect representative data and when needed to repeat series of tests after more promising solutions have been determined.

purpose specific experimental methodologies aimed at characterizing and enhancing green roofs components have been developed in this study.

WP2 focused on investigating the hydrological processes occurring in a green roof system.

Two components have been tested to optimize detention in green roof systems. -  The proposed system is alternative to traditional drainage systems and consists of a shallow tank under the substrate layer that collect runoff through a perforated top surface and store temporarily runoff with a slow release to the drainage network regulated by hydraulic devices. -  A novel drainage layer designed to enhance temporary storage and detention is at the moment under test. 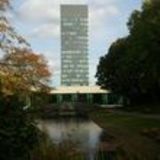