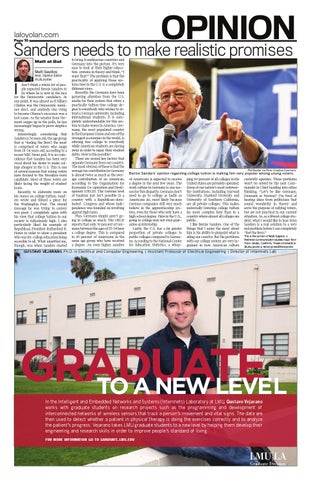 don’t think a whole lot of people expected Bernie Sanders to be where he is now in the race for the Democratic candidacy. At one point, it was almost as if Hillary Clinton was the Democratic nominee elect, and anybody else vying to become Obama’s successor was a lost cause. As the senator from Vermont surges up in the polls, he has increasingly begun to prove skeptics wrong. Interestingly, considering that Sanders is 74 years old, the age group that is “feeling the Bern”, the most is comprised of voters who range from 18-34 years old, according to a recent NBC News poll. It is no coincidence that Sanders has been very vocal about his desire to make college cheaper in the U.S. This is one of several reasons that young voters have flocked to the Brooklyn-born candidate. Most of these voters are likely facing the weight of student loans. Recently, to elaborate more on his stance on college tuition, Sanders wrote and filmed a piece for the Washington Post. The overall message he was trying to convey was great. I completely agree with his view that college tuition in our society is ridiculously high. I also particularly liked his example of Republican President Rutherford B. Hayes in order to show a president who was for college education being accesible to all. What unsettled me, though, was when Sanders started

to bring Scandinavian countries and Germany into the picture. It’s very easy to look at their higher education systems in theory and think, “I want that!” The problem is that the practicality of applying those systems here in the U.S. is a completely different story. Recently, the Germans have been garnering attention from the U.S. media for their system that offers a practically tuition-free college degree to everybody who wishes to attend a German university, including international students. It is completely understandable for this system to make waves in America. Germany, the most populated country in the European Union and one of the strongest economies in the world, is offering free college to everybody while American students are slaving away in order to repay their student debts. How is this possible? There are several key factors that separate Germany from our country. The most obvious of these is that the average tax contribution in Germany is almost twice as much as the average contribution of an American, according to the Organisation for Economic Co-operation and Development (OECD). The German level of taxation just isn’t possible in a country with a Republican-dominated Congress and whose independence was founded on revolting against high taxes. Plus, Germans simply aren’t going to college as much. The OECD reports that only 30 percent of Germans between the ages of 25-34 have a college degree. This is compared to 45 percent of Americans in the same age group who have received a degree. An even higher number

Bernie Sanders’ opinion regarding college tuition is making him very popular among young voters. of Americans is expected to receive a degree in the next few years. The work culture in Germany is one reason for this disparity. Germans don’t need to go to college as badly as Americans do, most likely because German companies still very much believe in the apprenticeship system, even for those who only have a high school degree. Here in the U.S., going to college may not even guarantee an internship. Lastly, the U.S. has a far greater proportion of private colleges to public colleges compared to Germany. According to the National Center for Education Statistics, a whop-

ping 60 percent of all colleges in the United States are privately operated. Some of our nation’s most noteworthy institutions, including Harvard University, Stanford Unversity and University of Southern California, are all private colleges. This makes universally lowering college tuition far more complex here than in a country where almost all colleges are public. I like Bernie Sanders. One of the things that I enjoy the most about him is his ability to pinpoint what is ailing our country. But the problems with our college system are very ingrained in how American culture

currently operates. These problems won’t be solved by the next Commander in Chief heading into office thinking, “Let’s be like Germany, Denmark or Norway.” I’m tired of hearing ideas from politicians that sound wonderful in theory and serve the purpose of rallying voters, but are not practical in our current situation. So, as a liberal college student, what I would like to hear from Sanders is a real solution to a very real problem before I can completely “feel the Bern.” This is the opinion of Matt Gaydos, a freshman communication studies major from Palos Verdes, California. Tweet comments to @LALoyolan or email jjones@theloyolan.

GRADUATE TO A NEW LEVEL In the Intelligent and Embedded Networks and Systems (Intemnets) Laboratory at LMU, Gustavo Vejarano works with graduate students on research projects such as the programming and development of interconnected networks of wireless sensors that track a person’s movement and vital signs. The data are then used to detect whether a patient in physical therapy is doing the exercises correctly and to analyze the patient’s progress. Vejarano takes LMU graduate students to a new level by helping them develop their engineering and research skills in order to improve people’s standard of living. for more information go to graduate.lmu.edu 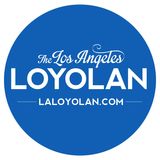