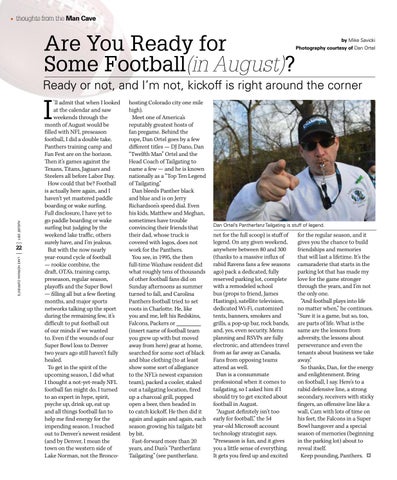 thoughts from the Man Cave

Are You Ready for Some Football(in August)?

Ready or not, and I’m not, kickoff is right around the corner

’ll admit that when I looked at the calendar and saw weekends through the month of August would be filled with NFL preseason football, I did a double take. Panthers training camp and Fan Fest are on the horizon. Then it’s games against the Texans, Titans, Jaguars and Steelers all before Labor Day. How could that be? Football is actually here again, and I haven’t yet mastered paddle boarding or wake surfing. Full disclosure, I have yet to go paddle boarding or wake surfing but judging by the weekend lake traffic, others surely have, and I’m jealous. But with the now nearly year-round cycle of football — rookie combine, the draft, OTA’s, training camp, preseason, regular season, playoffs and the Super Bowl — filling all but a few fleeting months, and major sports networks talking up the sport during the remaining few, it’s difficult to put football out of our minds if we wanted to. Even if the wounds of our Super Bowl loss to Denver two years ago still haven’t fully healed. To get in the spirit of the upcoming season, I did what I thought a not-yet-ready NFL football fan might do, I turned to an expert in hype, spirit, psyche up, drink up, eat up and all things football fan to help me find energy for the impending season. I reached out to Denver’s newest resident (and by Denver, I mean the town on the western side of Lake Norman, not the Bronco-

hosting Colorado city one mile high). Meet one of America’s reputably greatest hosts of fan pregame. Behind the rope, Dan Ortel goes by a few different titles — DJ Dano, Dan “Twelfth Man” Ortel and the Head Coach of Tailgating to name a few — and he is known nationally as a “Top Ten Legend of Tailgating.” Dan bleeds Panther black and blue and is on Jerry Richardson’s speed dial. Even his kids, Matthew and Meghan, sometimes have trouble convincing their friends that their dad, whose truck is covered with logos, does not work for the Panthers. You see, in 1995, the then full-time Waxhaw resident did what roughly tens of thousands of other football fans did on Sunday afternoons as summer turned to fall, and Carolina Panthers football tried to set roots in Charlotte. He, like you and me, left his Redskins, Falcons, Packers or ________ (insert name of football team you grew up with but moved away from here) gear at home, searched for some sort of black and blue clothing (to at least show some sort of allegiance to the NFL’s newest expansion team), packed a cooler, staked out a tailgating location, fired up a charcoal grill, popped open a beer, then headed in to catch kickoff. He then did it again and again and again, each season growing his tailgate bit by bit. Fast-forward more than 20 years, and Dan’s “Pantherfanz Tailgating” (see pantherfanz.

net for the full scoop) is stuff of legend. On any given weekend, anywhere between 80 and 300 (thanks to a massive influx of rabid Ravens fans a few seasons ago) pack a dedicated, fully reserved parking lot, complete with a remodeled school bus (props to friend, James Hastings), satellite television, dedicated Wi-Fi, customized tents, banners, smokers and grills, a pop-up bar, rock bands, and, yes, even security. Menu planning and RSVPs are fully electronic, and attendees travel from as far away as Canada. Fans from opposing teams attend as well. Dan is a consummate professional when it comes to tailgating, so I asked him if I should try to get excited about football in August. “August definitely isn’t too early for football,” the 54 year-old Microsoft account technology strategist says. “Preseason is fun, and it gives you a little sense of everything. It gets you fired up and excited

for the regular season, and it gives you the chance to build friendships and memories that will last a lifetime. It’s the camaraderie that starts in the parking lot that has made my love for the game stronger through the years, and I’m not the only one. “And football plays into life no matter when,” he continues. “Sure it is a game, but so, too, are parts of life. What is the same are the lessons from adversity, the lessons about perseverance and even the tenants about business we take away.” So thanks, Dan, for the energy and enlightenment. Bring on football, I say. Here’s to a rabid defensive line, a strong secondary, receivers with sticky fingers, an offensive line like a wall, Cam with lots of time on his feet, the Falcons in a Super Bowl hangover and a special season of memories (beginning in the parking lot) about to reveal itself. Keep pounding, Panthers.