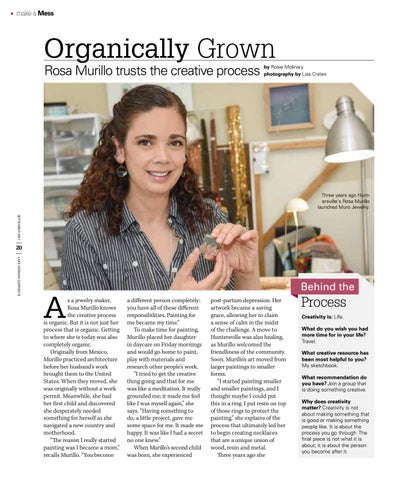 Behind the s a jewelry maker, Rosa Murillo knows the creative process is organic. But it is not just her process that is organic. Getting to where she is today was also completely organic. Originally from Mexico, Murillo practiced architecture before her husband’s work brought them to the United States. When they moved, she was originally without a work permit. Meanwhile, she had her first child and discovered she desperately needed something for herself as she navigated a new country and motherhood. “The reason I really started painting was I became a mom,” recalls Murillo. “You become

a different person completely; you have all of these different responsibilities. Painting for me became my time.” To make time for painting, Murillo placed her daughter in daycare on Friday mornings and would go home to paint, play with materials and research other people’s work. “I tried to get the creative thing going and that for me was like a meditation. It really grounded me; it made me feel like I was myself again,” she says. “Having something to do, a little project, gave me some space for me. It made me happy. It was like I had a secret no one knew.” When Murillo&#39;s second child was born, she experienced

post-partum depression. Her artwork became a saving grace, allowing her to claim a sense of calm in the midst of the challenge. A move to Huntersville was also healing, as Murillo welcomed the friendliness of the community. Soon, Murillo’s art moved from larger paintings to smaller forms. “I started painting smaller and smaller paintings, and I thought maybe I could put this in a ring. I put resin on top of those rings to protect the painting,” she explains of the process that ultimately led her to begin creating necklaces that are a unique union of wood, resin and metal. Three years ago she