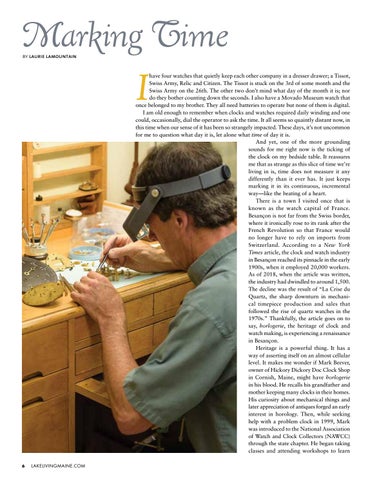 Marking Time I by laurie lamountain

have four watches that quietly keep each other company in a dresser drawer; a Tissot, Swiss Army, Relic and Citizen. The Tissot is stuck on the 3rd of some month and the Swiss Army on the 26th. The other two don’t mind what day of the month it is; nor do they bother counting down the seconds. I also have a Movado Museum watch that once belonged to my brother. They all need batteries to operate but none of them is digital. I am old enough to remember when clocks and watches required daily winding and one could, occasionally, dial the operator to ask the time. It all seems so quaintly distant now, in this time when our sense of it has been so strangely impacted. These days, it’s not uncommon for me to question what day it is, let alone what time of day it is. And yet, one of the more grounding sounds for me right now is the ticking of the clock on my bedside table. It reassures me that as strange as this slice of time we’re living in is, time does not measure it any differently than it ever has. It just keeps marking it in its continuous, incremental way—like the beating of a heart. There is a town I visited once that is known as the watch capital of France. Besançon is not far from the Swiss border, where it ironically rose to its rank after the French Revolution so that France would no longer have to rely on imports from Switzerland. According to a New York Times article, the clock and watch industry in Besançon reached its pinnacle in the early 1900s, when it employed 20,000 workers. As of 2018, when the article was written, the industry had dwindled to around 1,500. The decline was the result of “La Crise du Quartz, the sharp downturn in mechanical timepiece production and sales that followed the rise of quartz watches in the 1970s.” Thankfully, the article goes on to say, horlogerie, the heritage of clock and watch making, is experiencing a renaissance in Besançon. Heritage is a powerful thing. It has a way of asserting itself on an almost cellular level. It makes me wonder if Mark Beever, owner of Hickory Dickory Doc Clock Shop in Cornish, Maine, might have horlogerie in his blood. He recalls his grandfather and mother keeping many clocks in their homes. His curiosity about mechanical things and later appreciation of antiques forged an early interest in horology. Then, while seeking help with a problem clock in 1999, Mark was introduced to the National Association of Watch and Clock Collectors (NAWCC) through the state chapter. He began taking classes and attending workshops to learn