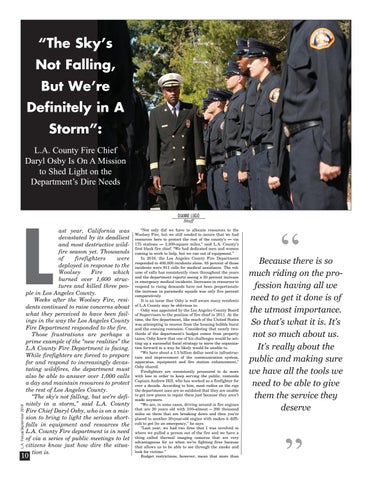 “The Sky’s Not Falling, But We’re Definitely in A Storm”: L.A. County Fire Chief Daryl Osby Is On A Mission to Shed Light on the Department’s Dire Needs

ast year, California was devastated by its deadliest and most destructive wildfire season yet. Thousands of firefighters were deployed in response to the Woolsey Fire which burned over 1,600 structures and killed three people in Los Angeles County. Weeks after the Woolsey Fire, residents continued to raise concerns about what they perceived to have been failings in the way the Los Angeles County Fire Department responded to the fire. Those frustrations are perhaps a prime example of the “new realities” the L.A County Fire Department is facing. While firefighters are forced to prepare for and respond to increasingly devastating wildfires, the department must also be able to answer over 1,000 calls a day and maintain resources to protect the rest of Los Angeles County. “The sky’s not falling, but we’re definitely in a storm,” said L.A. County Fire Chief Daryl Osby, who is on a mission to bring to light the serious shortfalls in equipment and resources the L.A. County Fire department is in need of via a series of public meetings to let citizens know just how dire the situation is.

“Not only did we have to allocate resources to the Woolsey Fire, but we still needed to assure that we had resources here to protect the rest of the county’s – via 175 stations – 2,300-square miles,” said L.A. County’s first black fire chief. “We had dedicated men and women coming to work to help, but we ran out of equipment.” In 2018, the Los Angeles County Fire Department responded to 400,000 incidents alone. 85 percent of those incidents were 911 calls for medical assistance. The volume of calls has consistently risen throughout the years and the department reports seeing a 50 percent increase in emergency medical incidents. Increases in resources to respond to rising demands have not been proportional— the increase in paramedic squads was only five percent comparatively. It is an issue that Osby is well aware many residents of L.A County may be oblivious to. Osby was appointed by the Los Angeles County Board of Supervisors to the position of fire chief in 2011. At the time, the fire department, like much of the United States was attempting to recover from the housing bubble burst and the ensuing recession. Considering that nearly twothirds of the department’s budget comes from property taxes, Osby knew that one of his challenges would be setting up a successful fiscal strategy to move the organization forward in a way he likely would be unable to. “We have about a 1.5 billion dollar need in infrastructure and improvement of the communication system, apparatus, equipment and fire station enhancement,” Osby shared. Firefighters are consistently pressured to do more with less in order to keep serving the public, contends Captain Andrew Hill, who has worked as a firefighter for over a decade. According to him, most radios on the rigs the department uses are so outdated that they are unable to get new pieces to repair them just because they aren’t made anymore. “We are, in some cases, driving around in fire engines that are 20 years old with 100—almost — 200 thousand miles on them that are breaking down and then you’re placed in another 20-year-old engine with makes it difficult to get [to an emergency,” he says. “Last year, we had two fires that I was involved in where we pulled a person out of the fire and we have a thing called thermal imaging cameras that are very advantageous for us when we’re fighting fires because that allows us to be able to see through the smoke and look for victims.” Budget restrictions, however, mean that more than

Because there is so much riding on the profession having all we need to get it done is of the utmost importance. So that’s what it is. It’s not so much about us. It’s really about the public and making sure we have all the tools we need to be able to give them the service they deserve