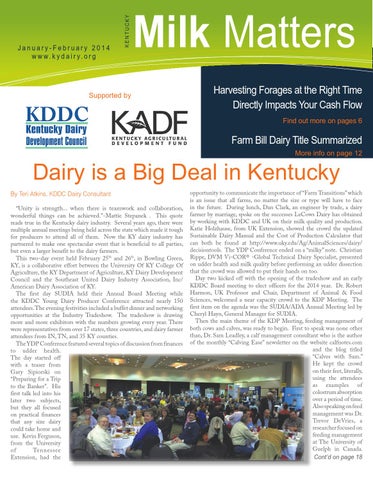 Dairy is a Big Deal in Kentucky By Teri Atkins, KDDC Dairy Consultant “Unity is strength... when there is teamwork and collaboration, wonderful things can be achieved.”-Mattie Stepanek . This quote reads true in the Kentucky dairy industry. Several years ago, there were multiple annual meetings being held across the state which made it tough for producers to attend all of them. Now the KY dairy industry has partnered to make one spectacular event that is beneficial to all parties, but even a larger benefit to the dairy farmers. This two-day event held February 25th and 26th, in Bowling Green, KY, is a collaborative effort between the University Of KY College Of Agriculture, the KY Department of Agriculture, KY Dairy Development Council and the Southeast United Dairy Industry Association, Inc/ American Dairy Association of KY. The first day SUDIA held their Annual Board Meeting while the KDDC Young Dairy Producer Conference attracted nearly 150 attendees. The evening festivities included a buffet dinner and networking opportunities at the Industry Tradeshow. The tradeshow is drawing more and more exhibitors with the numbers growing every year. There were representatives from over 17 states, three countries, and dairy farmer attendees from IN, TN, and 35 KY counties. The YDP Conference featured several topics of discussion from finances to udder health. The day started off with a teaser from Gary Sipiorski on “Preparing for a Trip to the Banker”. His first talk led into his later two subjects, but they all focused on practical finances that any size dairy could take home and use. Kevin Ferguson, from the University of Tennessee Extension, had the

opportunity to communicate the importance of “Farm Transitions” which is an issue that all farms, no matter the size or type will have to face in the future. During lunch, Dan Clark, an engineer by trade, a dairy farmer by marriage, spoke on the successes LeCows Dairy has obtained by working with KDDC and UK on their milk quality and production. Katie Holzhause, from UK Extension, showed the crowd the updated Sustainable Dairy Manual and the Cost of Production Calculator that can both be found at http://www.uky.edu/Ag/AnimalSciences/dairy/ decisiontools. The YDP Conference ended on a “milky” note. Christian Rippe, DVM Vi-COR® -Global Technical Dairy Specialist, presented on udder health and milk quality before preforming an udder dissection that the crowd was allowed to put their hands on too. Day two kicked off with the opening of the tradeshow and an early KDDC Board meeting to elect officers for the 2014 year. Dr. Robert Harmon, UK Professor and Chair, Department of Animal &amp; Food Sciences, welcomed a near capacity crowd to the KDP Meeting. The first item on the agenda was the SUDIA/ADA Annual Meeting led by Cheryl Hayn, General Manager for SUDIA. Then the main theme of the KDP Meeting, feeding management of both cows and calves, was ready to begin. First to speak was none other than, Dr. Sam Leadley, a calf management consultant who is the author of the monthly “Calving Ease” newsletter on the website calfnotes.com and the blog titled “Calves with Sam.” He kept the crowd on their feet, literally, using the attendees as examples of colostrum absorption over a period of time. Also speaking on feed management was Dr. Trevor DeVries, a researcher focused on feeding management at The University of Guelph in Canada. Cont’d on page 18