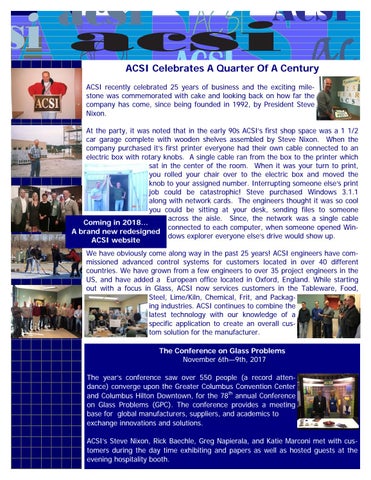 ACSI Celebrates A Quarter Of A Century ACSI recently celebrated 25 years of business and the exciting milestone was commemorated with cake and looking back on how far the company has come, since being founded in 1992, by President Steve Nixon. At the party, it was noted that in the early 90s ACSI’s first shop space was a 1 1/2 car garage complete with wooden shelves assembled by Steve Nixon. When the company purchased it’s first printer everyone had their own cable connected to an electric box with rotary knobs. A single cable ran from the box to the printer which sat in the center of the room. When it was your turn to print, you rolled your chair over to the electric box and moved the knob to your assigned number. Interrupting someone else’s print job could be catastrophic! Steve purchased Windows 3.1.1 along with network cards. The engineers thought it was so cool you could be sitting at your desk, sending files to someone across the aisle. Since, the network was a single cable Coming in 2018… connected to each computer, when someone opened WinA brand new redesigned dows explorer everyone else’s drive would show up. ACSI website We have obviously come along way in the past 25 years! ACSI engineers have commissioned advanced control systems for customers located in over 40 different countries. We have grown from a few engineers to over 35 project engineers in the US, and have added a European office located in Oxford, England. While starting out with a focus in Glass, ACSI now services customers in the Tableware, Food, Steel, Lime/Kiln, Chemical, Frit, and Packaging industries. ACSI continues to combine the latest technology with our knowledge of a specific application to create an overall custom solution for the manufacturer. The Conference on Glass Problems November 6th—9th, 2017 The year’s conference saw over 550 people (a record attendance) converge upon the Greater Columbus Convention Center and Columbus Hilton Downtown, for the 78th annual Conference on Glass Problems (GPC). The conference provides a meeting base for global manufacturers, suppliers, and academics to exchange innovations and solutions. ACSI’s Steve Nixon, Rick Baechle, Greg Napierala, and Katie Marconi met with customers during the day time exhibiting and papers as well as hosted guests at the evening hospitality booth.

“Meltdown” and “Spectre” Vulnerabilities The recent software patches for the Meltdown and Spectre vulnerabilities, released by Microsoft, have been proven to cause issues with Rockwell Automation and Wonderware software products. ACSI recommends these patches are not installed on running system. The affected windows update numbers are: KB4056896, KB4056890, KB4056892, KB4056895, KB4056898 and KB4056899. See attached pdfs, in this email, for additional information.

Annual Chili Cook Off ACSI once again held it’s annual Chili Cook Off. The competition was fierce this year with a record number of new entries. Although all pots tasted great, only three could be victorious. And the winners are.. Best Spicy Jon Nash Best Creativity Frank Lepkowski Best Overall Chili Rob Snider

Started at ACSI: May 2016 University &amp; Major: University of Toledo, Electrical Engineering Interests: Reading, Working out at Toledo&#39;s REC Center, Geocaching, &amp; Playing Volleyball after work Best Thing About Being An ACSI Intern: I would say the best thing about being an ACSI intern is how helpful everyone is. Regardless of who you ask, everyone will do their best to not only teach you what they know, but make sure you learn it and understand it for yourself

Started at ACSI: May 2017 University &amp; Major: Dual Major in Electrical Engineering and Computer Science Interests: Astronomy, Programming, and Video Games Best thing about being an ACSI intern: The best thing about working at ACSI is the great work experience and the exposure to different programs and new learning opportunities

Started at ACSI: May 2017 University &amp; Major: University of Toledo, Electrical Engineering Interests: Sailing, Backpacking, Traveling, and Photography. Best thing about being an ACSI intern: Everyone in the office is willing to help everyone else get up to speed on things they are the most familiar with and will answer the questions I have. There is very much a team mentality in the office, everyone wants the entire group to succeed

The Newsletter is published throughout the year. All rights reserved by ACSI. Editor: Katie Marconi, 419.843.4820 katiemarconi@acsitoledo.com. To unsubscribe, email a request to the Editor. www.acsitoledo.com