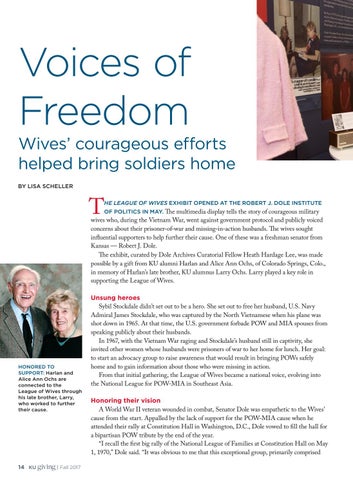 Voices of Freedom Wives’ courageous efforts helped bring soldiers home BY LISA SCHELLER HE LEAGUE OF WIVES EXHIBIT OPENED AT THE ROBERT J. DOLE INSTITUTE OF POLITICS IN MAY. The multimedia display tells the story of courageous military wives who, during the Vietnam War, went against government protocol and publicly voiced concerns about their prisoner-of-war and missing-in-action husbands. The wives sought influential supporters to help further their cause. One of these was a freshman senator from Kansas — Robert J. Dole. The exhibit, curated by Dole Archives Curatorial Fellow Heath Hardage Lee, was made possible by a gift from KU alumni Harlan and Alice Ann Ochs, of Colorado Springs, Colo., in memory of Harlan’s late brother, KU alumnus Larry Ochs. Larry played a key role in supporting the League of Wives.

HONORED TO SUPPORT: Harlan and Alice Ann Ochs are connected to the League of Wives through his late brother, Larry, who worked to further their cause.

Unsung heroes Sybil Stockdale didn’t set out to be a hero. She set out to free her husband, U.S. Navy Admiral James Stockdale, who was captured by the North Vietnamese when his plane was shot down in 1965. At that time, the U.S. government forbade POW and MIA spouses from speaking publicly about their husbands. In 1967, with the Vietnam War raging and Stockdale’s husband still in captivity, she invited other women whose husbands were prisoners of war to her home for lunch. Her goal: to start an advocacy group to raise awareness that would result in bringing POWs safely home and to gain information about those who were missing in action. From that initial gathering, the League of Wives became a national voice, evolving into the National League for POW-MIA in Southeast Asia. Honoring their vision A World War II veteran wounded in combat, Senator Dole was empathetic to the Wives’ cause from the start. Appalled by the lack of support for the POW-MIA cause when he attended their rally at Constitution Hall in Washington, D.C., Dole vowed to fill the hall for a bipartisan POW tribute by the end of the year. “I recall the first big rally of the National League of Families at Constitution Hall on May 1, 1970,” Dole said. “It was obvious to me that this exceptional group, primarily comprised

KU Giving is published by KU Endowment, the private fundraising foundation for the University of Kansas. We welcome your comments, suggestions and questions. Contact the editor at kugiving@kuendowment.org or 785-832-7347. 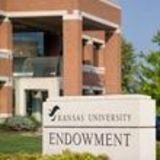