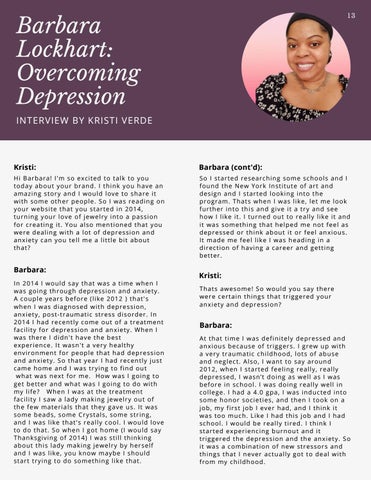 Hi Barbara! I&#39;m so excited to talk to you today about your brand. I think you have an amazing story and I would love to share it with some other people. So I was reading on your website that you started in 2014, turning your love of jewelry into a passion for creating it. You also mentioned that you were dealing with a lot of depression and anxiety can you tell me a little bit about that?

So I started researching some schools and I found the New York Institute of art and design and I started looking into the program. Thats when I was like, let me look further into this and give it a try and see how I like it. I turned out to really like it and it was something that helped me not feel as depressed or think about it or feel anxious. It made me feel like I was heading in a direction of having a career and getting better.

Barbara: In 2014 I would say that was a time when I was going through depression and anxiety. A couple years before (like 2012 ) that&#39;s when I was diagnosed with depression, anxiety, post-traumatic stress disorder. In 2014 I had recently come out of a treatment facility for depression and anxiety. When I was there I didn&#39;t have the best experience. It wasn&#39;t a very healthy environment for people that had depression and anxiety. So that year I had recently just came home and I was trying to find out what was next for me.Â How was I going to get better and what was I going to do with my life? When I was at the treatment facility I saw a lady making jewelry out of the few materials that they gave us. It was some beads, some Crystals, some string, and I was like that&#39;s really cool. I would love to do that. So when I got home (I would say Thanksgiving of 2014) I was still thinking about this lady making jewelry by herself and I was like, you know maybe I should start trying to do something like that.

Kristi: Thats awesome! So would you say there were certain things that triggered your anxiety and depression?

Barbara: At that time I was definitely depressed and anxious because of triggers. I grew up with a very traumatic childhood, lots of abuse and neglect. Also, I want to say around 2012, when I started feeling really, really depressed, I wasnâ&amp;#x20AC;&amp;#x2122; t doing as well as I was before in school. I was doing really well in college. I had a 4.0 gpa, I was inducted into some honor societies, and then I took on a job, my first job I ever had, and I think it was too much. Like I had this job and I had school. I would be really tired. I think I started experiencing burnout and it triggered the depression and the anxiety. So it was a combination of new stressors and things that I never actually got to deal with from my childhood.

Experience Enchantment is a lifestyle magazine for Christian Mompreneurs. Main topics covered in every issue are Faith, Family, & Fun. In this issue you will find stories on Spiritual battle, getting the help you need, and capsule wardrobes.