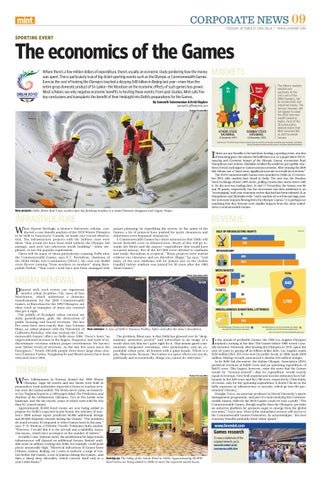 The economics of the Games Where there’s a few million dollars of expenditure, there’s usually an economic study pondering how the money was spent. This is particularly true of big­ticket sporting events such as the Olympic or Commonwealth Games. Even as the cost of hosting the Olympics touched a dizzying $40 billion in Beijing last year—more than the entire gross domestic product of Sri Lanka—the literature on the economic effects of such games has grown. Most scholars see only negative economic benefits to hosting these events. From past studies, Mint culls five key conclusions and transplants the benefit of their hindsight into Delhi’s preparations for the Games.

The Athens markets reacted very positively to the city's win of the 2004 Olympics, led by construction and industrial stocks. The Sensex, however, did not appear to value the 2010 Commonwealth award as highly; most of the 20 constructionrelated stocks that Mint surveyed fell, as did the overall Sensex.

Data sources: ‘The 2004 Olympic Games announcement and its effect on the Athens and Milan stock exchanges,’ by Nikolaos Veraros, Evangelia Kasimati and Peter Dawson; and Ashwin Ramarathinam/Mint

f there are any benefits to be had from hosting a sporting event, one line of reasoning goes, the market will sniff them out. In a paper titled The Financing and Economic Impact of the Olympic Games, economists Brad Humphreys and Andrew Zimbalist recalled the small but perceptible reactions of stock exchanges to Games announcements. After winning the 2004 bid, Athens saw a “short-term, significant increase in overall stock returns”. The 2010 Commonwealth Games were awarded to Delhi on 13 November 2003, after markets had closed in India. The next day, the Bombay Stock Exchange closed 1.68% lower, pulling construction stocks down with it. On the next two trading days, 15 and 17 November, the Sensex rose 46 and 29 points, respectively, but the movement was then attributed to an “encouraging” mid-year economic review that had just been released. If, as Humphreys and Zimbalist write, “stock markets do not forecast large positive economic impacts flowing from the Olympic Games,” it is perhaps not surprising that they forecast even smaller impacts from the more scaleddown Commonwealth Games. New projects: Delhi Metro Rail Corp. workers give the finishing touches to a tunnel between Jangpura and Lajpat Nagar.

hen Lillehammer in Norway hosted the 1994 Winter Olympics, large ski resorts and star hotels were built in preparation; local authorities expected a boom in tourism revenue once the Games ended. The boom never came, as researcher Jon Tiegland found in a 1999 paper titled The Predictions and Realities of the Lillehammer Olympics. Two in five hotels went bankrupt, and the ski resorts, some of which were sold for less than $1, stayed empty. Approximately 30,000 hotel rooms are now being added to prepare for Delhi’s expected tourist boom; the ministry of tourism’s 2008 annual report predicted 40,000 additional foreign and 60,000 domestic tourists during the Games. “The numbers do stand scrutiny if compared to other Games hosts in the past,” says. P. R. Srinivas, a Deloitte Touche Tohmatsu India analyst. “However, I would link it to the aircraft seat availability issues, visa issues…which have an impact on the number of visitors.” In India’s case, Srinivas notes, the justification for large tourist infrastructure will depend on additional factors; limited available seats on airlines coming into India, for example, could push prices unnaturally high. “Historical indications of Games hosts (Athens, Sydney, Beijing, etc.) seem to indicate a surge of visitors before the Games, a sort of plateau during the Games…and then a sharp drop thereafter, which corrects itself only in a Gearing up: The lobby of the Ashok Hotel in Delhi. Approximately 30,000 year’s time frame.” hotel rooms are being added in Delhi to meet the expected tourist boom.

lanned well, such events can regenerate derelict urban localities. The cases of East Manchester, which underwent a dramatic transformation for the 2002 Commonwealth Games, or Barcelona for the 1992 Olympics, are often cited as examples of inner-city renewal that got it right. The pitfalls of ill-judged urban renewal are stark: gentrification, graft, the destruction of public housing, and forced evictions. The last five years have seen exactly that, says Gautam Bhan, an urban planner with the University of New contours: A view of Delhi’s Yamuna Pushta, before and after the slum’s demolition. California-Berkeley, who has tracked the Commonwealth Games’ effect on Delhi since 2004. There’s been “an The problem, Bhan says, is that Delhi has glossed over its “deep, unprecedented increase in the degree, frequency and scale of in- endemic, persistent poverty” and subscribed to an image of a discriminate evictions without proper resettlement. We haven’t world-class city that isn’t quite right for it. That means gated comseen [these] levels of evictions…in the last five years since the munities, integrated townships, river promenades, and an exEmergency.” Nearly 400,000 people from three large slum clus- pendable urban poor, all fronted with a glass façade. Which is a ters (Yamuna Pushta, Nanglamachi and Bhatti mines) have been pity, Bhan notes, because “the Games is a space where you can do, relocated since 2004. politically and economically, things you cannot do otherwise.”

proper planning, by reprofiling the streets. In the name of the Games, a lot of projects have pushed for quick clearances and sometimes even bypassed clearances.” A Commonwealth Games fact sheet announces that Delhi will invest Rs26,000 crore in infrastructure. Much of this will go towards the Metro and the airport—expenditure that would have occurred anyway. But of the Rs7,000 crore allotted to stadiums and roads, Ravindran is sceptical. “Many projects were started without our clearance and are therefore illegal,” he says. “And many of the new stadiums will be junked just as the [Indira Gandhi] indoor stadium was junked for 20 years after the 1982 Asian Games.”

hen Darren McHugh, a Queen’s University scholar, conducted a cost-benefit analysis of the 2010 Winter Olympics to be held in Vancouver, Canada, he made one crucial observation. The infrastructure projects with the heftiest costs were those “that would not have been built without the Olympic bid attempt, and were not otherwise worth building”—white elephants, to use the popular euphemism. There will be many of these pachyderms roaming Delhi after the Commonwealth Games, says K.T. Ravindran, chairman of the Delhi Urban Arts Commission (DUAC). He cites one Rs800 crore flyover running “from nowhere to nowhere” along Barapullah Nullah. “That route could have just been managed with

MISCELLANEOUS (DONATIONS, LOTTERIES) 0 300 The 2003 estimate of revenues, as per the bid document of Indian Olympic Association

The 2009 figures, as per the Comptrolles and Auditor General’s report on the Commonwealth Games Source: Society of Indian Automobile Manufacturers

n the annals of profitable Games, the 1984 Los Angeles Olympics marked a turning of the tide. The Games before 1984 weren’t usually lucrative; Montreal, after hosting the Olympics in 1976, spent the next 20 years in paying off its billion-dollar debt. Los Angeles made $250 million (Rs1,165 crore now) in profit; Seoul, in 1988, made $300 million; Beijing recently announced a slender $16 million margin. In its 2003 bid document, the Indian Olympic Association (IOA) predicted revenues of Rs840 crore and an operating expenditure of Rs635 crore. This August, however, came the news that the Games would be “revenue-neutral”—that its expenditure would exactly equal its revenue. Now both expense and income estimates have ballooned, to Rs1,620 crore and Rs1,708 crore, respectively. (This holds, of course, only for the operating expenditure; it doesn’t factor in the hefty expenses on infrastructure or security, which go into the government’s books.) Douglas Turco, an associate professor in Drexel University’s sports management programme, and part of a team studying the Commonwealth Games, believes the 2010 Games could yet turn a profit. “The Commonwealth Games, though smaller than the Olympics, provides an attractive platform for sponsors eager to emerge from the global recession,” Turco says. Most of the immediate revenue will accrue to the Commonwealth Games Federation, he acknowledges; “the host economy benefits primarily from visitor spend.”

Games research To view a slideshow of the original research, go to www.livemint.com/ commonwealth.htm

The economics of the games

The economics of the games