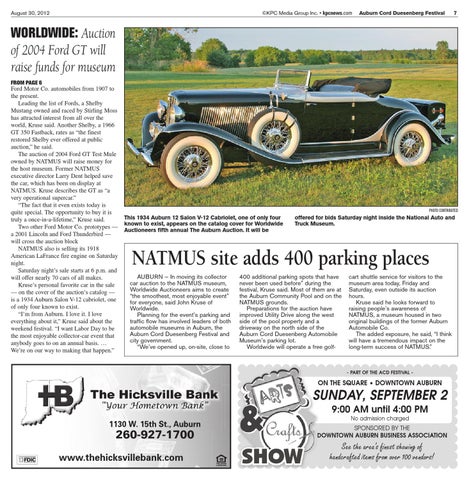 WORLDWIDE: Auction of 2004 Ford GT will raise funds for museum FROM PAGE 6

Ford Motor Co. automobiles from 1907 to the present. Leading the list of Fords, a Shelby Mustang owned and raced by Stirling Moss has attracted interest from all over the world, Kruse said. Another Shelby, a 1966 GT 350 Fastback, rates as “the finest restored Shelby ever offered at public auction,” he said. The auction of 2004 Ford GT Test Mule owned by NATMUS will raise money for the host museum. Former NATMUS executive director Larry Dent helped save the car, which has been on display at NATMUS. Kruse describes the GT as “a very operational supercar.” “The fact that it even exists today is quite special. The opportunity to buy it is truly a once-in-a-lifetime,” Kruse said. Two other Ford Motor Co. prototypes — a 2001 Lincoln and Ford Thunderbird — will cross the auction block NATMUS also is selling its 1918 American LaFrance fire engine on Saturday night. Saturday night’s sale starts at 6 p.m. and will offer nearly 70 cars of all makes. Kruse’s personal favorite car in the sale — on the cover of the auction’s catalog — is a 1934 Auburn Salon V-12 cabriolet, one of only four known to exist. “I’m from Auburn. I love it. I love everything about it,” Kruse said about the weekend festival. “I want Labor Day to be the most enjoyable collector-car event that anybody goes to on an annual basis. … We’re on our way to making that happen.”

This 1934 Auburn 12 Salon V-12 Cabriolet, one of only four known to exist, appears on the catalog cover for Worldwide Auctioneers fifth annual The Auburn Auction. It will be

offered for bids Saturday night inside the National Auto and Truck Museum.

NATMUS site adds 400 parking places AUBURN — In moving its collector car auction to the NATMUS museum, Worldwide Auctioneers aims to create “the smoothest, most enjoyable event” for everyone, said John Kruse of Worldwide. Planning for the event’s parking and traffic flow has involved leaders of both automobile museums in Auburn, the Auburn Cord Duesenberg Festival and city government. “We’ve opened up, on-site, close to

400 additional parking spots that have never been used before” during the festival, Kruse said. Most of them are at the Auburn Community Pool and on the NATMUS grounds. Preparations for the auction have improved Utility Drive along the west side of the pool property and a driveway on the north side of the Auburn Cord Duesenberg Automobile Museum’s parking lot. Worldwide will operate a free golf-

cart shuttle service for visitors to the museum area today, Friday and Saturday, even outside its auction hours. Kruse said he looks forward to raising people’s awareness of NATMUS, a museum housed in two original buildings of the former Auburn Automobile Co. The added exposure, he said, “I think will have a tremendous impact on the long-term success of NATMUS.”

- PART OF THE ACD FESTIVAL -

ON THE SQUARE • DOWNTOWN AUBURN

See the area’s finest showing of handcrafted items from over 100 vendors!

The Auburn Cord Duesenberg Festivalmarks its 57th year today throughSunday in Auburn.Whether you’re attending your firstfestival, or you’ve been here since thebeginning, we hope you will enjoy ourguide to this year’s events and thehistory behind them. 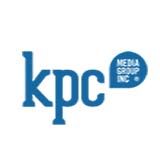