The Northern Hawk - A 10-year point of pride for CVRF 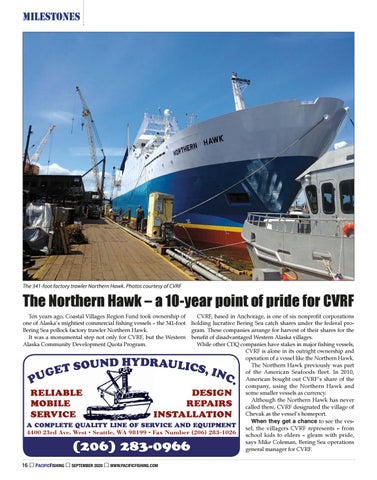 The Northern Hawk – a 10-year point of pride for CVRF CVRF, based in Anchorage, is one of six nonprofit corporations Ten years ago, Coastal Villages Region Fund took ownership of one of Alaska’s mightiest commercial fishing vessels – the 341-foot holding lucrative Bering Sea catch shares under the federal proBering Sea pollock factory trawler Northern Hawk. gram. These companies arrange for harvest of their shares for the It was a monumental step not only for CVRF, but the Western benefit of disadvantaged Western Alaska villages. Alaska Community Development Quota Program. While other CDQ companies have stakes in major fishing vessels, CVRF is alone in its outright ownership and operation of a vessel like the Northern Hawk. The Northern Hawk previously was part of the American Seafoods fleet. In 2010, American bought out CVRF’s share of the company, using the Northern Hawk and some smaller vessels as currency. DESIGN RELIABLE Although the Northern Hawk has never REPAIRS MOBILE called there, CVRF designated the village of Chevak as the vessel’s homeport. INSTALLATION SERVICE When they get a chance to see the vesA COMPLETE QUALITY LINE OF SERVICE AND EQUIPMENT sel, the villagers CVRF represents – from 4400 23rd Ave. West • Seattle, WA 98199 • Fax Number (206) 283-1026 school kids to elders – gleam with pride, says Mike Coleman, Bering Sea operations general manager for CVRF.

“They know it’s their boat,” he says. “They’re not leasing the boat.” The Northern Hawk is a sophisticated fishing machine. Capable of catching and processing millions of pounds of pollock at sea, the vessel carries a crew of 128 people plus two fishery observers. The factory ship produces a variety of products including fillets, roe, fishmeal, and oil.

The Northern Hawk at sea A few villagers, maybe five to 10 each season, work aboard the Northern Hawk, Coleman says. But like most other large Alaska fishing vessels, the crew is global. You can find Filipino, Mexican, Vietnamese, Polish, Senegalese, and other multicultural crewmembers aboard. That presents a challenge for the galley staff who must cater to varied diets. Last spring, the Northern Hawk completed its five-year certification at Lake Union Drydock Co. in Seattle. This fall, the Northern Hawk will install a new winch for towing a live-feed camera to help avoid bycatch. From the beginning, CVRF has itself operated the Northern Hawk. CVRF also does its own product marketing into Europe and Asia. There were skeptics at first that a CDQ company could own and operate such a ship. “It was kinda rough the first couple of years as far as the industry accepting us,” says Coleman. “We’ve proven ourselves.” 

Releasing pollock from the net

MARINE REFRIGERATION &amp; PLUMBING SUPPLIES EVERYTHING YOU NEED TO DO THE JOB RIGHT

The Northern Hawk - A 10-year point of pride for CVRF

Pacific Fishing published its feature on the Northern Hawk in the latest edition of the magazine highlighting the vessel history, the winch installation to prevent bycatch, its recent drydock at Lake Union, and how Coastal Villages Region Fund provides benefits to its communities, 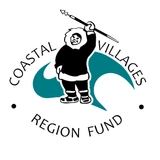