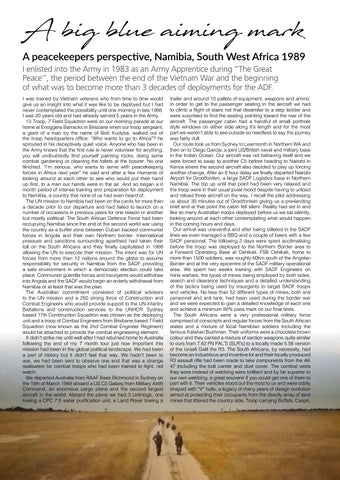 A peacekeepers perspective, Namibia, South West Africa 1989 I enlisted into the Army in 1983 as an Army Apprentice during “The Great Peace”, the period between the end of the Vietnam War and the beginning of what was to become more than 3 decades of deployments for the ADF. I was trained by Vietnam veterans who from time to time would give us an insight into what it was like to be deployed but I had never contemplated the possibility until one morning in late 1988. I was 20 years old and had already served 5 years in the Army. 13 Troop, 7 Field Squadron were on our morning parade at our home at Enoggera Barracks in Brisbane when our troop sergeant, a giant of a man by the name of Bob Kudyba, walked out of the troop headquarters office. “Who wants to go to Africa”? he sprouted in his deceptively quiet voice. Anyone who has been in the Army knows that the first rule is never volunteer for anything, you will undoubtedly find yourself painting rocks, doing some combat gardening or cleaning the toilets at the boozer. No one flinched. “I’m serious, who wants to serve with peacekeeping forces in Africa next year” he said and after a few moments of looking around at each other to see who would put their hand up first, to a man our hands were in the air. And so began a 6 month period of intense training and preparation for deployment to Namibia, a country that none of us had even heard of. The UN mission to Namibia had been on the cards for more than a decade prior to our departure and had failed to launch on a number of occasions in previous years for one reason or another but mostly political. The South African Defence Force had been occupying Namibia since the end of the second world war using the country as a buffer zone between Cuban backed communist forces in Angola and their own Northern border. International pressure and sanctions surrounding apartheid had taken their toll on the South Africans and they finally capitulated in 1988 allowing the UN to execute their mission. The intent was for UN forces from more than 12 nations around the globe to assume responsibility for security in Namibia from the SADF providing a safe environment in which a democratic election could take place. Communist guerrilla forces and insurgents would withdraw into Angola and the SADF would begin an orderly withdrawal from Namibia or at least that was the plan. The Australian commitment consisted of political advisors to the UN mission and a 250 strong force of Construction and Combat Engineers who would provide support to the UN infantry Battalions and construction services to the UNHCR. Sydney based 17th Construction Squadron was chosen as the deploying unit and a troop of Combat Engineers from Brisbane based 7 Field Squadron (now known as the 2nd Combat Engineer Regiment) would be attached to provide the combat engineering element. It didn’t strike me until well after I had returned home to Australia following the end of my 7 month tour just how important this mission had been in the global political landscape. We had been a part of history but it didn’t feel that way. We hadn’t been to war, we had been sent to observe one and that was a strange realisation for combat troops who had been trained to fight, not watch. We departed Australia from RAAF Base Richmond in Sydney on the 18th of March 1989 aboard a US C5 Galaxy from Military Airlift Command, an enormous cargo plane and the second largest aircraft in the world. Aboard the plane we had 3 Unimogs, one towing a CPC 7.5 water purification unit, a Land Rover towing a

trailer and around 10 pallets of equipment, weapons and ammo. In order to get to the passenger seating in the aircraft we had to climb a flight of stairs not that dissimilar to a step ladder and were surprised to find the seating pointing toward the rear of the aircraft. The passenger cabin had a handful of small porthole style windows on either side along it’s length and for the most part we weren’t able to see outside so needless to say the journey was fairly dull. Our route took us from Sydney to Learmonth in Northern WA and then on to Diego Garcia, a joint US/British naval and military base in the Indian Ocean. Our aircraft was not behaving itself and we were forced to swap to another C5 before heading to Nairobi in Kenya where the second aircraft also decided to play up forcing another change. After an 8 hour delay we finally departed Nairobi Airport for Grootfontien, a large SADF Logistics base in Northern Namibia. The trip up until that point had been very relaxed and the troop were in their usual jovial mood despite having to unload and reload three aircraft on the way. I recall the pilot addressing us about 30 minutes out of Grootfontein giving us a pre-landing brief and at that point the cabin fell silent. Reality had set in and like so many Australian troops deployed before us we sat silently, looking around at each other contemplating what would happen in the coming hours and days. Our arrival was uneventful and after being billeted in the SADF lines we even managed a BBQ and a couple of beers with a few SADF personnel. The following 2 days were spent acclimatising before the troop was deployed to the Northern Border area to a Forward Operating Base at Oshikati. FSB Oshikati, home to more than 1500 soldiers, was roughly 60km south of the Angolan Border and at the very epicentre of the SADF military operational area. We spent two weeks training with SADF Engineers on mine warfare, the types of mines being employed by both sides, search and clearance techniques and a detailed understanding of the tactics being used by insurgents to target SADF troops and vehicles. No less than 52 different types of mines, both anti personnel and anti tank, had been used during the border war and we were expected to gain a detailed knowledge of each one and achieve a minimum 90% pass mark on our final tests. The South Africans were a very professional military force comprised of conscripts and regular forces from the South African states and a mixture of local Namibian soldiers including the famous Kalahari Bushmen. Their uniforms were a chocolate brown colour and they carried a mixture of section weapons quite similar to ours from 7.62 FN FAL’S (SLR’s) to a locally made 5.56 version of the Israeli Galil the R3. The South Africans, by necessity, had become an industrious and inventive lot and their locally produced R3 assault rifle had been made to take components from the AK 47 including the bolt carrier and dust cover. The combat vests they wore instead of webbing were brilliant and by far superior to our own webbing, a great souvenir if you could get one of them to part with it. Their vehicles stood out the most to us and were oddly shaped with “V” hulls, a legacy of many years of design evolution aimed at protecting their occupants from the deadly array of land mines that littered the country side. Troop carrying Buffels, Caspir,