The Friends of Kinneil Annual Report 2006-07 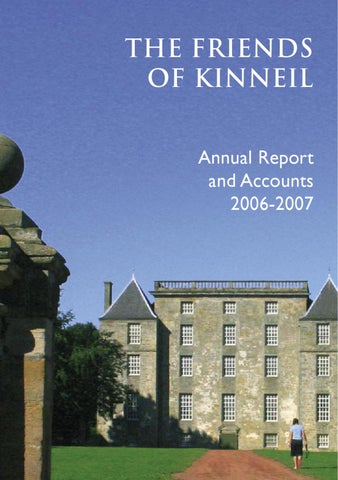 THE FRIENDS OF KINNEIL Annual Report and Accounts 2006-2007

Welcome to the first annual report of The Friends of Kinneil.

At the inaugural meeting of The Friends, the following members were elected to the Management Committee:

The group was set up in 2006 to “support and promote the development of Kinneil House, Kinneil Museum and the surrounding estate and area . . . and to enhance and protect the heritage of that area”.

In our first year we’ve met many of those objectives. We’ve helped to improve access to Kinneil House through free open days, run in conjunction with Historic Scotland. We’ve boosted the numbers of people visiting Kinneil Museum and campaigned for a brighter future for the facility.

At the first Management Committee meeting the following office bearers were appointed:

And we’ve made people more aware of the fantastic asset that is Kinneil Estate.

Most importantly, we’ve done this without any grant aid from the Lottery or public sector. It’s a reflection on the hard work of our members and Management Committee that we’ve achieved so much on a small budget.

During the year Mark Bauer, William Bundy, Jacqueline Bundy and Tommy Timms had to leave the committee due to personal commitments. However, the management team was delighted to co-opt member Dallas McCormack.

In this document, we’ll set out our achievements - and look forward to the years ahead. ADRIAN MAHONEY, Chairman -2-

First steps . . . The Friends of Kinneil was officially launched at the Barony Theatre, Bo’ness, on Tuesday, May 16, 2006. However work to establish the group started months earlier. A steering committee organised a free guided walk around Kinneil Estate to encourage people to join the new, not-for-profit group. Ian Scott of Falkirk Local History Society provided an excellent tour around the key attractions: Kinneil House, James Watt’s Cottage, the medieval Kinneil Church and the Kinneil Roman Fortlet. The event - on Easter Monday 2006 - attracted around 60 people, some of whom joined the Friends at the first formal meeting a few weeks later.

CVS Falkirk and District - which supports the voluntary sector in this area - helped the steering committee organise the first meeting and draw up a draft constitution, which was adopted with a small amendment on May 16. We are grateful to CVS chief executive Pandora Summerfield and her team for all their support over the past year. The committee was also fortunate to attract David Breeze of Historic Scotland to be the guest speaker at the first meeting. He talked about his work to support the Government’s bid to turn the Antonine Wall (which runs through Kinneil) into a World Heritage Site. And, so, a new group was born.

Easter Monday 2006: The Friends launch event - a guided tour around Kinneil Estate. Our picture shows participants at the Roman fortlet at Kinneil with historian Ian Scott. The Friends of Kinneil was formally constituted at its inaugural meeting in May 2006.

Campaign work A key part of the Friendsâ&amp;#x20AC;&amp;#x2122; activities in 2006 was to campaign for the retention of Kinneil Museum. In February 2006 Falkirk Council unveiled proposals to close the museum and transfer part of its function to the Hippodrome Cinema - a new heritage facility being restored in the centre of Boâ&amp;#x20AC;&amp;#x2122;ness. The Friends of Kinneil organised a petition, urging Falkirk Council to keep the museum open. This attracted around 2,300 signatures. The Friends also carried out

detailed research into public perceptions about the museum and the surrounding Kinneil Estate. Interviews were digitally recorded and saved onto CDs. These interviews formed the basis of a formal written submission to the Council, outlining the Friends opposition to the proposed closure and giving our suggestions for the future. This was submitted with the petition to Council officials in June 2006. The issues surrounding the proposed closure led to strong media interest - resulting in coverage on BBC Radio and

BBC Online - and in The Observer, the Bo’ness Journal, The Falkirk Herald and the museums’ and heritage press. There was also strong support and interest from the Roman re-enactment group, The Antonine Guard. The summer of 2006 saw MSPs back a motion in the Scottish Parliament calling for the museum to be “retained and enhanced”. In September 2006, representatives from the Friends of Kinneil and the Bo’ness Means Business group met with MSPs to discuss the campaign and overall heritage provision in Bo’ness. The meeting was hosted by local Labour MSP Cathy Peattie and attended by Donald Gorrie MSP (Liberal Democrat) and Margaret Mitchell MSP (Conservative).

respondents wanted to see the museum retained. The Council’s Environment and Heritage convener at the time, Councillor Robert Spears, said: &quot;We will continue to look at ways to improve visitor numbers at Kinneil, which have tended to remain on an average of 4,000 per year. But we believe there is potential for improving on this. The rich heritage of Bo&#39;ness has a huge amount to offer in terms of bringing visitors to this area and the benefits to the local economy.&quot; The Friends understand that visitor numbers to the museum have risen over the past year.

A week later members of Falkirk Council met again to discuss the proposed closure and decided to pull back from the original proposal. The local authority said that it would now improve the museum and look at ways to promote it. Councillors were told that independent research had found that 89 per cent of local

The Friends also supported the History Matters initiative, run by the National Trust and partners, by distributing badges and postcards to local people.

Events Over the past year The Friends of Kinneil have run a number of free events to raise the profile of Kinneil Estate. These were open to the general public. KINNEIL GUIDED WALK Easter 2006 - One hour historical tour of Kinneil Estate. Attracted more than 60 people. KINNEIL HERITAGE DAY September 2006 - Friends members supported Historic Scotland to provide free access to Kinneil House. Despite the poor weather, 197 people came in for a tour. HALLOWEâ&amp;#x20AC;&amp;#x2122;EN WEEKEND - October 2006 - The Friends

joined forces with Historic Scotland to provide free access to Kinneil House. Friends membersâ&amp;#x20AC;&amp;#x2122; were stationed in different rooms to tell the story of the House . . . and its ghost. Over six hours, across two days, 405 people came through the doors. The opening tied in with &quot;Make a Difference Day&quot; - a Government-backed initiative to encourage volunteering. FREE WEEKEND - April 2007 - For the first time ever, Historic Scotland opened Kinneil House for its Free Weekend. Again Friends of Kinneil volunteers provided information and a welcome to visitors. A total of 523 took advantage of the free tours.

are grateful to Geoff Bailey, Keeper of Archaeology and Local History, at Falkirk Council, for taking time out of his busy schedule to talk to members. Catering for the event was donated by Country Fayre, Bo’ness.

Falkirk Council provided its own support in kind by opening Kinneil Museum on Sundays for the free House openings.

We helped attract more than 1000 visitors to Kinneil House (left and above), which boasts some of the finest examples of Renaissance wall paintings in Scotland. We also provided a video and a virtual tour on our website: www.kinneil.org.uk -7-

Fundraising/promotional activity To attract visitors to Kinneil Estate, the Friends produced 5000 flyers promoting the estate to tourists. These were distributed to local visitor attractions and libraries. The Friends also worked with tourism groups such as Pride and Passion and Bonnie Boâ&amp;#x20AC;&amp;#x2122;ness to raise the profile of the Estate and attract more visitors. In addition, The Friends donated a Christmas tree and lights to Kinneil Museum last December. A website was launched at www.kinneil.org.uk - to promote the estate. It is hoped to develop the website in the year ahead. The Friends produced a range of postcards and notelets to sell at events and through local outlets. This brought in much-needed funds - and also helped to promote the Estate.

Membership During the year, 37 people joined The Friends of Kinneil, paying anything from £5 (concession) to £15 (family/couple) to join. Money raised from memberships brought in £280. We also attracted £401 in donations, mainly from members. We communicated with all members through regular mailings and member letters. We are grateful to Maria Ford, our Membership Secretary, and other members of the Management Committee, for all their hard work over the past year.

Management committee expenses were kept low, with none of the Management Committee claiming expenses for telephone calls and use of their computers. Printing and copying was also provided free of charge. The Chairman donated design work and photography to produce leaflets and other promotional items. Vice-Chair Lynn Munro hosted Management Committee meetings in her home - again at no charge. This has helped us build a surplus of funds for the year ahead, as our accounts overleaf show.

Autumn at the East Pond at Kinneil.

Annual accounts The Friends of Kinneil Receipts and Payments for the year ended April 30, 2007 Receipts

Surplus/Deficit for the year

Statement of Balances as at April 30th, 2007 Opening balance Surplus of

Closing bank balance of £483.25 (plus £20 cash in hand) Approved by the Management Committee and signed on their behalf Adrian Mahoney, Chairman, May 28, 2007

Sunset at the remains of the 12th century church at Kinneil.

The Friends of Kinneil acknowledges the support of the following organisations during 2006-2007:

Report produced by The PR Store on behalf of The Friends of Kinneil. Digitally printed by Brian Currie Printers, 81a East Main Street, Broxburn EH52 5EE

The West Pond at Kinneil Estate.

The Friends of Kinneil Annual Report 2006-07

The Friends of Kinneil Annual Report 2006-07. Find out more at www.kinneil.org.uk/friends