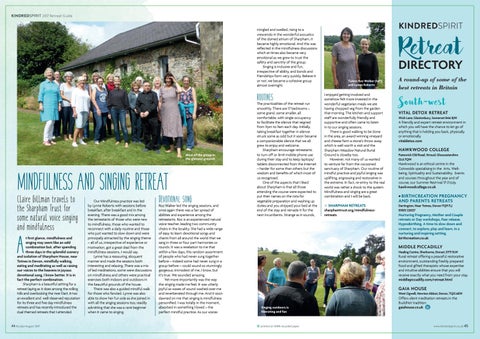 mingled and swelled, rising to a crescendo in the wonderful acoustics of the domed atrium of Sharpham, it became highly emotional. And this was reflected in the mindfulness discussions which at times also became very emotional as we grew to trust the safety and sanctity of the group. Singing is inclusive and fun, irrespective of ability, and bonds and friendships form very quickly. Believe it or not, we became a cohesive group almost overnight.

Most of the group in the glorious grounds

t first glance, mindfulness and singing may seem like an odd combination but, after spending three days in the splendid scenery and isolation of Sharpham House, near Totnes in Devon, mindfully walking, eating and meditating as well as raising our voices to the heavens in joyous devotional song, I know better. It is in fact the perfect combination. Sharpham is a beautiful setting for a retreat laying as it does among the rolling hills and overlooking the river Dart. It has an excellent and well-deserved reputation for its three and five day mindfulness retreats and has recently introduced the dual themed retreats that I attended.

Our Mindfulness practice was led by Lynne Roberts with sessions before breakfast, after breakfast and in the evening. There was a good mix among the retreatants of those who were new to mindfulness, those who wanted to reconnect with a daily routine and those who just wanted to slow down and were principally attracted by the singing theme – all of us, irrespective of experience or motivation, got a great deal from the mindfulness sessions, I would say. Lynne has a reassuring, eloquent manner and made the sessions both interesting and relaxing. There was a mix of led meditations, some were discussions on mindfulness and others were practical exercises both indoors and outdoors in the beautiful grounds of the house. There was also a guided mindful walk for those who fancied. Lynne was also able to show her fun side as she joined in with all the singing sessions too, readily admitting that she was a rank beginner when it came to singing.

Roz Walker led the singing sessions, and once again there was a fair spread of abilities and experience among the retreatants. Roz is an.experienced natural voice teacher, leading two community choirs in the locality. She had a wide range of easy to learn devotional songs and chants from all around the world that we sang in three or four part harmonies or rounds. It was a revelation to me that within a few days, this random assortment of people who had never sung together before – indeed some had never sung in a group before – could sound so stunningly gorgeous; immodest of me, I know, but it’s true. We sounded amazing. Yet more importantly was the way the singing made me feel. It was utterly joyful as waves of sound washed over me and reverberated through me. And it soon dawned on me that singing is mindfulness personified. I was totally in the moment, absorbed in something I loved – the perfect mindful practice. As our voices

The practicalities of the retreat run smoothly. There are 17 bedrooms – some grand, some smaller, all comfortable, with single occupancy to facilitate the silence that reigned from 9pm to 9am each day. Initially, taking breakfast together in silence struck some as odd but it soon became a companionable silence that we all grew to enjoy and welcome. Sharpham encourage retreatants to turn off or limit mobile phone use during their stay and to keep laptops/ tablets disconnected from the Internet – harder for some than others but the wisdom and benefits of which most of us recognised. One of the aspects that I liked about Sharpham is that all those attending the course were expected to put their names on the rota for vegetable preparation and washing up duties and you stripped your bed at the end of the stay and remade it for the next incumbents. Strange as it sounds,

A round-up of some of the best retreats in Britain

I enjoyed getting involved and somehow felt more invested in the wonderful vegetarian meals we ate having chopped veg from the garden that morning. The kitchen and support staff are wonderfully friendly and supportive and often came to listen in to our singing sessions. There is good walking to be done in the area, an award-winning vineyard and cheese farm a stone’s throw away which is well worth a visit and the Sharpham Meadow Natural Burial Ground is closeby too. However, not many of us wanted to venture far from the cocooned sanctuary of Sharpham. Our routine of mindful practice and joyful singing was uplifting, engrossing and restorative in the extreme. In fact, re-entry to the real world was rather a shock to the system. Mindfulness and singing are a great combination and I will be back.

A friendly and expert retreat environment in which you will have the chance to let go of anything that is holding you back, physically or emotionally. vitaldetox.com

Hawkwood is an ethical centre in the Cotswolds specialising in the Arts, Wellbeing, Spirituality and Sustainability. Events and courses throughout the year and of course, our Summer Rest-ival 17-21 July. hawkwoodcollege.co.uk

•BIRTHCREATION PREGNANCY AND PARENTS RETREATS Nurturing Pregnancy, Mother and Couple retreats or Day workshops, Fear release, Hypnobirthing. A time to slow down and connect, to explore, play and learn, in a nurturing and inspiring setting. birthcreation.co.uk

Rural retreat offering a peaceful restorative environment, outstanding freshly prepared food and gifted therapists whose expertise and intuitive abilities ensure that you will receive exactly what you need from your stay. middlepiccadilly.com/retreat.html

Singing outdoors is liberating and fun 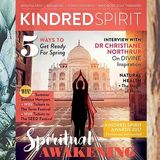