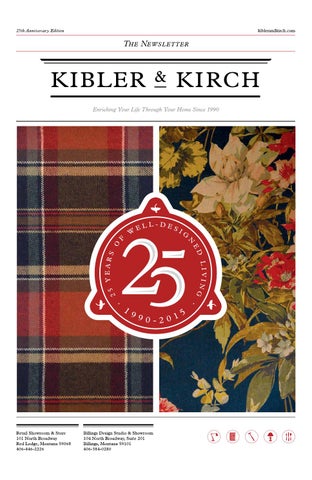 ORIGINALLY THERE WERE THREE FOUNDERS: ROSINA KASTELITZ, ANITA EVANS, AND ERICA HASH. THREE MONTHS AFTER OPENING THE GROUP TOOK ON JEAN FOSTER AS ANOTHER PARTNER. THE NAME KIBLER &amp; KIRCH PAYS TRIBUTE THE FAMILIES OF OUR FOUNDERS. ROSINA&#39;S MOTHER IS A “KIRCH” AND ANITA&#39;S MOTHER WAS A “KIBLER.”

Kibler &amp; Kirch accidently started when a truck load of furniture arrived in Red Lodge that was a “Hold For Confirmation” order. The owners had only taken notes on what they liked. Somehow, it went through the production chain and was shipped. The company acknowledged it was their mistake but didn’t want to pay for the shipping back. They asked us to try to sell the pieces and pay them as things sold! It was a financial blessing and propelled the owners to move forward with their dream.

THE DAY AS THEY SCOUR TO FIND SOULFUL ITEMS TO ADD TO THE COLLECTION AT THE STORE. WE JUST DON’T WANT TO MISS THE PERFECT THING.

school. He and Catherine married and moved to Asheville, NC where he worked as a librarian and studied every book in the library on architecture and interior design.

OUR BUYING TEAM IS ALWAYS THE LAST TO LEAVE MARKET FOR

Our creative director, Jeremiah Young, fell in love with Kibler &amp; Kirch when he was in high

ALONG WITH ALL THE WORK WE’VE DONE IN HELPED

Jeremiah’s assistant, Erica, worked in New York City for Country Living Magazine. We are happy she wanted to move home.

We pronounce our company name to rhyme with “Nibbler &amp; Birch” and, even though we love cookies, we don’t have anything to do with Keebler elves.

The original store had a slogan on the awning that came from Erica’s family. They had a ranch in North Dakota that the community referred to as “The Home Place” during The Great Depression, because the doors were always open for a warm meal or just a friendly face. Thus, Kibler &amp; Kirch: “The Home Place” was what we commonly called in early years.

Kacey &amp; Kelsey Jones are sisters that grew up on a ranch in Red Lodge. Kelsey worked at K&amp;K throughout high school and college and is now our Business Manager. Kacey is one of our designers and buyers. We love hiring employees raised on ranches because they really know the meaning of hard work.

OUR SWAN LOGO WAS DESIGNED BY A TRAVELLING ARTIST IN ONLY A FEW MINUTES. SEE PAGE 13 FOR THE WHOLE STORY!

Sara Holcomb and Diana Simon often work together in the retail store on Saturday. Sara is an accomplished potter, former director of a Kentucky children&#39;s museum and is the sister of founder Erica

We have used our own formula of red paint for 25 years, called

Hash. Diana has extensive experience in sales and

“Rosina Red.” The color, which has undertones of brown and black,

was formulated because (in the psychology of color) it is considered a “declassifier,” meaning that it appeals to people from all walks and ways of life.

for the two design studios as well as working with sales and marketing.

Design manager Kim Ferguson, who has been with us for 13 years, bakes every employee their favorite dessert on their birthday. That’s a lot of desserts!

OWNER DICK MCCOMISH HAS A PASSION FOR OUTDOOR FURNITURE AND KITCHENS! HIS WIFE KAREN, OF 40 YEARS, LOVES ANYTHING WITH A DRAGONFLY.

In 2010, owners Erica and Rosina decided to retire due to the economy. Ten days into the Closing Sale, Jeremiah and Catherine Young were in Kibler &amp; Kirch shopping and became aware of the situation. They walked up the

street and saw Catherine’s father Dick McComish and told him. That afternoon, he began discussions with the owners. In less than thirty days, the McComish family owned the business and kept on all of the staff.

Did you know that when our lovely delivery men, C.J. and Chris, bring in the new piece of furniture to your home they will move the old stuff to the basement—or wherever you want it? Sometimes you need help with the heavy stuff!

Dominique Paulus-Warner has worked with

Kibler &amp; Kirch for 17 years and is a nationally respected artist whose work was recently featured in the Birds In Art exhibition.

Amanda, one of our designers, spent some time in high school living with her father in a remote cabin without electricity or running water in Alaska. She also worked on a construction crew. What she learned really helps when she has to step onto a jobsite and tell a construction crew how to do it right!

Alyssa, our junior designer, recently RANCHER, WAS OUR FIRST DELIVERY

won the coveted Charette Award at

both have four children, love

MAN. HE DELIVERED OUR FURNITURE

NEOCON. She grew up in Powell, WY

IN A CARPETED HORSE TRAILER.

where she worked on her family’s

WHILE WE HAVE AN AMAZING RETAIL STORE, IT ONLY ACCOUNTS FOR 30% OF OUR BUSINESS. 70% OF WHAT WE DO IS DESIGN WORK.

T W E N T Y- T H R E E MIKE PHILIPS, KNOWN AS OUR &quot;RUG GUY&quot; HAS MOVED TO SEASONAL PART TIME WORK. WHEN HE IS IN TOWN, HE CAN BE FOUND WORKING THE STORE ON SUNDAYS.

24 Our current “Design for the Day” used to be called a “Playhouse Day” which was named as such because helping clients rework and reinvent their spaces, using everything they already had, reminded at least one of the owners how much fun she had playing house in her youth.

One of our staff members, Aileen Anderson, has been with us since the beginning. She’s outlasted everyone and we hope she brightens our store for another 25 years!

T H E K I B L E R &amp; K I RC H WAY # 2 1 We always think of a design project in terms of what it will look like when the newness fades (and it always fades). Some things become more beautiful as they age.

SERVICES: FROM BLUEPRINTS TO DINNER BY CANDLELIGHT!

Enriching your life through your home since 1990. 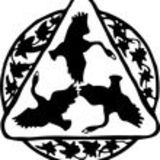