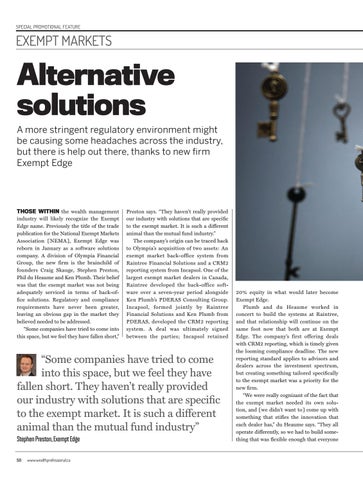 Alternative solutions A more stringent regulatory environment might be causing some headaches across the industry, but there is help out there, thanks to new firm Exempt Edge

THOSE WITHIN the wealth management industry will likely recognize the Exempt Edge name. Previously the title of the trade publication for the National Exempt Markets Association [NEMA], Exempt Edge was reborn in January as a software solutions company. A division of Olympia Financial Group, the new firm is the brainchild of founders Craig Skauge, Stephen Preston, Phil du Heaume and Ken Plumb. Their belief was that the exempt market was not being adequately serviced in terms of back-office solutions. Regulatory and compliance requirements have never been greater, leaving an obvious gap in the market they believed needed to be addressed. “Some companies have tried to come into this space, but we feel they have fallen short,”

Preston says. “They haven’t really provided our industry with solutions that are specific to the exempt market. It is such a different animal than the mutual fund industry.” The company’s origin can be traced back to Olympia’s acquisition of two assets: An exempt market back-office system from Raintree Financial Solutions and a CRM2 reporting system from Incapsol. One of the largest exempt market dealers in Canada, Raintree developed the back-office software over a seven-year period alongside Ken Plumb’s PDERAS Consulting Group. Incapsol, formed jointly by Raintree Financial Solutions and Ken Plumb from PDERAS, developed the CRM2 reporting system. A deal was ultimately signed between the parties; Incapsol retained

“Some companies have tried to come into this space, but we feel they have fallen short. They haven’t really provided our industry with solutions that are specific to the exempt market. It is such a different animal than the mutual fund industry” Stephen Preston, Exempt Edge 50

20% equity in what would later become Exempt Edge. Plumb and du Heaume worked in concert to build the systems at Raintree, and that relationship will continue on the same foot now that both are at Exempt Edge. The company’s first offering deals with CRM2 reporting, which is timely given the looming compliance deadline. The new reporting standard applies to advisors and dealers across the investment spectrum, but creating something tailored specifically to the exempt market was a priority for the new firm. “We were really cognizant of the fact that the exempt market needed its own solution, and [we didn’t want to] come up with something that stifles the innovation that each dealer has,” du Heaume says. “They all operate differently, so we had to build something that was flexible enough that everyone