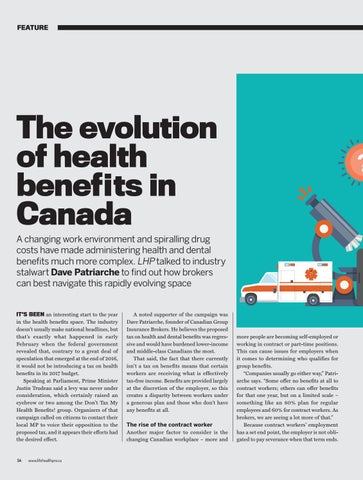 The evolution of health benefits in Canada A changing work environment and spiralling drug costs have made administering health and dental benefits much more complex. LHP talked to industry stalwart Dave Patriarche to find out how brokers can best navigate this rapidly evolving space IT’S BEEN an interesting start to the year in the health benefits space. The industry doesn’t usually make national headlines, but that’s exactly what happened in early February when the federal government revealed that, contrary to a great deal of speculation that emerged at the end of 2016, it would not be introducing a tax on health benefits in its 2017 budget. Speaking at Parliament, Prime Minister Justin Trudeau said a levy was never under consideration, which certainly raised an eyebrow or two among the Don’t Tax My Health Benefits! group. Organizers of that campaign called on citizens to contact their local MP to voice their opposition to the proposed tax, and it appears their efforts had the desired effect.

A noted supporter of the campaign was Dave Patriarche, founder of Canadian Group Insurance Brokers. He believes the proposed tax on health and dental benefits was regressive and would have burdened lower-income and middle-class Canadians the most. That said, the fact that there currently isn’t a tax on benefits means that certain workers are receiving what is effectively tax-free income. Benefits are provided largely at the discretion of the employer, so this creates a disparity between workers under a generous plan and those who don’t have any benefits at all.

more people are becoming self-employed or working in contract or part-time positions. This can cause issues for employers when it comes to determining who qualifies for group benefits. “Companies usually go either way,” Patriarche says. “Some offer no benefits at all to contract workers; others can offer benefits for that one year, but on a limited scale – something like an 80% plan for regular employees and 60% for contract workers. As brokers, we are seeing a lot more of that.” Because contract workers’ employment has a set end point, the employer is not obligated to pay severance when that term ends.