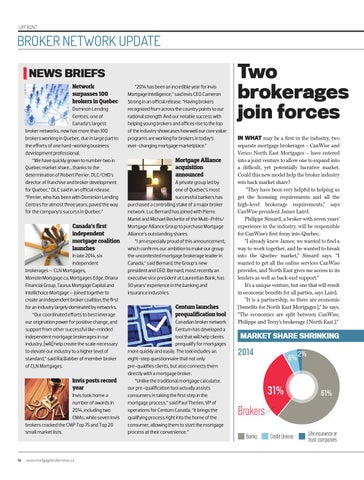 BROKER NETWORK UPDATE NEWS BRIEFS Network surpasses 100 brokers in Quebec Dominon Lending Centres, one of Canada’s largest broker networks, now has more than 100 brokers working in Quebec, due in large part to the efforts of one hard-working business development professional. “We have quickly grown to number two in Quebec market share… thanks to the determination of Robert Perrier, DLC/CHD’s director of franchise and broker development for Quebec,” DLC said in an official release. “Perrier, who has been with Dominion Lending Centres for almost three years, paved the way for the company’s success in Quebec.”

“2014 has been an incredible year for Invis Mortgage Intelligence,” said Invis CEO Cameron Strong in an official release. “Having brokers recognized from across the country points to our national strength. And our notable success with helping young brokers and offices rise to the top of the industry showcases how well our core value programs are working for brokers in today’s ever-changing mortgage marketplace.”

Mortgage Alliance acquisition announced A private group led by one of Quebec’s most successful bankers has purchased a controlling stake of a major broker network. Luc Bernard has joined with Pierre Martel and Michael Beckette of the Multi-Prêts/ Mortgage Alliance Group to purchase Mortgage Alliance’s outstanding shares. “I am especially proud of this announcement, which confirms our ambition to make our group the uncontested mortgage brokerage leader in Canada,” said Bernard, the Group’s new president and CEO. Bernard, most recently an executive vice president at Laurentian Bank, has 30 years’ experience in the banking and insurance industries.

Centum launches prequalification tool Canadian broker network Centum has developed a tool that will help clients prequalify for mortgages more quickly and easily. The tool includes an eight-step questionnaire that not only pre-qualifies clients, but also connects them directly with a mortgage broker. “Unlike the traditional mortgage calculator, our pre-qualification tool actually assists consumers in taking the first step in the mortgage process,” said Paul Therien, VP of operations for Centum Canada. “It brings the qualifying process right into the home of the consumer, allowing them to start the mortgage process at their convenience.”

Two brokerages join forces IN WHAT may be a first in the industry, two separate mortgage brokerages – CanWise and Verico North East Mortgages – have entered into a joint venture to allow one to expand into a difficult, yet potentially lucrative market. Could this new model help the broker industry win back market share? “They have been very helpful in helping us get the licensing requirements and all the high-level brokerage requirements,” says CanWise president James Laird. Philippe Simard, a broker with seven years’ experience in the industry, will be responsible for CanWise’s first foray into Quebec. “I already knew James; we wanted to find a way to work together, and he wanted to break into the Quebec market,” Simard says. “I wanted to get all the online services CanWise provides, and North East gives me access to its lenders as well as back-end support.” It’s a unique venture, but one that will result in economic benefits for all parties, says Laird. “It is a partnership, so there are economic [benefits for North East Mortgages],” he says. “The economics are split between CanWise, Philippe and Terry’s brokerage [North East].”