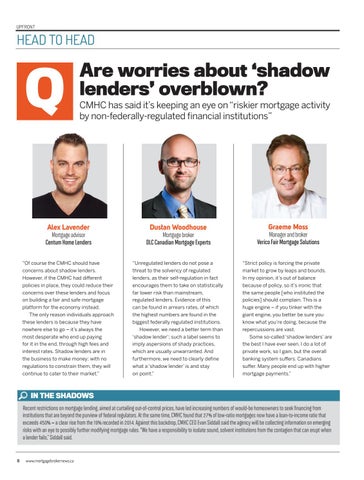 “Of course the CMHC should have concerns about shadow lenders. However, if the CMHC had different policies in place, they could reduce their concerns over these lenders and focus on building a fair and safe mortgage platform for the economy instead. The only reason individuals approach these lenders is because they have nowhere else to go – it’s always the most desperate who end up paying for it in the end, through high fees and interest rates. Shadow lenders are in the business to make money; with no regulations to constrain them, they will continue to cater to their market.”

“Unregulated lenders do not pose a threat to the solvency of regulated lenders, as their self-regulation in fact encourages them to take on statistically far lower risk than mainstream, regulated lenders. Evidence of this can be found in arrears rates, of which the highest numbers are found in the biggest federally regulated institutions. However, we need a better term than ‘shadow lender’; such a label seems to imply aspersions of shady practices, which are usually unwarranted. And furthermore, we need to clearly define what a ‘shadow lender’ is and stay on point.”

“Strict policy is forcing the private market to grow by leaps and bounds. In my opinion, it’s out of balance because of policy, so it’s ironic that the same people [who instituted the policies] should complain. This is a huge engine – if you tinker with the giant engine, you better be sure you know what you’re doing, because the repercussions are vast. Some so-called ‘shadow lenders’ are the best I have ever seen. I do a lot of private work, so I gain, but the overall banking system suffers. Canadians suffer. Many people end up with higher mortgage payments.”

IN THE SHADOWS Recent restrictions on mortgage lending, aimed at curtailing out-of-control prices, have led increasing numbers of would-be homeowners to seek financing from institutions that are beyond the purview of federal regulators. At the same time, CMHC found that 27% of low-ratio mortgages now have a loan-to-income ratio that exceeds 450% – a clear rise from the 19% recorded in 2014. Against this backdrop, CMHC CEO Evan Siddall said the agency will be collecting information on emerging risks with an eye to possibly further modifying mortgage rules. “We have a responsibility to isolate sound, solvent institutions from the contagion that can erupt when a lender fails,” Siddall said.