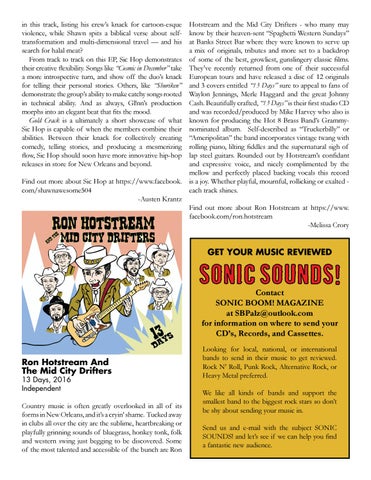 in this track, listing his crew’s knack for cartoon-esque violence, while Shawn spits a biblical verse about selftransformation and multi-dimensional travel — and his search for halal meat? From track to track on this EP, Sic Hop demonstrates their creative flexibility. Songs like “Cosmic in December” take a more introspective turn, and show off the duo’s knack for telling their personal stories. Others, like “Shuriken” demonstrate the group’s ability to make catchy songs rooted in technical ability. And as always, Gl!nn’s production morphs into an elegant beat that fits the mood. Gold Crack is a ultimately a short showcase of what Sic Hop is capable of when the members combine their abilities. Between their knack for collectively creating comedy, telling stories, and producing a mesmerizing flow, Sic Hop should soon have more innovative hip-hop releases in store for New Orleans and beyond. Find out more about Sic Hop at https://www.facebook. com/shawnawesome504 -Austen Krantz

Hotstream and the Mid City Drifters - who many may know by their heaven-sent “Spaghetti Western Sundays” at Banks Street Bar where they were known to serve up a mix of originals, tributes and more set to a backdrop of some of the best, growliest, gunslingery classic films. They’ve recently returned from one of their successful European tours and have released a disc of 12 originals and 3 covers entitled “13 Days” sure to appeal to fans of Waylon Jennings, Merle Haggard and the great Johnny Cash. Beautifully crafted, “13 Days” is their first studio CD and was recorded/produced by Mike Harvey who also is known for producing the Hot 8 Brass Band’s Grammynominated album. Self-described as “Truckerbilly” or “Ameripolitan” the band incorporates vintage twang with rolling piano, lilting fiddles and the supernatural sigh of lap steel guitars. Rounded out by Hotstream’s confidant and expressive voice, and nicely complimented by the mellow and perfectly placed backing vocals this record is a joy. Whether playful, mournful, rollicking or exalted each track shines. Find out more about Ron Hotstream at https://www. facebook.com/ron.hotstream -Melissa Crory

GET YOUR MUSIC REVIEWED

Contact SONIC BOOM! MAGAZINE at SBPalz@outlook.com for information on where to send your CD’s, Records, and Cassettes. Ron Hotstream And The Mid City Drifters 13 Days, 2016 Independent

Country music is often greatly overlooked in all of its forms in New Orleans, and it’s a cryin’ shame. Tucked away in clubs all over the city are the sublime, heartbreaking or playfully grinning sounds of bluegrass, honkey tonk, folk and western swing just begging to be discovered. Some of the most talented and accessible of the bunch are Ron

Looking for local, national, or international bands to send in their music to get reviewed. Rock N’ Roll, Punk Rock, Alternative Rock, or Heavy Metal preferred. We like all kinds of bands and support the smallest band to the biggest rock stars so don’t be shy about sending your music in. Send us and e-mail with the subject SONIC SOUNDS! and let’s see if we can help you find a fantastic new audience.

SONIC BOOM! MAGAZINE is a rock music magazine. The music talked about in Sonic Boom! will focus on the many forms of Rock N’ Roll from Punk Rock to Heavy Metal to Alternative Rock and anything else in between . . . and maybe some things outside of that as well. If we love something or have something good to say about a band we are certainly going to included it here in our pages. SONIC BOOM! MAGAZINE starts it's focus in New Orleans, LA and reaches out to other parts of the world. 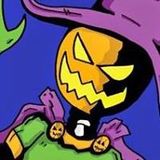