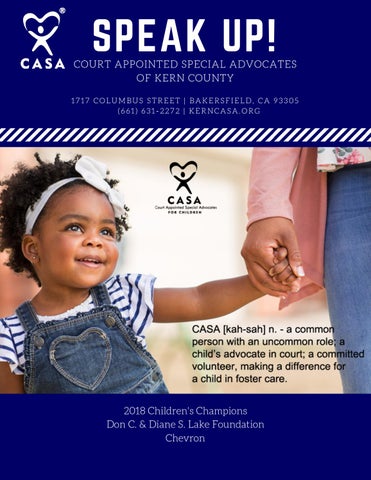 Message from our Executive Director

When I started working for CASA almost seven years ago, I had no idea at the time that I would be joining a force of individuals unwaveringly dedicated to and passionate about serving underprivileged, broken, and hurting foster youth. It is not an understatement to say that my journey with CASA and its superb assembly of board members, staff, volunteers, and supporters has not only helped those we serve, but they have also helped mold and shape me into the person I am today. The mission of advocating for children who need a voice is an unmet and ever-growing need. Meeting an 11-year-old child that has only known drug-addicted parents and insurmountable chaos, who has just experienced losing contact with his siblings and being placed in seven different foster homes, is a tragedy that should never occur. Sadly, this story and so many others like it are the reality for the majority of the 400 children we served last year. The deep need for highly trained, dedicated Advocates has only grown in the 25 years we have been serving this community. That is why we work hard at recruiting more volunteers, supervising and coaching the volunteers we do have, and raising the much needed funds to keep our doors open. None of this happens without you. Without you, our children will fall through the cracks of society. Throughout this newsletter, you will learn about ways you can attend a CASA orientation, volunteer at an event, attend one of our awesome fundraisers, or donate to this cause. It goes without saying that CASA needs you. For those that have supported us in the past, we are deeply grateful. For those that have not, we invite you to join us. Yours in Advocacy,

Thank you to our 2018 Program Partners

Above: Staff members from CASA of Santa Barbara County after completing our Mental Health Advocacy training.

Each of our training classes now receives 4.5 hours of Mental Health Advocacy Training before they take their Oath of Office as Court Appointed Special Advocates.

Help a foster child bloom where they are planted. Become a CASA. Our Spring Training begins on April 24. If you are interested in becoming a CASA, or know someone who might be, call the CASA office at (661) 631-2272 4

Thank you for attending our 2019 Kick-Off event!

Navigating the foster care system can be confusing and downright scary. Studies show foster kids are more likely to wind up in prison, homeless, or parents at a young age. That&#39;s where Court Appointed Special Advocates (CASA) of Kern County comes in. The organization gives foster children Advocates, who sometimes turn into mentors. It&#39;s a program that can be life changing, some might even say life saving. Zachary Sanders has been through a lot in his 19 years. He ended up in the foster system when he was four years old. &quot;My mother was a drug addict. I was adopted for a little bit. I was kicked out, I suppose you would say, of my adopted family.&quot; Sanders was used to not being able to count on anyone, so he pushed away even those who wanted to help. &quot;You constantly meet new people. You get put in a new foster family. They make all sorts of promises, &#39;Oh, we love you, we&#39;re going to be your last family.&#39; Then two months later, &#39;Oh, you gotta leave.&#39;&quot; When he was fifteen-years-old, Sanders was assigned a CASA volunteer. He didn&#39;t expect Rob White to stick around long. &quot;Kids have people come and go and everybody is being paid to be part of the system. That&#39;s where I have an advantage over all of them, because I am a volunteer,&quot; said White. White has been a CASA volunteer for five-and-a-half years. He has had seven cases in that time. A CASA volunteer learns the child&#39;s case and history, then advocates in court for the child&#39;s best interests. Sometimes that means working toward a permanent home for kids Advocate Rob White (left) with Zachary Sanders (right) at Zach&#39;s Marine Boot Camp graduation. who&#39;ve been bounced around all their lives. Sometimes they help implement educational interventions. And sometimes, like in Sanders&#39; case, the CASA can point the child in a new direction. &quot;He helped me start stepping in the right way. He talked me into going into the Grizzly Academy in San Luis Obispo. &quot;The academy is for at-risk students. It was a turning point for Sanders. After graduating, he decided to join the Marines. &quot;The Marines is like a family and I&#39;ve never really had that much of a family before.&quot; Now, at 19, he has graduated from boot camp and is in training in Oklahoma City. But he&#39;ll forever be grateful for the impact CASA had on his life. &quot;I would probably be somewhere in the gutters in Sacramento still, if it wasn&#39;t for you guys.&quot; White and Sanders still keep in touch. Meanwhile, White is working on a new case. &quot;The kids are good kids but they&#39;re not given the tools to make good choices. As a CASA worker, you know their story, and know how to be able to gain their trust so they will listen to good options they would never have considered before.&quot; Zach (far right) and some of his fellow newly graduated Marines.

Â Right now there are 57 foster children on the waiting list for a CASA. If you&#39;re interested in becoming an Advocate, there is a training class beginning in late April. Visit KernCASA.org or call (661) 631-2272 for more information.Â www.kerncasa.org

We at CASA are very excited to be offering the new 2018 National CASA Volunteer Training Curriculum. This evidence-based curriculum was introduced during the Summer 2018 CASA Training. After the first session, explained by we knew there was a lot of merit in the Training Coordinator rationale to offer such a comprehensive Janet Shaw training model. The new training curriculum is designed to give volunteers a solid base of knowledge and skills to begin their volunteer work.

Each Volunteer is provided a Pre-Service Volunteer Manual that serves as their guide during training and will continue to be an important resource to which they refer throughout their service as CASA volunteers. The manual begins with an overview of the CASA volunteer role, our need for volunteer Advocates, and the history of child advocacy in the United States. It then moves into specic skills and knowledge volunteers require in order to work effectively with children and families. As trainees are exposed to best practices, state-of-the-art research and specic steps to advocate on a case, they will be engaged in case-based projects. The training provides experiential opportunities to apply this knowledge in case study scenarios. To maintain the integrity of the curriculum it is important to ensure the content is presented in its entirety. The material in each chapter builds on knowledge gained in previous chapters, and information and tasks progress from simple to complex. That is why in August 2018, we recruited and trained ten Volunteer Training Facilitators. Each of these volunteers picked chapter subjects they are comfortable with, attended instruction on using the curriculum and audited specific chapters during the Fall 2018 Volunteer Training. Beginning January 2019, six of the trained and ready Volunteer Training Facilitators along with CASA Training Facilitator, Janet Shaw, began presenting the Winter 2019 CASA Training. The new CASA Training consists of 52 hours and includes pre-work assignments, eight National Training Curriculum chapters, extensive Mental Health Advocacy training, Family Connections, Mandated Reporting and a Court Day. We are serious when we state in our mission that “through the use of highly trained Volunteers, the CASA program seeks to provide every child who needs an advocate with a voice in the court process.&quot;