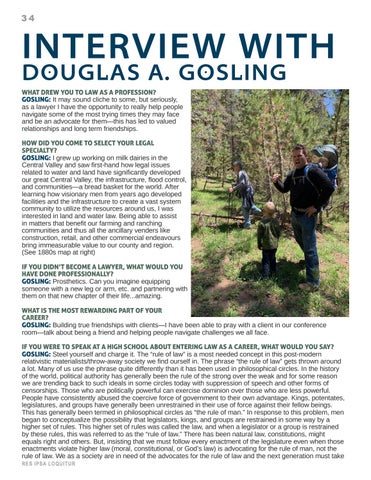 INTERVIEW WITH DOUGLAS A. GOSLING WHAT DREW YOU TO LAW AS A PROFESSION? GOSLING: It may sound cliche to some, but seriously, as a lawyer I have the opportunity to really help people navigate some of the most trying times they may face and be an advocate for them—this has led to valued relationships and long term friendships. HOW DID YOU COME TO SELECT YOUR LEGAL SPECIALTY? GOSLING: I grew up working on milk dairies in the Central Valley and saw first-hand how legal issues related to water and land have significantly developed our great Central Valley, the infrastructure, flood control, and communities—a bread basket for the world. After learning how visionary men from years ago developed facilities and the infrastructure to create a vast system community to utilize the resources around us, I was interested in land and water law. Being able to assist in matters that benefit our farming and ranching communities and thus all the ancillary venders like construction, retail, and other commercial endeavours bring immeasurable value to our county and region. (See 1880s map at right) IF YOU DIDN’T BECOME A LAWYER, WHAT WOULD YOU HAVE DONE PROFESSIONALLY? GOSLING: Prosthetics. Can you imagine equipping someone with a new leg or arm, etc. and partnering with them on that new chapter of their life...amazing. WHAT IS THE MOST REWARDING PART OF YOUR CAREER? GOSLING: Building true friendships with clients—I have been able to pray with a client in our conference room—talk about being a friend and helping people navigate challenges we all face. IF YOU WERE TO SPEAK AT A HIGH SCHOOL ABOUT ENTERING LAW AS A CAREER, WHAT WOULD YOU SAY? GOSLING: Steel yourself and charge it. The “rule of law” is a most needed concept in this post-modern relativistic materialists/throw-away society we find ourself in. The phrase “the rule of law” gets thrown around a lot. Many of us use the phrase quite differently than it has been used in philosophical circles. In the history of the world, political authority has generally been the rule of the strong over the weak and for some reason we are trending back to such ideals in some circles today with suppression of speech and other forms of censorships. Those who are politically powerful can exercise dominion over those who are less powerful. People have consistently abused the coercive force of government to their own advantage. Kings, potentates, legislatures, and groups have generally been unrestrained in their use of force against their fellow beings. This has generally been termed in philosophical circles as “the rule of man.” In response to this problem, men began to conceptualize the possibility that legislators, kings, and groups are restrained in some way by a higher set of rules. This higher set of rules was called the law, and when a legislator or a group is restrained by these rules, this was referred to as the “rule of law.” There has been natural law, constitutions, might equals right and others. But, insisting that we must follow every enactment of the legislature even when those enactments violate higher law (moral, constitutional, or God’s law) is advocating for the rule of man, not the rule of law. We as a society are in need of the advocates for the rule of law and the next generation must take RES IPSA LOQUITUR

The Res Ipsa Loquitur is the bimonthly magazine for the Kern County Bar Association in Bakersfield, California.