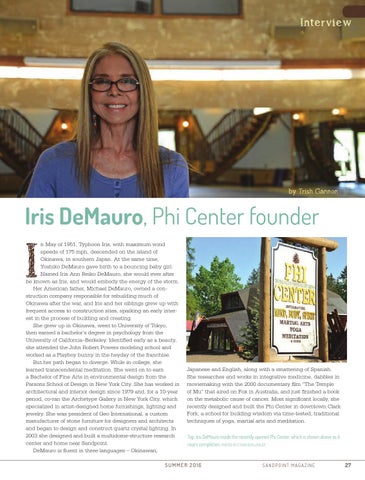 n May of 1951, Typhoon Iris, with maximum wind speeds of 175 mph, descended on the island of Okinawa, in southern Japan. At the same time, Yoshiko DeMauro gave birth to a bouncing baby girl. Named Iris Ann Reiko DeMauro, she would ever after be known as Iris, and would embody the energy of the storm. Her American father, Michael DeMauro, owned a construction company responsible for rebuilding much of Okinawa after the war, and Iris and her siblings grew up with frequent access to construction sites, sparking an early interest in the process of building and creating. She grew up in Okinawa, went to University of Tokyo, then earned a bachelor’s degree in psychology from the University of California–Berkeley. Identified early as a beauty, she attended the John Robert Powers modeling school and worked as a Playboy bunny in the heyday of the franchise. But her path began to diverge. While in college, she learned transcendental meditation. She went on to earn a Bachelor of Fine Arts in environmental design from the Parsons School of Design in New York City. She has worked in architectural and interior design since 1979 and, for a 10-year period, co-ran the Archetype Gallery in New York City, which specialized in artist-designed home furnishings, lighting and jewelry. She was president of Geo International, a custom manufacturer of stone furniture for designers and architects and began to design and construct quartz crystal lighting. In 2003 she designed and built a multidome-structure research center and home near Sandpoint. DeMauro is fluent in three languages – Okinawan,

Japanese and English, along with a smattering of Spanish. She researches and works in integrative medicine, dabbles in moviemaking with the 2000 documentary film “The Temple of Mu” that aired on Fox in Australia, and just finished a book on the metabolic cause of cancer. Most significant locally, she recently designed and built the Phi Center in downtown Clark Fork, a school for building wisdom via time-tested, traditional techniques of yoga, martial arts and meditation. Top: Iris DeMauro inside the recently opened Phi Center, which is shown above as it nears completion. PHOTOS BY ETHAN SCHLUSSLER 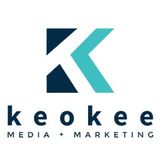