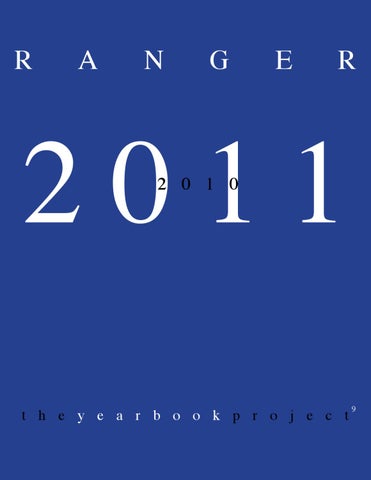 Welcome to the first all-digital Ranger Yea PDF USERS: Navigate pages through Acrobat Reader, or the reader of your choice. (Example: Preview on Macs.) WEB USERS: Navigate by clicking on the magazine image, and use directional arrows (left and right) to navigate pages. Pages can also be navigated by clicking the bars on the far sides of the pages.

This year Dr. Bill Holda, who was named president of the college in 1996, became the the longest-tenured president in the history of Kilgore College.

Welcome Week The Ranger Band plays in the stands at Masters Gym during Kickoff pep rally.

Donald Love throws a KC T-shirt to the crowd.

The KC Rahs make their final pose after their performance.

Rangerette Macy Brocato takes a picture of Maci McClain and Breanne Wilson after the pep rally.

Hollie Haseloff holds a plate of hot food after the pep rally. Food was served by ARAMARK.

Twirler Chelsea Bradley smiles to the audience during the twirlersâ&amp;#x20AC;&amp;#x2122; performance.

lue balloo front step faculty, a the crowd, waiting “The ceremony that classes first m Gorman, 75th Ann The Ranger Ban ceremony. Dr. Mik an invocation, foll Dr. Bill Holda, K how the founding school opened the The first few yea education, though workforce develop and university tran Beginning with now grown to mor administrators. “It is an honor to turn 75 once,” said

A website to help alu memories days at KC be found a kilgore.ed

oons decorate Old Main during the celebration of the 75th he first class day in Kilgore College history.

ons, Rangerettes, twirlers and cheerleaders flanked the ps of Old Main at 3:30 p.m. Sept. 13, 2010. Students, a local TV news crew and community members stood in g for KC’s 75th celebration to begin. was scheduled at 3:30 p.m. because that was the time met in 1935, when KC first opened its doors,” said Leah niversary Committee chairman. nd entertained the crowd as people gathered for the ke Jenkins, vice president of student development, gave lowed by the band playing the KC Alma Mater. KC president, spoke of the college’s rich history and fathers did not have a big celebration in 1935 when the e first day of classes since it was Friday the 13th. ars KC provided the first two years of a four-year college h now it has expanded to offering technical training, pment, adult basic education, developmental education nsfer, along with several other missions. 229 students and 11 teachers in 1935, the college has re than 6,700 students taught by 147 instructors with 14

o work here; it’s an honor to be a part of this. You only d Gorman following the ceremony.

Ranger Band head drum major Randa Gill, Carlisle sophomore, leads the band in playing the school alma mater during the 75th anniversary celebration. Cheerleaders, Rangerettes and twirlers were on hand, and the Ranger Band performed for the ceremony in front of Old Main.

was created umni share from their C. It can at du/75

Trey Hattaway hands his son Thomas, 7, a cookie at the tailgate party before the game.

of the Homecoming Game.

he Ranger Band at halftime.

ans arrived in droves to cheer on the Rangers as they pummeled the Arkansas Baptist College Buffaloes, 51-7. Returning alumni, instructors and students witnessed halftime performances from the Rangerettes, the Ranger Band and the KC Twirlers. Larry Allen, DeSoto sophomore, and Megan Shields, New London freshman, were crowned Homecoming King and Queen. Court photos by Jamie Maldonado

Ashley Austin stands backstage waiting for her cue in the music to enter the stage.

Jacklyn Simone prepares for the next routine in the dressing room.

Jacquelyn Garza strikes a pose in the freshman routine.

Hallie Kutch performs in the number “Climbing,” in Act II.

Football legend Jim Brown chats with Meghan Phillips during a presentation for the AT&amp;T Cotton Bowl Hall of Fame.

The Rangerettes observe the Dallas Cowboys Cheerleaders’ rehearsal. The ’Rettes met the cheerleaders and got the privledge to tour their locker room.

Dallas Cowboys owner Jerry Jones is seen in a giant monitor as the ’Rettes take to the field.

KC president, speaks to graduates during the May 2010 ceremony in Dodson Auditorium, commerating KCâ&amp;#x20AC;&amp;#x2122;s 75th anniversary.

Emily Brooks and Clark Stevens play Esther and Noah, in “Two by Two.”

Aidan Eastwood-Paticchio and Scott Michael Gibbs play the main characters in Alan Broadhurst’s “The Tortoise and the Hare.”

Andi Dëma (Orlando De Boys) admires Meaghan Sullivan (Rosalind) in Shakespeare’s romance “As You Like It.”

From Left: D dean of liber

From Left: F. Dan Beach, liaison to the Board for administrative services; Tony Johnson, director of human resources; J. Karol Pruett, assistant to the president.

he Outstanding Employee Awards are coordinated by the KC Employee Association to recognize employees who have consistently exhibited “Emphasis Excellence” in their work.

At any given moment, dozens or even thousands of students can be found roaming around campus. Itâ&amp;#x20AC;&amp;#x2122;s easy to overlook the walk between classes or the moments spent hanging out in the Lee Mall, but even these seemingly mundane moments are an important part of the KC experience. It is in these moments that the people who comprise KCâ&amp;#x20AC;&amp;#x2122;s rich tapestry of personalities are in action. These are the moments where, if you focus, you can see the faces in the crowd.

Cindy Lavine, who has been a physical therapy assistant instructor for 14 years, is the collegeâ&amp;#x20AC;&amp;#x2122;s nominee for the Minnie Stevens Piper award. She was lso awarded the Hamilton F. and Kathryn G. Beeson Award for excellence in teaching.

Wingyi Tao serves food from her native country, Hong Kong, as part of a presentation in Gwen Wintersâ&amp;#x20AC;&amp;#x2122; English class.

Monica Phillips serves up chips for her demonstration speech explaining how to make cheese dip.

Lori Truman, English instructor, helps a student with an assignment.

David Stroud, history instructor, lectures to one of his classes in Old Main.

A student carefully creates a sculpture.

Victor Garcia plays the lead in the fall production of “Dracula.”

Kaylen Jowell paints the color wheel for a class project.

Kimberli Denton performs in the children’s opera “Pinocchio.” The choir practices Christmas songs for a concert.

Biology instructor Lynn McCutchen holds an amblypygi, just one species in his collection.

Students make use of the Park Fitness Center on a daily basis. Students participate in yoga class and water aerobics while Jeramie Williams lifts weights and Russell Judkins and Ashley LaPrairie practice their steps in ballroom dancing class.

Student firefighters participate in an end-of-the semester controlled burn as part of the requirements for graduation from the KC Fire Academy No. 79.

Oil derricks define the landscape outside the East Texas Oil Museum which celebrated its 30th anniversary on Oct. 3, 2010.

Wide receiver Jacolby Stokes breaks a Trinity Valley tackle as he charges down the field.

Playoff-bound Rangers get ready to play Navarro College at Tiger Stadium in Corsicana.

Tailback Jamall Anderson charges down the field in a game against Cisco. The Rangers defeated the Wranglers, 38-10.

dges an Apache tackle Sept. 4 at Rose Stadium in Tyler. Pratt ran 15 times for 70 yards and a touchdown.

J.J. Eckert addresses Hans Cook on the sidelines during a game. Brandy Eubanks

Eckert voices his disgust with a refereeâ&amp;#x20AC;&amp;#x2122;s call at a game against llege.

Tangekur Payne shoots the ball over a Lady Bearcat defender.

Jah-Leah Ellis goes up for two points in a home game against Angelina College.

Bianca McGee searches for a teammate to pass the ball to.

Jah-Leah Ellis prepares to block a pass of the opposing team.

Alicia Johnson goes for a layup in a game against Lon Morris College Lady Bearcats.

Eric Mayo fights through defensive players for a shot in a home game.

Julian Reese (left) and Trey Potter keep their eyes on the shot as they lunge into the air. The Rangers beat Murray State in the Kilgore Classic in overtime, 64-62.

up in a non-conference game against Arkansas Tech in the Rangers won, 82-41.

Risa Uejo teaches participants how to fold an origami crane during KCâ&amp;#x20AC;&amp;#x2122;s fundraiser for Japan after the country was hit by a tsunami on March 11, 2011.

Japan students serve food at the BSM to help raise money for the Japanese people affected by the tsunami and earthquakes.

The Rahs performed the Rangerette Officer Strut and a kick routine to “Go West” during the “trading places” segment of the Homecoming pep rally.

The Ranger mascot entertains the crowd in the “lasso the buffalo”

The Rahs perform an areobesque stunt during the Homecoming pep rally.

The KC Rahs chant “put your guns up” to get the crowd roaring at the playoff game against Navarro.

” skit. The KC Rahs pump up the crowd in the Masters Gym at a pep rally during KC kickoff week.

The chorale ensemble performs in the Trinity Episcopal Church in Longview, May 4, 2010.

Mat Propes, a member of Diversity Alliance, takes part in making other students aware of the purpose of this program.

Blake Winn portrays alpha male R. P. McMurphy who at first encounter intimidates the other patients of the mental institution during rehearsal of the fall play “One Flew Over the Cuckoo’s Nest.”

Victor Garcia as Dracula and Ayla Cook as Lucy rehearse for “Dracula.”

Joshua Wallace runs through his opening monologue as Dale Shelton and Cody Carson stand poised in the background during rehearsal for the final performance of the semester, “Equus.”

The Early Childhood Professions Club is an organization that was created to allow students who enjoy being around children to receive hands-on training in the fields of early childhood care and education. Members are Seated: Emily Lockridge, Raquel Williams; Standing: Virginia Booker, Laura Pauley, Kacey Templeton, Kayla Borens and Rebecca Wolfe.

Toddlers from the Early Childhood Center (from left) Ava Heimer, Caden Howard, Riley Robinson and Hollie Boone along with lead teacher Dora Owens trick-or-treat through the building on the campus Oct. 30, 2010.

These 15 international students are among 93 from 32 countries.

Kevin Ogilvie directs the band at a football game.

Drum major Chelsea Bradley leads the tuba players as the rest of the band follows.

an enthusiastic routinßºe at halftime.

Left: The Rangerettes show the crowd their famous highkick routine.

Residential Assistants The RAs are students who are chosen for their commitment to helping others living in their residence halls.

Real Talk (The Ministry of Life Challenge) is a Christian group whose goal is to reach, train and send young adults into the vision that God has for their lives. Members are Front Row: Dasha Yusupova and Kevin Lucas; Back Row: Jeremy Johnson, Cara Nyvall, A.D. Crenshaw and Humberto Santillan.

Doctor Charles Jackson is sharing his point of view on Creation and Evolution.

Yuta Suganuma from Japan (left) and Britt Davis, Tri-C director, visit during one of the weekly lunches.

The Tri-C is located on Nolen Street and serves free lunch every Thursday.

Jose Sanchez, Longview attorney, was one of the special speakers for the TRIO lunch-n-learn program. Sanchez graduated from Kilgore College and Texas A&amp;M University and told students never to lose sight of their dreams.

The Taming of the Shrew The Beaux’ Stratagem The Tragedy of Hamlet, Prince of Denmark Ernest in Love For ticket information call: 903-983-8117

KCBookstore For your college needs...

located at both Kilgore and Longview Campuses 163

T-shirts • Caps Printed To Order As you look through these photographs in the years to come, consider that a quality T-shirt

FREE WIFI and a great atmosphere to study! Come join us for a glass of tea!

Thank you for another wonderful year at the

Thank you, Rangerettes, for a wonderful year of fun-filled memories in the Gussie Nell Davis Rangerette Residence. 70th Line we wish you success in your future endeavors and know that you are Forever welcome back here at home! We Love You! 175 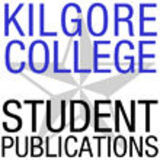