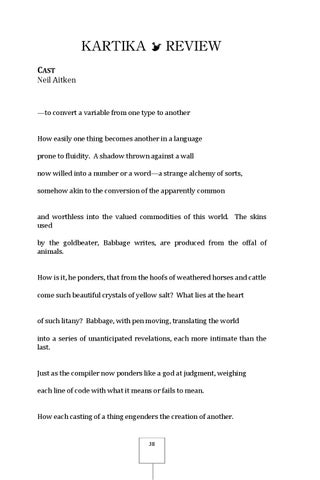 â&amp;#x20AC;&amp;#x201D;to convert a variable from one type to another How easily one thing becomes another in a language prone to fluidity. A shadow thrown against a wall now willed into a number or a wordâ&amp;#x20AC;&amp;#x201D;a strange alchemy of sorts, somehow akin to the conversion of the apparently common and worthless into the valued commodities of this world. The skins used by the goldbeater, Babbage writes, are produced from the offal of animals. How is it, he ponders, that from the hoofs of weathered horses and cattle come such beautiful crystals of yellow salt? What lies at the heart of such litany? Babbage, with pen moving, translating the world into a series of unanticipated revelations, each more intimate than the last. Just as the compiler now ponders like a god at judgment, weighing each line of code with what it means or fails to mean. How each casting of a thing engenders the creation of another.