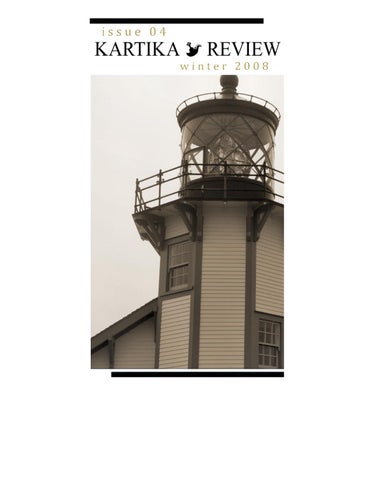 MISSION STATEMENT Kartika Review serves the Asian American community and those involved with Diasporic Asian-inspired literature. We scout for compelling Asian American creative writing and artwork to present to the public at large. Our editors actively solicit contributions from established virtuosos in our community in hopes their works here will inspire the next generation of virtuosos. We also showcase emerging writers and artists we foresee to be the future powerhouses of their craft. Ultimately, Kartika strives to create a literary forum that caters to and celebrates the wordsmiths of the Asian Diaspora.

Where  are  you  hidden  among  towers     and  spires,  labyrinthine  buildings  scraping   the  sky,  obelisks,  citadels,  pyramids  erected     on  the  rough  concrete  ground;  Where  are  you   in  cross  sections  of  shoebox  malls,  gilded  forts,   astrodomes  and  coliseums,  condominiums   with  antennae  zigzagging  through  the  smog;   Where  could  you  be  amidst  a  colossal  tangle   of  palisades  and  pillars,  in  streamlined   geometries  of  transnational  empires?