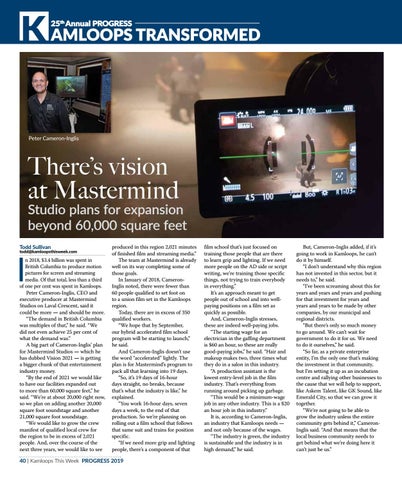 n 2018, $3.4 billion was spent in British Columbia to produce motion pictures for screen and streaming media. Of that total, less than a third of one per cent was spent in Kamloops. Peter Cameron-Inglis, CEO and executive producer at Mastermind Studios on Laval Crescent, said it could be more — and should be more. “The demand in British Columbia was multiples of that,” he said. “We did not even achieve 25 per cent of what the demand was.” A big part of Cameron-Inglis’ plan for Mastermind Studios — which he has dubbed Vision 2021 — is getting a bigger chunk of that entertainment industry money. “By the end of 2021 we would like to have our facilities expanded out to more than 60,000 square feet,” he said. “We’re at about 20,000 right now, so we plan on adding another 20,000 square foot soundstage and another 21,000 square foot soundstage. “We would like to grow the crew manifest of qualified local crew for the region to be in excess of 2,021 people. And, over the course of the next three years, we would like to see

produced in this region 2,021 minutes of finished film and streaming media.” The team at Mastermind is already well on its way completing some of those goals. In January of 2018, CameronInglis noted, there were fewer than 60 people qualified to set foot on to a union film set in the Kamloops region. Today, there are in excess of 350 qualified workers. “We hope that by September, our hybrid accelerated film school program will be starting to launch,” he said. And Cameron-Inglis doesn’t use the word “accelerated” lightly. The plan is for Mastermind’s program to pack all that learning into 19 days. “So, it’s 19 days of 16-hour days straight, no breaks, because that’s what the industry is like,” he explained. “You work 16-hour days, seven days a week, to the end of that production. So we’re planning on rolling out a film school that follows that same suit and trains for position specific. “If we need more grip and lighting people, there’s a component of that

film school that’s just focused on training those people that are there to learn grip and lighting. If we need more people on the AD side or script writing, we’re training those specific things, not trying to train everybody in everything.” It’s an approach meant to get people out of school and into wellpaying positions on a film set as quickly as possible. And, Cameron-Inglis stresses, these are indeed well-paying jobs. “The starting wage for an electrician in the gaffing department is $60 an hour, so these are really good-paying jobs,” he said. “Hair and makeup makes two, three times what they do in a salon in this industry. “A production assistant is the lowest entry-level job in the film industry. That’s everything from running around picking up garbage. “This would be a minimum-wage job in any other industry. This is a $20 an hour job in this industry.” It is, according to Cameron-Inglis, an industry that Kamloops needs — and not only because of the wages. “The industry is green, the industry is sustainable and the industry is in high demand,” he said.

But, Cameron-Inglis added, if it’s going to work in Kamloops, he can’t do it by himself. “I don’t understand why this region has not invested in this sector, but it needs to,” he said. “I’ve been screaming about this for years and years and years and pushing for that investment for years and years and years to be made by other companies, by our municipal and regional districts. “But there’s only so much money to go around. We can’t wait for government to do it for us. We need to do it ourselves,” he said. “So far, as a private enterprise entity, I’m the only one that’s making the investment in that community, but I’m setting it up as an incubation centre and rallying other businesses to the cause that we will help to support, like Askem Talent, like GK Sound, like Emerald City, so that we can grow it together. “We’re not going to be able to grow the industry unless the entire community gets behind it,” CameronInglis said. “And that means that the local business community needs to get behind what we’re doing here it can’t just be us.”