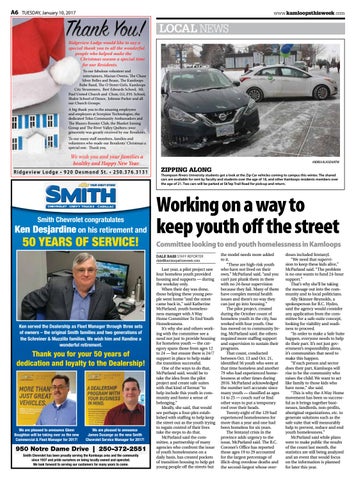 Ridgeview Lodge would like to say a special thank you to all the wonderful people who helped make the Christmas season a special time for our Residents.

To our fabulous volunteer and entertainers, Marian Owens, The Chase Silver Belles and Beaus, The Kamloops Rube Band, The O Street Girls, Kamloops City Strummers, Bert Edwards School, Mt. Paul United Church and Choir, O.L.P.H. School, Shalni School of Dance, Johnnie Parker and all our Church Groups. A big thank you to the amazing employees and employers at Scorpion Technologies, the dedicated Telus Community Ambassadors and The Blazers Booster Club, the Blanket Joining Group and The River Valley Quilters; your generosity was greatly received by our Residents. To our many staff members, families and volunteers who made our Residents’ Christmas a special one. Thank you.

We wish you and your families a healthy and Happy New Year.

Ken Desjardine on his retirement and

Thompson Rivers University students got a look at the Zip Car vehicles coming to campus this winter. The shared cars are available for rent by faculty and students over the age of 18, and other Kamloops residents members over the age of 21. Two cars will be parked at Sk’lep Trail Road for pick-up and return.

Working on a way to keep youth off the street Committee looking to end youth homelessness in Kamloops DALE BASS STAFF REPORTER dale@kamloopsthisweek.com

Ken served the Dealership as Fleet Manager through three sets of owners – the original Smith families and two generations of the Schreiner & Muzzillo families. We wish him and Randine a wonderful retirement.

Thank you for your 50 years of dedication and loyalty to the Dealership!

We are pleased to announce Glenn Boughton will be taking over as the new Commercial & Fleet Manager for 2017!

We are pleased to announce James Dusange as the new Smith Chevrolet Service Manager for 2017!

Smith Chevrolet has been proudly serving the Kamloops area and the community since 1937 and pride ourselves on being locally owned and operated. We look forward to serving our customers for many years to come.

Last year, a pilot project saw four homeless youth provided housing and supports — during the workday only. When their day was done, those helping these young people went home “and the street came back in,” said Katherine McParland, youth homelessness manager with A Way Home Committee To End Youth Homelessness. It’s why she and others working with the committee see a need not just to provide housing for homeless youth — the category spans those from ages 12 to 24 — but ensure there is 24/7 support in place to help make the transition successful. One of the ways to do that, McParland said, would be to take the idea from the pilot project and create safe suites with that kind of format “to help include this youth in community and foster a sense of belonging.” Ideally, she said, that would see perhaps a four-plex established with staffing to help keep the street out as the youth trying to regain control of their lives take the steps to do that. McParland said the committee, a partnership of many agencies who confront the issue of youth homelessness on a daily basis, has created pockets of transition housing to help get young people off the streets but

the model needs more added to it. “These are high-risk youth who have not lived on their own,” McParland said, “and you can’t just plunk them in there with no 24-hour supervision because they fail. Many of them have complex mental health issues and there’s no way they can just go into housing.” The pilot project, created during the October count of homeless youth in the city, has worked with four youth. One has moved on to community living, McParland said; the others required more staffing support and supervision to sustain their programs. That count, conducted between Oct. 13 and Oct. 21, identified 56 youth who were at that time homeless and another 79 who had experienced homelessness at other times during 2016. McParland acknowledged the number isn’t accurate since many youth — classified as ages 14 to 25 — couch surf or find other ways to put a temporary roof over their heads. Twenty-eight of the 129 had experienced homelessness for more than a year and one had been homeless for six years. The fentanyl crisis in the province adds urgency to the issue, McParland said. The B.C. Coroner’s Office has reported those ages 19 to 29 accounted for the largest percentage of illicit-drug overdose deaths and the second-largest whose over-

doses included fentanyl. “We need that supervision to keep these kids alive,” McParland said. “The problem is no one wants to fund 24-hour support.” That’s why she’ll be taking the message out into the community and to local politicians. Ally Skinner-Reynolds, a spokesperson for B.C. Hydro, said the agency would consider any application from the committee for a safe-suite concept, looking for viability and readiness to proceed. “In order to make a Safe Suite happen, everyone needs to help do their part. It’s not just government’s responsibility alone, it’s communities that need to make this happen. “If each person and sector does their part, Kamloops will rise to be the community who raises the child. We want to act like family to those kids who have none,” she said. “This is why the A Way Home movement has been so successful as it brings together businesses, landlords, non-profits, aboriginal organizations, etc. to generate solutions such as the safe suite that will measurably help to prevent, reduce and end youth homelessness.” McParland said while plans were to make public the results of the count last month, the statistics are still being analyzed and an event that would focus on the information is planned for later this year.