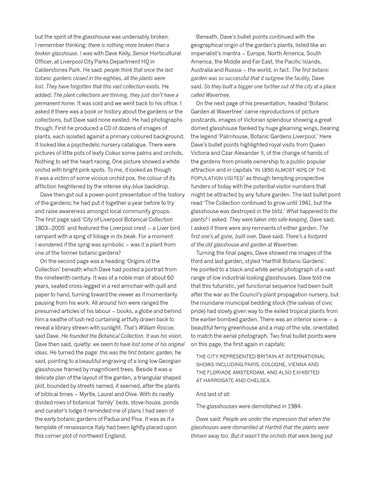 but the spirit of the glasshouse was undeniably broken.

Beneath, Dave’s bullet points continued with the

I remember thinking: there is nothing more broken than a

geographical origin of the garden’s plants, listed like an

broken glasshouse. I was with Dave Kelly, Senior Horticultural

America, the Middle and Far East, the Pacific Islands,

Calderstones Park. He said: people think that once the last

Australia and Russia – the world, in fact. The first botanic

botanic gardens closed in the eighties, all the plants were

garden was so successful that it outgrew the facility, Dave

lost. They have forgotten that this vast collection exists. He

said. So they built a bigger one further out of the city at a place

added: The plant collections are thriving, they just don’t have a

permanent home. It was cold and we went back to his office. I

On the next page of his presentation, headed ‘Botanic

collections, but Dave said none existed. He had photographs

though. First he produced a CD of dozens of images of

plants, each isolated against a primary coloured background.

It looked like a psychedelic nursery catalogue. There were

pictures of little pots of leafy Coleus some palms and orchids.

Victoria and Czar Alexander II, of the change of hands of

Nothing to set the heart racing. One picture showed a white

the gardens from private ownership to a public popular

orchid with bright pink spots. To me, it looked as though

it was a victim of some vicious orchid pox, the colour of its

POPULATION VISITED’ as though tempting prospective

funders of today with the potential visitor numbers that

Dave then got out a power-point presentation of the history

might be attracted by any future garden. The last bullet point

of the gardens; he had put it together a year before to try

read ‘The Collection continued to grow until 1941, but the

glasshouse was destroyed in the blitz.’ What happened to the

plants? I asked. They were taken into safe keeping, Dave said.

I asked if there were any remnants of either garden. The

rampant with a sprig of foliage in its beak. For a moment

of the old glasshouse and garden at Wavertree.

one of the former botanic gardens? On the second page was a heading ‘Origins of the

Collection’ beneath which Dave had posted a portrait from

the nineteenth century. It was of a noble man of about 60

years, seated cross-legged in a red armchair with quill and

that this futuristic, yet functional sequence had been built

paper to hand, turning toward the viewer as if momentarily

after the war as the Council’s plant propagation nursery, but

pausing from his work. All around him were ranged the

the mundane municipal bedding stock (the salvias of civic

presumed articles of his labour – books, a globe and behind

pride) had slowly given way to the exiled tropical plants from

him a swathe of lush red curtaining artfully drawn back to

the earlier bombed garden. There was an interior scene – a

beautiful ferny greenhouse and a map of the site, orientated

said Dave. He founded the Botanical Collection. It was his vision.

to match the aerial photograph. Two final bullet points were

Dave then said, quietly: we seem to have lost some of his original

on this page, the first again in capitals:

ideas. He turned the page: this was the first botanic garden, he said, pointing to a beautiful engraving of a long low Georgian glasshouse framed by magnificent trees. Beside it was a delicate plan of the layout of the garden, a triangular shaped plot, bounded by streets named, it seemed, after the plants of biblical times – Myrtle, Laurel and Olive. With its neatly divided rows of botanical ‘family’ beds, stove-house, ponds and curator’s lodge it reminded me of plans I had seen of the early botanic gardens of Padua and Pisa. It was as if a

THE CITY REPRESENTED BRITAIN AT INTERNATIONAL SHOWS INCLUDING PARIS, COLOGNE, VIENNA AND THE FLORIADE AMSTERDAM, AND ALSO EXHIBITED AT HARROGATE AND CHELSEA.

And last of all: The glasshouses were demolished in 1984. Dave said: People are under the impression that when the

template of renaissance Italy had been lightly placed upon

glasshouses were dismantled at Harthill that the plants were

this corner plot of northwest England.

thrown away too. But it wasn’t the orchids that were being put

'Mr Roscoe's Garden' is a key outcome of The Fragrant Liverpool project. Conceived by Jyll Bradley, this is a unique international art project exploring the stories, rites and exchanges that occur when a flower is cut and placed in the human hand.