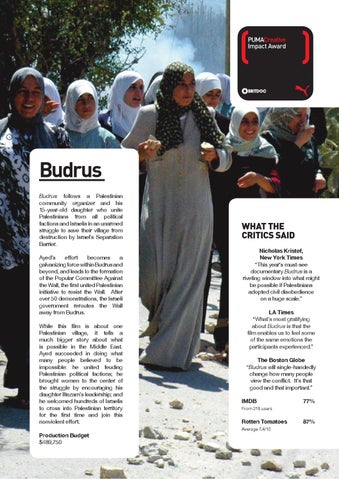 Budrus Budrus follows a Palestinian community organizer and his 15-year-old daughter who unite Palestinians from all political factions and Israelis in an unarmed struggle to save their village from destruction by Israel’s Separation Barrier. Ayed’s effort becomes a galvanizing force within Budrus and beyond, and leads to the formation of the Popular Committee Against the Wall, the first united Palestinian initiative to resist the Wall. After over 50 demonstrations, the Israeli government reroutes the Wall away from Budrus. While this film is about one Palestinian village, it tells a much bigger story about what is possible in the Middle East. Ayed succeeded in doing what many people believed to be impossible: he united feuding Palestinian political factions; he brought women to the center of the struggle by encouraging his daughter Iltezam’s leadership; and he welcomed hundreds of Israelis to cross into Palestinian territory for the first time and join this nonviolent effort. Production Budget $489,750

What the Critics Said Nicholas Kristof, New York Times “This year’s must-see documentary Budrus is a riveting window into what might be possible if Palestinians adopted civil disobedience on a huge scale.” LA Times “What’s most gratifying about Budrus is that the film enables us to feel some of the same emotions the participants experienced.” The Boston Globe “Budrus will single-handedly change how many people view the conflict. It’s that good and that important.” IMDB