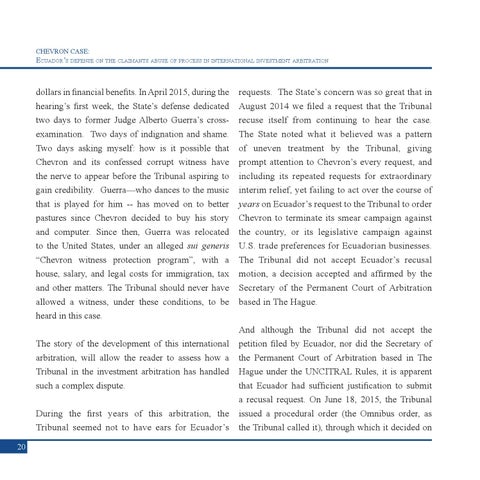 dollars in financial benefits. In April 2015, during the hearing’s first week, the State’s defense dedicated two days to former Judge Alberto Guerra’s crossexamination. Two days of indignation and shame. Two days asking myself: how is it possible that Chevron and its confessed corrupt witness have the nerve to appear before the Tribunal aspiring to gain credibility. Guerra—who dances to the music that is played for him -- has moved on to better pastures since Chevron decided to buy his story and computer. Since then, Guerra was relocated to the United States, under an alleged sui generis “Chevron witness protection program”, with a house, salary, and legal costs for immigration, tax and other matters. The Tribunal should never have allowed a witness, under these conditions, to be heard in this case. The story of the development of this international arbitration, will allow the reader to assess how a Tribunal in the investment arbitration has handled such a complex dispute. During the first years of this arbitration, the Tribunal seemed not to have ears for Ecuador’s 20

This book illustrates the history of Arbitration Investment set by Chevron against the Ecuadorian State, additionally it offers historical and legal aspects of the case. It contains a number of verified data to support the defense of the Ecuadorian State. In the same way it makes reference to the environmental damages and the attacks on Ecuadorian courts by Chevron. 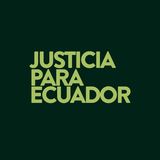