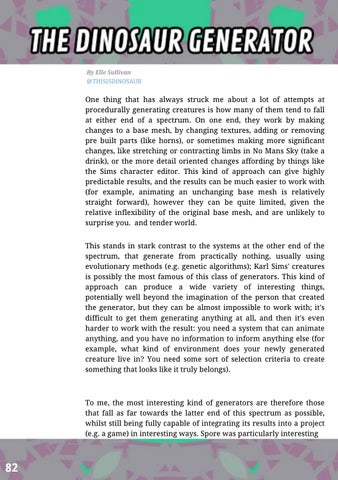 One thing that has always struck me about a lot of attempts at procedurally generating creatures is how many of them tend to fall at either end of a spectrum. On one end, they work by making changes to a base mesh, by changing textures, adding or removing pre built parts (like horns), or sometimes making more significant changes, like stretching or contracting limbs in No Mans Sky (take a drink), or the more detail oriented changes affording by things like the Sims character editor. This kind of approach can give highly predictable results, and the results can be much easier to work with (for example, animating an unchanging base mesh is relatively straight forward), however they can be quite limited, given the relative inflexibility of the original base mesh, and are unlikely to surprise you. and tender world. This stands in stark contrast to the systems at the other end of the spectrum, that generate from practically nothing, usually using evolutionary methods (e.g. genetic algorithms); Karl Sims' creatures is possibly the most famous of this class of generators. This kind of approach can produce a wide variety of interesting things, potentially well beyond the imagination of the person that created the generator, but they can be almost impossible to work with; it's difficult to get them generating anything at all, and then it's even harder to work with the result: you need a system that can animate anything, and you have no information to inform anything else (for example, what kind of environment does your newly generated creature live in? You need some sort of selection criteria to create something that looks like it truly belongs).

To me, the most interesting kind of generators are therefore those that fall as far towards the latter end of this spectrum as possible, whilst still being fully capable of integrating its results into a project (e.g. a game) in interesting ways. Spore was particularly interesting 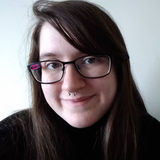