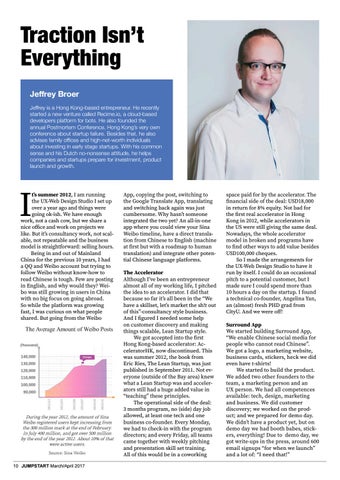 Traction Isn’t Everything Jeffrey Broer Jeffrey is a Hong Kong-based entrepreneur. He recently started a new venture called Recime.io, a cloud-based developers platform for bots. He also founded the annual Postmortem Conference, Hong Kong’s very own conference about startup failure. Besides that, he also advises family offices and high-net-worth individuals about investing in early stage startups. With his common sense and his Dutch no-nonsense attitude, he helps companies and startups prepare for investment, product launch and growth.

t’s summer 2012, I am running the UX-Web Design Studio I set up over a year ago and things were going ok-ish. We have enough work, not a cash cow, but we share a nice office and work on projects we like. But it’s consultancy work, not scalable, not repeatable and the business model is straightforward: selling hours. Being in and out of Mainland China for the previous 10 years, I had a QQ and Weibo account but trying to follow Weibo without know-how to read Chinese is tough. Few are posting in English, and why would they? Weibo was still growing in users in China with no big focus on going abroad. So while the platform was growing fast, I was curious on what people shared. But going from the Weibo

During the year 2012, the amount of Sina Weibo registered users kept increasing from the 300 million mark at the end of February. In July 400 million, and got over 500 million by the end of the year 2012. About 10% of that were active users. Source: Sina Weibo

App, copying the post, switching to the Google Translate App, translating and switching back again was just cumbersome. Why hasn’t someone integrated the two yet? An all-in-one app where you could view your Sina Weibo timeline, have a direct translation from Chinese to English (machine at first but with a roadmap to human translation) and integrate other potential Chinese language platforms. The Accelerator Although I’ve been an entrepreneur almost all of my working life, I pitched the idea to an accelerator. I did that because so far it’s all been in the “We have a skillset, let’s market the sh!t out of this”-consultancy style business. And I figured I needed some help on customer discovery and making things scalable, Lean Startup style. We got accepted into the first Hong Kong-based accelerator: AcceleratorHK, now discontinued. This was summer 2012, the book from Eric Ries, The Lean Startup, was just published in September 2011. Not everyone (outside of the Bay area) knew what a Lean Startup was and accelerators still had a huge added value in “teaching” these principles. The operational side of the deal: 3 months program, no (side) day job allowed, at least one tech and one business co-founder. Every Monday, we had to check-in with the program directors; and every Friday, all teams came together with weekly pitching and presentation skill set training. All of this would be in a coworking

space paid for by the accelerator. The financial side of the deal: USD18,000 in return for 8% equity. Not bad for the first real accelerator in Hong Kong in 2012, while accelerators in the US were still giving the same deal. Nowadays, the whole accelerator model in broken and programs have to find other ways to add value besides USD100,000 cheques. So I made the arrangements for the UX-Web Design Studio to have it run by itself. I could do an occasional pitch to a potential customer, but I made sure I could spend more than 10 hours a day on the startup. I found a technical co-founder, Angelina Yan, an (almost) fresh PHD grad from CityU. And we were off! Surround App We started building Surround App, “We enable Chinese social media for people who cannot read Chinese”. We got a logo, a marketing website, business cards, stickers, heck we did even have t-shirts! We started to build the product. We added two other founders to the team, a marketing person and an UX person. We had all competences available: tech, design, marketing and business. We did customer discovery; we worked on the product; and we prepared for demo day. We didn’t have a product yet, but on demo day we had booth babes, stickers, everything! Due to demo day, we got write-ups in the press, around 600 email signups “for when we launch” and a lot of: “I need that!”

Saying startups are easy couldn’t be further from the truth. The media is always pushing out successful stories, but we rarely hear about how many wrong turns they took before they got there. While there is much to learn from the success stories, there is just as much, if not more, to learn from the stories of how things didn’t go as planned. In this edition of Jumpstart, we share some of these untold stories and what you can learn from them. We hope these insights will help you in entrepreneurship and in life. 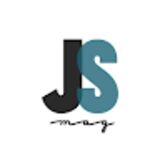