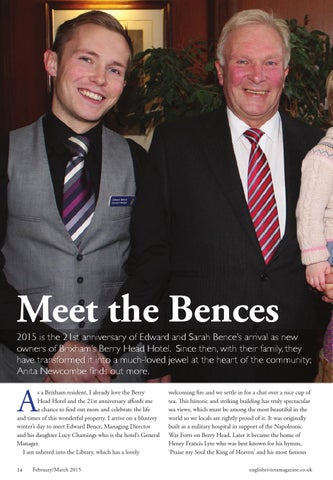 2015 is the 21st anniversary of Edward and Sarah Bence’s arrival as new owners of Brixham’s Berry Head Hotel. Since then, with their family, they have transformed it into a much-loved jewel at the heart of the community; Anita Newcombe ﬁnds out more.

s a Brixham resident, I already love the Berry Head Hotel and the 21st anniversary affords me a chance to find out more and celebrate the life and times of this wonderful property. I arrive on a blustery winter’s day to meet Edward Bence, Managing Director and his daughter Lucy Chamings who is the hotel’s General Manager. I am ushered into the Library, which has a lovely 14

welcoming fire and we settle in for a chat over a nice cup of tea. This historic and striking building has truly spectacular sea views, which must be among the most beautiful in the world so we locals are rightly proud of it. It was originally built as a military hospital in support of the Napoleonic War Forts on Berry Head. Later it became the home of Henry Francis Lyte who was best known for his hymns, ‘Praise my Soul the King of Heaven’ and his most famous englishrivieramagazine.co.uk 9 Pages of springtime events to keep you busy plus a new gardening column and local charities feature. More great riviera people to meet and...

9 Pages of springtime events to keep you busy plus a new gardening column and local charities feature. More great riviera people to meet and...