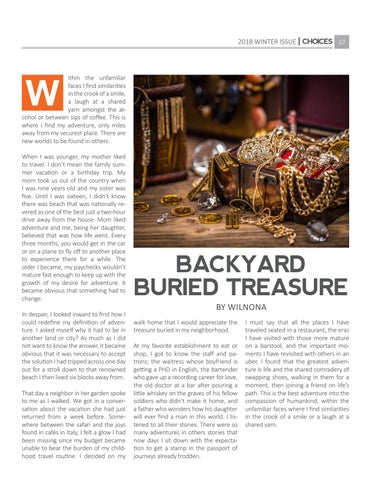 ithin the unfamiliar faces I find similarities in the crook of a smile, a laugh at a shared yarn amongst the alcohol or between sips of coffee. This is where I find my adventure, only miles away from my securest place. There are new worlds to be found in others. When I was younger, my mother liked to travel. I don’t mean the family summer vacation or a birthday trip. My mom took us out of the country when I was nine years old and my sister was five. Until I was sixteen, I didn’t know there was beach that was nationally revered as one of the best just a two-hour drive away from the house. Mom liked adventure and me, being her daughter, believed that was how life went. Every three months, you would get in the car or on a plane to fly off to another place to experience there for a while. The older I became, my paychecks wouldn’t mature fast enough to keep up with the growth of my desire for adventure. It became obvious that something had to change. In despair, I looked inward to find how I could redefine my definition of adventure. I asked myself why it had to be in another land or city? As much as I did not want to know the answer, it became obvious that it was necessary to accept the solution I had tripped across one day out for a stroll down to that renowned beach I then lived six blocks away from. That day a neighbor in her garden spoke to me as I walked. We got in a conversation about the vacation she had just returned from a week before. Somewhere between the safari and the joys found in cafés in Italy, I felt a glow I had been missing since my budget became unable to bear the burden of my childhood travel routine. I decided on my

BACKYARD BURIED TREASURE BY WILNONA walk home that I would appreciate the treasure buried in my neighborhood. At my favorite establishment to eat or shop, I got to know the staff and patrons; the waitress whose boyfriend is getting a PHD in English, the bartender who gave up a recording career for love, the old doctor at a bar after pouring a little whiskey on the graves of his fellow soldiers who didn’t make it home, and a father who wonders how his daughter will ever find a man in this world. I listened to all their stories. There were so many adventures in others stories that now days I sit down with the expectation to get a stamp in the passport of journeys already trodden.

I must say that all the places I have traveled seated in a restaurant, the eras I have visited with those more mature on a barstool, and the important moments I have revisited with others in an uber, I found that the greatest adventure is life and the shared comradery of swapping shoes, walking in them for a moment, then joining a friend on life’s path. This is the best adventure into the compassion of humankind, within the unfamiliar faces where I find similarities in the crook of a smile or a laugh at a shared yarn. 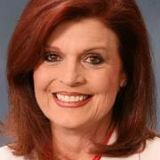