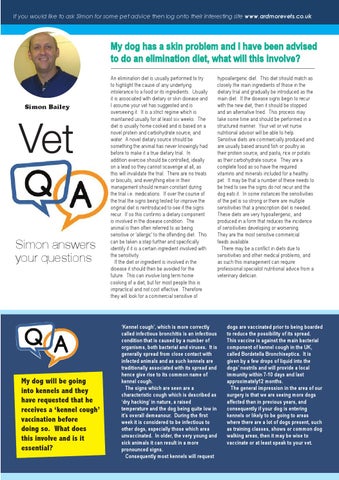 If you would like to ask Simon for some pet advice then log onto their interesting site www.ardmorevets.co.uk

My dog has a skin problem and I have been advised to do an elimination diet, what will this involve?

My dog will be going into kennels and they have requested that he receives a ‘kennel cough’ vaccination before doing so. What does this involve and is it essential?

An elimination diet is usually performed to try to highlight the cause of any underlying intolerance to a food or its ingredients. Usually it is associated with dietary or skin disease and I assume your vet has suggested and is overseeing it. It is a strict regime which is maintained usually for at least six weeks. The diet is usually home cooked and is based on a novel protein and carbohydrate source, and water. A novel dietary source should be something the animal has never knowingly had before to make it a true dietary trial. In addition exercise should be controlled, ideally on a lead so they cannot scavenge at all, as this will invalidate the trial. There are no treats or biscuits, and everything else in their management should remain constant during the trial i.e. medications. If over the course of the trial the signs being tested for improve the original diet is reintroduced to see if the signs recur. If so this confirms a dietary component is involved in the disease condition. The animal is then often referred to as being sensitive or ‘allergic’ to the offending diet. This can be taken a step further and specifically identify if it is a certain ingredient involved with the sensitivity. If the diet or ingredient is involved in the disease it should then be avoided for the future. This can involve long term home cooking of a diet, but for most people this is impractical and not cost effective. Therefore they will look for a commercial sensitive of

‘Kennel cough’, which is more correctly called infectious bronchitis is an infectious condition that is caused by a number of organisms, both bacterial and viruses. It is generally spread from close contact with infected animals and as such kennels are traditionally associated with its spread and hence give rise to its common name of kennel cough. The signs which are seen are a characteristic cough which is described as ‘dry hacking’ in nature, a raised temperature and the dog being quite low in it’s overall demeanour. During the first week it is considered to be infectious to other dogs, especially those which area unvaccinated. In older, the very young and sick animals it can result in a more pronounced signs. Consequently most kennels will request

hypoallergenic diet. This diet should match as closely the main ingredients of those in the dietary trial and gradually be introduced as the main diet. If the disease signs begin to recur with the new diet, then it should be stopped and an alternative tried. This process may take some time and should be performed in a structured manner. Your vet or vet nurse nutritional advisor will be able to help. Sensitive diets are commercially produced and are usually based around fish or poultry as their protein source, and pasta, rice or potato as their carbohydrate source. They are a complete food as so have the required vitamins and minerals included for a healthy pet. It may be that a number of these needs to be tried to see the signs do not recur and the dog eats it. In some instances the sensitivities of the pet is so strong or there are multiple sensitivities that a prescription diet is needed. These diets are very hypoallergenic, and produced in a form that reduces the incidence of sensitivities developing or worsening. They are the most sensitive commercial feeds available. There may be a conflict in diets due to sensitivities and other medical problems, and as such this management can require professional specialist nutritional advice from a veterinary dietician.

dogs are vaccinated prior to being boarded to reduce the possibility of its spread. This vaccine is against the main bacterial component of kennel cough in the UK, called Bordetella Bronchiseptica. It is given by a few drops of liquid into the dogs’ nostrils and will provide a local immunity within 7-10 days and last approximately12 months. The general impression in the area of our surgery is that we are seeing more dogs affected than in previous years, and consequently if your dog is entering kennels or likely to be going to areas where there are a lot of dogs present, such as training classes, shows or common dog walking areas, then it may be wise to vaccinate or at least speak to your vet.

Dear Readers, As I am writing my monthly welcome to you lovely animal lovers, it actually feels like a summer’s day. It’s quite warm and sky is such a beautiful blue. Long may it continue! We have our usual eclectic mix of features in this issue and hope you all enjoy them. 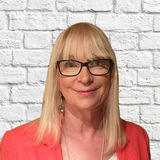 Want to find out more about Simon?

Super Simon has led a sheltered life so far. In just a short time he has built up his confidence by meeting new people on the site and picking up exciting skills with his daily training.\n\nThis lovely lad still has some things to learn so he would love his new owners to help him become the perfect gentleman by carrying on his training.\n