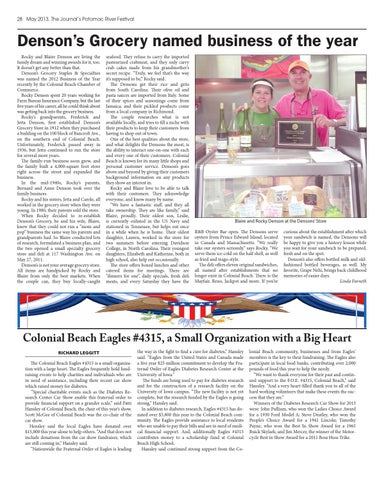 Denson’s Grocery named business of the year Rocky and Blaire Denson are living the family dream and winning awards for it, too. It doesn’t get any better than that. Denson’s Grocery Staples & Specialties was named the 2012 Business of the Year recently by the Colonial Beach Chamber of Commerce. Rocky Denson spent 20 years working for Farm Bureau Insurance Company, but the last five years of his career, all he could think about was getting back into the grocery business. Rocky’s grandparents, Frederick and Jetta Denson, first established Denson’s Grocery Store in 1912 when they purchased a building on the 100 block of Bancroft Ave., on the southern end of Colonial Beach. Unfortunately, Frederick passed away in 1936, but Jetta continued to run the store for several more years. The family-run business soon grew, and the family built a 4,000-square foot store right across the street and expanded the business. In the mid-1940s, Rocky’s parents, Bernard and Anne Denson took over the family business. Rocky and his sisters, Jetta and Carole, all worked in the grocery store when they were young. In 1980, their parents sold the store. When Rocky decided to re-establish Denson’s Grocery, he and his wife, Blaire, knew that they could not run a “mom and pop” business the same way his parents and grandparents had. So Blaire conducted lots of research, formulated a business plan, and the two opened a small specialty grocery store and deli at 117 Washington Ave. on May 27, 2011. Denson’s is not your average grocery store. All items are handpicked by Rocky and Blaire from only the best markets. When the couple can, they buy locally-caught

seafood. They refuse to carry the imported pasteurized crabmeat, and they only carry crab cakes made from his grandmother’s secret recipe. “Truly, we feel that’s the way it’s supposed to be,” Rocky said. The Densons get their rice and grits from South Carolina. Their olive oil and pasta sauces are imported from Italy. Some of their spices and seasonings come from Jamaica, and their pickled products come from a local company in Richmond. The couple researches what is not available locally, and tries to fill a niche with their products to keep their customers from having to shop out of town. One of the best qualities about the store, and what delights the Densons the most, is the ability to interact one-on-one with each and every one of their customers. Colonial Beach is known for its many little shops and personal customer service. Denson’s goes above and beyond by giving their customers background information on any products they show an interest in. Rocky and Blaire love to be able to talk with their customers. They acknowledge everyone, and know many by name. “We have a fantastic staff, and they all take ownership. They are like family,” said Blaire, proudly. Their oldest son, Leslie, is currently enlisted in the US Navy and stationed in Tennessee, but helps out once in a while when he is home. Their oldest daughter, Lauren, worked in the store for two summers before entering Davidson College, in North Carolina. Their youngest daughters, Elizabeth and Katherine, both in high school, also help out occasionally. The store offers boxed lunches and other catered items for meetings. There are “dinners for one”, daily specials, fresh deli meats, and every Saturday they have the

Blaire and Rocky Denson at the Densons’ Store R&B Oyster Bar open. The Densons serve oysters from Prince Edward Island, located in Canada and Massachusetts. “We really take our oysters seriously,” says Rocky, “We serve them ice-cold on the half shell, as well as fried and trago-style. The deli offers eleven original sandwiches, all named after establishments that no longer exist in Colonial Beach. There is the Mayfair, Reno, Jackpot and more. If you’re

curious about the establishment after which your sandwich is named, the Densons will be happy to give you a history lesson while you wait for your sandwich to be prepared, fresh and on the spot. Denson’s also offers bottled milk and oldfashioned bottled beverages, as well. My favorite, Grape Nehi, brings back childhood memories of easier days. Linda Farneth

The Colonial Beach Eagles #4315 is a small organization with a large heart. The Eagles frequently hold fundraising events to help charities and individuals who are in need of assistance, including their recent car show which raised money for diabetes. “Special charitable events such as the Diabetes Research Center Car Show enable this fraternal order to provide financial support on a grander scale,” said Patti Hansley of Colonial Beach, the chair of this year’s show. Scott McGee of Colonial Beach was the co-chair of the car show. Hensley said the local Eagles have donated over $15,000 this year alone to help others. “And that does not include donations from the car show fundraiser, which are still coming in,” Hansley said. “Nationwide the Fraternal Order of Eagles is leading

the way in the fight to find a cure for diabetes,” Hansley said. “Eagles from the United States and Canada made a five year $25 million commitment to develop the Fraternal Order of Eagles Diabetes Research Center at the University of Iowa.” The funds are being used to pay for diabetes research and for the construction of a research facility on the University of Iowa campus. “The new facility is not yet complete, but the research funded by the Eagles is going strong,” Hansley said. In addition to diabetes research, Eagles #4315 has donated over $5,800 this year to the Colonial Beach community. The Eagles provide assistance to local residents who are unable to pay their bills and are in need of medical financial support. And, additionally Eagles #4315 contributes money to a scholarship fund at Colonial Beach High School. Hansley said continued strong support from the Co-

lonial Beach community, businesses and from Eagles’ members is the key to their fundraising. The Eagles also participate in local food banks, contributing over 2,000 pounds of food this year to help the needy. “We want to thank everyone for their past and continued support to the F.O.E. #4315, Colonial Beach,” said Hansley. “And a very heart-filled thank you to all of the hard working volunteers that make these events the success that they are.” Winners of the Diabetes Research Car Show for 2013 were: John Pulliam, who won the Ladies Choice Award for a 1930 Ford Model A; Steve Deatley, who won the People’s Choice Award for a 1941 Lincoln; Timothy Payne, who won the Best In Show Award for a 1965 Buick Skylark; and Jim Mercer, the winner of the Motorcycle Best in Show Award for a 2011 Boss Hoss Trike.