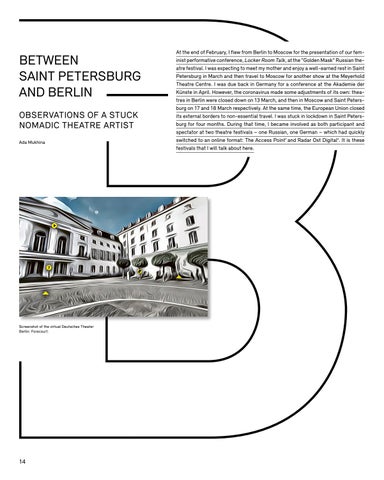 At the end of February, I flew from Berlin to Moscow for the presentation of our feminist performative conference, Locker Room Talk, at the “Golden Mask” Russian theatre festival. I was expecting to meet my mother and enjoy a well-earned rest in Saint Petersburg in March and then travel to Moscow for another show at the Meyerhold Theatre Centre. I was due back in Germany for a conference at the Akademie der Künste in April. However, the coronavirus made some adjustments of its own: theatres in Berlin were closed down on 13 March, and then in Moscow and Saint Petersburg on 17 and 18 March respectively. At the same time, the European Union closed its external borders to non-essential travel. I was stuck in lockdown in Saint Petersburg for four months. During that time, I became involved as both participant and spectator at two theatre festivals – one Russian, one German – which had quickly switched to an online format: The Access Point 1 and Radar Ost Digital 2. It is these festivals that I will talk about here. 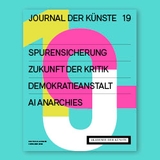