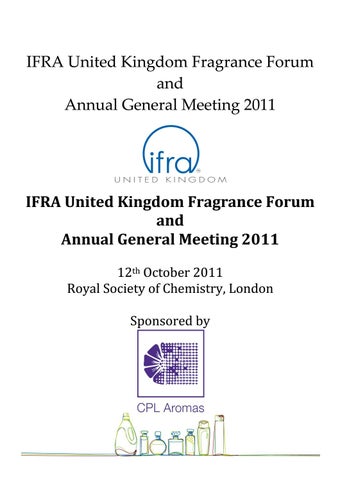 Sound science and IFRA Standards Communicating for the fragrance industry

So you think you smell? The relationship between body odour and fragrance The power of scent in our lives

This article was originally published in SPC and is reproduced here with their kind permission.

SPEAKERS’ BIOGRAPHIES – SESSION ONE HUGO BOVILL Hugo joined Treatt in 1976 and was appointed Managing Director in 1987. Today Treatt is a public company with sales of over US $125 million, exporting to over 90 countries and with manufacturing plants in the UK, Florida USA, and Nairobi, Kenya. Hugo was instrumental in Treatt plc acquiring Earthoil Plantations Limited, which produces organic and Fair Trade essential and vegetable seed oils in various places, but in particular Kenya and India. Hugo was Chairman of the International Federation of Essential Oils and Aroma Trades (IFEAT) from 1998 to 2002 and President from 2005 to 2008. He is on the Executive Committee of the British Essential Oil Association (BEOA) and the UK Flavour Association (formerly the British Essence Manufacturers’ Association). Hugo has visited over 65 countries in his role and delights in seeing essential oils in production. An Africanist, Hugo spent six months in 2010 driving from London to Cape Town before returning to his role as CEO of Treatt plc.

Christophe is a world-famous perfumer who has created fragrances for leading fashion and beauty houses such as Estee Lauder, Thierry Mugler, Michael Kors, Burberry, Tommy Hilfiger, Tom Ford, Clinique, Ralph Lauren, and Abercrombie &amp; Fitch. He is now Master Perfumer and President of DreamAir LLC and promotes the concept of Air Sculpture® design as a result of a close collaboration with Firmenich. He is also the President of the Academy of Perfumery in New York introducing the Osmotheque to America. His creations include: the first scent track for the 2006 film Perfume, including the scent of a virgin and the smell of Paris in 1738, for the Davos World Economic Forum, for the Elton John black candle, for “Orchidelirium” - the first cologne for the Royal Botanical Gardens in London - and for the Hamburg Panoptikum Wax Museum. All of these demonstrate his avant-garde approach to the art of perfumery. His academic work includes the first scents archived at Harvard University and he, along with Christoph Hornetz, are the first perfumers to have scents within the permanent collection of a museum at the International Perfume Museum in Grasse. Christophe has contributed several unique chapters to reference books on perfumery and regularly collaborates with artistes such as Orlan, Heston Blumenthal, photographer Laurent Badessi and New York artist Kiki Smith. He has studied chemistry and is known for his pioneering work, creating a trail of patents, new technologies to display fragrances and for his signature, elaborate and artistic scents and fragrances.

SPEAKERS’ BIOGRAPHIES – SESSION TWO DR. MATTHIAS VEY Matthias is a chemist who was educated at the Technical University of Darmstadt, Germany. After his studies he had a short period of training as a perfumer and then began a career in fragrance research and development for Marbert Cosmetics in Düsseldorf, Germany. He then became global regulatory affairs manager for Coty/Lancaster in Mainz, Germany. Since 2000, as the Scientific Director of IFRA, he has been responsible for the management of the fragrance industry&#39;s worldwide self-regulatory programme, including the IFRA Code of Practice and the IFRA Standards for the safe use of fragrance ingredients, as well as for all internal and external technical communication. He manages all of IFRA’s scientific committees and the Association’s compliance programme and is further actively involved in the regulatory committees and in IFRA&#39;s advocacy activities. Matthias frequently lectures at the ISIPCA Perfumery School in Versailles, France and to students of the Safety Course of the Free University of Brussels.

STEPHEN WELLER An experienced communications professional, Stephen has a degree in Public Relations and has worked for the agriculture sector, the crop protection and biotechnology industries as well as an international policy think tank and the European aluminium industry. Stephen has extensive experience at both EU and global levels in internal and external communications for trade associations. His role at IFRA involves working closely with all the members and their national and regional associations and positioning IFRA with key international institutions and stakeholders. As well as promoting the high safety and quality standards set by IFRA and adhered to by its members, Stephen also promotes the benefits of fragrance to people’s wellbeing and quality of life.

SPEAKERS’ BIOGRAPHIES – SESSION THREE PROFESSOR TIM JACOB PhD BSc Tim is a Professor in the School of Biosciences, Cardiff University He is a leading authority on issues concerning smell and taste, maintaining the top websites (by Google search) on “Smell” and “Taste”, and frequently contributing to radio &amp; TV programmes He has written or contributed to over 75 publications (including seven book chapters) and over 70 conference presentations. His research on monitoring the function of the human olfactory system won the prize for Best International Research Paper at the American Rhinological Society meeting in San Diego, 2002. His work on smell physiology, smell reaction times and smell learning is published in the journals Journal of Physiology, Neuropsychopharmacology, Physiology and Behavior, Clinical Neurophysiology and Chemical Senses. He has worked with many commercial organizations. His basic research has been funded by the Medical Research Council, the Wellcome Trust and the Royal Society. Tim’s research interests include: how we learn to smell and how smell alters our behaviour; how we distinguish to “good” and “bad” smells; brainwave patterns and psychophysiological response to smell; human chemical signalling – human pheromones; measuring olfactory function; and the contribution of smell to flavour

DR. JAN HAVLÍČEK Jan is Associate Professor of Anthropology and Head of Human Ethology Research Group at the Faculty of Humanities, Charles University in Prague, Czech Republic. He has received training in biology (BSc.), biological anthropology (MSc.) and theoretical biology (Ph.D., 2004) at Charles University. His research focuses on human chemical communication, particularly in mate choice context. His work covers changes in female attractiveness across the menstrual cycle, effect of dietary habits on body odour and effect of genetic quality (MHC genes) on bodily attractiveness. Most recently, his focus has been on the interaction between biological quality (body odour) and cultural habits (use of fragrances). During last year, he has spent six months of field work on sexual relationships in southern Namibia. He has published over 40 scientific papers, 10 book chapters and numerous articles for popular media.

LIZZIE OSTROM Lizzie, otherwise known as Odette Toilette, is the founder of Scratch+Sniff events. With a background in communications (though in a very different industry) and a personal obsession with fragrance, she started hosting regular evening events in London about olfaction and perfume in 2010 after wondering why there weren&#39;t any. Dedicated to engaging and delighting audiences in fragrance using all the creative tools she can muster, Lizzie has recently been working with the Wellcome Collection, Coty Ireland, the Future Laboratory and Vintage Seekers, and has just completed a Scent Learning programme with Threeways School in Bath. Recent ventures include contributing to the podcast Life in Scents, available on iTunes, and blogging about perfume for How to Spend It online for the Financial Times. www.scratchandsniffevents.com.

TONY DALLIMORE, IFRA United Kingdom Chairman Tony is Perfumery Director of Phoenix Fragances Ltd, a position he has held for the past 20 years. Previously with FDO, Naarden and PFW he started his perfumery training in the Perfumery Laboratory of Gala Cosmetic Group in 1970 and feels he is still learning. He has worked in all areas of creative Perfumery, specialising in toiletry and homecare fragrancing. His career has taken him to the USA, France, Germany, The Netherlands and the Far East for periods of work in local markets and he enjoys the challenge of adapting his creative skills to regional tastes. He has been a member of the BFA (now IFRA United Kingdom) Executive Committee for the last ten years and says he is honoured to continue in the role of Chairman for the coming year.

LISA HIPGRAVE, IFRA United Kingdom Director Lisa Hipgrave was appointed Director of the British Fragrance Association (now IFRA United Kingdom) in 2006. She first joined the industry in 1984 and, after two years of working within the various laboratories, her dream was realized when she began training as a perfumer.

In 1989 she joined an international fragrance company as a perfumer and remained at that company in various roles until leaving in 2005. Lisa Hipgrave is also a Past President of the British Society of Perfumers.

IFRA UK would like to thank the sponsors of the 2011 In 2008, he was appointed MD of PZ Cussons’ fragrance business, and has CPLoverseen Aromas the is an international fragrance headquartered in company the UK, with Fragrance Forum total transformation of thishouse, traditional compounding into

manufacturing, salesfragrance and creative centres throughout world. in 2010. Neil’s a stand-alone house. Seven Scentthe launched immersion into the seemingly chaotic world of fragrance, has resulted in a CPLbalanced Aromas is home some and of the world’sbusiness leading perfumers and specialists, and blend of to creative modern needs. is a hub of innovation in the industry. Operating from seventeen key locations worldwide CPL delivers excellent customer service throughout the world. These strengths are complemented by a commitment to offer an alternative to the industry establishment, and the company prides itself in having a spirit of independence which respects our customers need for choice. CPL Aromas has a reputation for delivering unique, bespoke perfume compounds on brief and on time. The company operates an innovative development service for fine fragrances, personal care and household/air care applications that is trusted by leading brands throughout the world.

For over 25 years Seven solely worked for the PZ Cussons Group and has successfully supplied perfumes used by the group worldwide. Just 3 years ago the Group invested in a new plant, custom designed not only to make perfume compounding accurate, efficient and flexible, but also to offer a customer focused approach to fragrance creation. This provided the springboard for Seven to launch in May 2010 as a separate business with the ability to offer expertise, creative development and compounding to new customers. Seven works as part of a commercial team focused on adding value to the business and is renowned for a refreshingly different and innovative approach to fragrance creation.