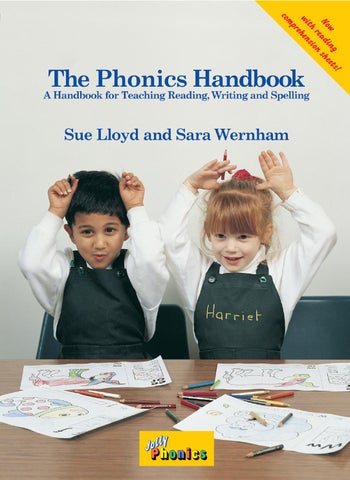 For young children to learn fluent and neat handwriting, they need to be taught how to hold their pencil and how to form their letters correctly. Early mastery is well worth the extra effort involved. Anyone who has tried to correct an older child’s bad pencil hold or incorrect formation knows how difficult, if not impossible, it can be. It is much better to teach it correctly from the start.

The pencil rests between the thumb and the first finger; the next finger prevents the pencil falling down, and the last two fingers are tucked away. This pencil hold applies equally to both left- and right-handed children. The hand rests on the table and the movement of the pencil is through the thumb and first finger. It is important that the knuckles point outwards. Young children are amused if their fingers are likened to ‘froggy legs’, which they must move forwards and backwards. ‘Using Jolly Phonics’ on the Jolly Phonics DVD shows this ‘froggy legs’ movement.

2. The teacher shows the formation in the air, taking care when facing the children to do it in ‘mirror’ writing (so it is the correct way around for the children). The children watch and then form the letter in the air, saying the sound. They do this several times.

3. The children are each given a Sound Sheet, which includes an example of the letter(s) with the formation indicated by arrows and numbers. A line is provided for the children to practise on.

Wiggle your fingers above your elbow, as if ants are crawling on you, and say, a, a, a, a!

Storyline: A boy is going to a party. Everyone will be wearing costumes. The boy wants to dress up as a sailor, like his dad. His dad gives him a sailor’s hat and shows him how to salute. The boy stands to attention and salutes, saying /ie, ie/. Action: The children pretend to be a sailor, saluting and saying, /ie, ie/!

Flash card: Hold up the letters ‹ie›, and say /ie/. Point out that although there are two letters, there is only one sound.

Letter formation: It is easier for the children to remember to write both letters if they learn to join them up. Explain how /ie/ is written. The children form the letters in the air in one continuous movement. Then they trace the dotted letters on the Sound Sheet. Finally, they write the letters on their own. Blending: The children blend the words on the Sound Sheet, pointing to the dot underneath each sound as they say it. Word bank: Pie, lie, die, tried, spied, fried, cried, dried, untie, terrified. Extension activity: Cut out and decorate paper ties.

1. The dog is carrying a

3. The fox is looking at the