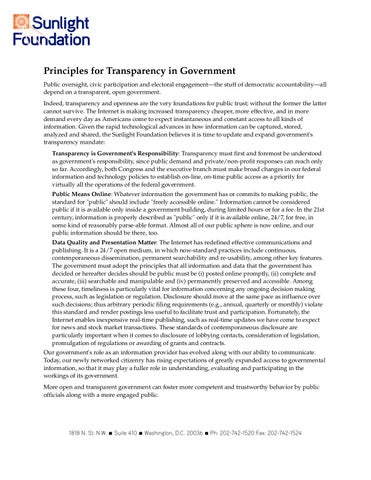 Principles for Transparency in Government Public oversight, civic participation and electoral engagement—the stuff of democratic accountability—all depend on a transparent, open government. Indeed, transparency and openness are the very foundations for public trust; without the former the latter cannot survive. The Internet is making increased transparency cheaper, more effective, and in more demand every day as Americans come to expect instantaneous and constant access to all kinds of information. Given the rapid technological advances in how information can be captured, stored, analyzed and shared, the Sunlight Foundation believes it is time to update and expand government&#39;s transparency mandate: Transparency is Government&#39;s Responsibility: Transparency must first and foremost be understood as government&#39;s responsibility, since public demand and private/non­profit responses can reach only so far. Accordingly, both Congress and the executive branch must make broad changes in our federal information and technology policies to establish on­line, on­time public access as a priority for virtually all the operations of the federal government. Public Means Online: Whatever information the government has or commits to making public, the standard for &quot;public&quot; should include &quot;freely accessible online.&quot; Information cannot be considered public if it is available only inside a government building, during limited hours or for a fee. In the 21st century, information is properly described as &quot;public&quot; only if it is available online, 24/7, for free, in some kind of reasonably parse­able format. Almost all of our public sphere is now online, and our public information should be there, too. Data Quality and Presentation Matter: The Internet has redefined effective communications and publishing. It is a 24/7 open medium, in which now­standard practices include continuous, contemporaneous dissemination, permanent searchability and re­usability, among other key features. The government must adopt the principles that all information and data that the government has decided or hereafter decides should be public must be (i) posted online promptly, (ii) complete and accurate, (iii) searchable and manipulable and (iv) permanently preserved and accessible. Among these four, timeliness is particularly vital for information concerning any ongoing decision making process, such as legislation or regulation. Disclosure should move at the same pace as influence over such decisions; thus arbitrary periodic filing requirements (e.g., annual, quarterly or monthly) violate this standard and render postings less useful to facilitate trust and participation. Fortunately, the Internet enables inexpensive real­time publishing, such as real­time updates we have come to expect for news and stock market transactions. These standards of contemporaneous disclosure are particularly important when it comes to disclosure of lobbying contacts, consideration of legislation, promulgation of regulations or awarding of grants and contracts. Our government&#39;s role as an information provider has evolved along with our ability to communicate. Today, our newly networked citizenry has rising expectations of greatly expanded access to governmental information, so that it may play a fuller role in understanding, evaluating and participating in the workings of its government. More open and transparent government can foster more competent and trustworthy behavior by public officials along with a more engaged public.

Executive Branch Transparency Agenda Public Means Online: The executive branch should offer 21st century publishing practices, where public information is best accessible—online. Government records and data should be affirmatively designated for dissemination and publication online, in the same systematic manner as General Records Schedules or the classification system. Any public record should be posted online within 72 hours of its receipt or creation, made available in a parse­able and downloadable format and permanently preserved, to serve as a resource for citizens and government employees alike. President Obama and his advisors should also consider options for systematic designation of records as public documents in real time, selecting data sources as priorities for open access, and even empowering whistleblowers to summon public oversight when necessary. Online Means Interoperable: Executive branch databases must be designed for interoperability with other similar databases. These databases often describe the same entities, but use different identifiers, rendering deep analysis essentially impossible. Most urgently, the executive branch should create a public database of unique identifiers for ethics information, including both individuals and corporate entities, to allow matching among different datasets across the executive, across the branches, and with databases outside government. Although data may be collected under carefully negotiated jurisdictions, its descriptive impact should not be limited by parochial design elements specific to each agency. The legacy started by the GILS and USA.gov initiatives can be fulfilled by well designed public databases. Influence Data Has Priority: Legitimacy, competence and trust should serve as a foundation for all of government&#39;s activities. Information pertaining to influence, corruption and oversight should take special publication priority over other data sources. Personal financial disclosure forms for all appointees subject to Senate confirmation should be posted online as soon as possible, after a reasonable amount of time for redaction of personally identifiable information. Documents pertaining to government oversight should be similarly centrally available, including reports from Inspectors General, agency planning and strategic vision documents, budgets, performance data and other government sponsored investigations. The executive branch should also publicly and proactively list the oversight reporting required of it by law. Also, the existing reporting mechanisms, including USASpending.gov and personal financial disclosure forms, should be strengthened and made more precise, through legislation if necessary. Information Policy Needs Centralized Authority: Without a strong central authority to control funding and standards, executive branch information policies fail. A top­level office, near the president, should coordinate executive branch policy with national technology policies, and serve as a liaison directly to the president. This office could be a cabinet level office, a White House office, or be housed within OMB—perhaps working under a CTO. The General Services Administration must also play a strong advisory and guidance role, as the de facto champions of Web standards coordination. Without clear guidance from a near­presidential level office, these bodies cannot effectively work with other agencies or outside databases to set the information policies necessary for public, interoperable data. All agencies also face legal uncertainty in dealing with new Web 2.0 tools. To address this, an executive order should designate Web use and social media as a government­wide priority, identifying digital communications technology as a basic method for pursuing core agency goals. The administration should also create a nimble cross­agency coordinative body to address technology issues, combining the existing expertise in the CIO Council, the Federal Web Managers Council, OMB, GSA and the CTO&#39;s office with internal champions from various agencies and NGOs eager to help coordinate government­wide technology initiatives.

Transparency Enables Participation: The CTO faces a host of other urgent public information challenges. The e­rulemaking system is in dire need of standards, funding and authority, despite its well­established participatory role. Proactively designating documents and databases for publication across the various agencies will take a thoughtful and assertive CTO operating in defense of the public&#39;s right to know. Collaborative pilot programs, like the successful Peer to Patent Project, should be encouraged government­wide, and depend for their success on the carefully structured information access that is necessary for citizens to meaningfully participate in governance.

Legislative Priorities for the 111th Congress Enact meaningful lobbyist disclosure. Amend the Lobbying Disclosure Act of 1995 (LDA) to require that all individuals paid to engage in direct issue advocacy with lawmakers, staff and the executive branch, as well as those who bundle campaign contributions to federal candidates above a threshold amount must register and report under the LDA. All registrants should be required to disclose all legislative contacts with a member of Congress, staff or executive branch employee. Disclosure should include all legislation and regulations discussed and all requests for specific services or government funding. Legislative contacts should be reported within 24 hours of any meeting. In addition, the requirement that contributions by registrants be reported semi­annually should be amended to require contributions be reported within 24 hours of being made. All such disclosures should be made electronically, published promptly and maintained online in a downloadable, searchable, sortable format. Require contemporaneous online filing of all public documents and reports. Any public report or document currently required of lawmakers should be filed electronically and shared online in a downloadable, searchable, sortable format within 24 hours of filing. Statements of expenditures, personal financial disclosure reports and campaign finance reports should be filed electronically and publicly available within 24 hours. Personal financial disclosure reports should be amended to require reasonably accurate dollar amounts for the value of assets and liabilities. They should disclose the affiliations of lawmakers, their spouses and adult children with political action committees, &quot;Leadership&quot; PACs, and any 501(c)(3) or 501(c)(4) organizations as well as any immediate family members&#39; employment or other economic relationship with for­profit and not­for­profit entities. Make the fundamental work of Congress more transparent. All non­emergency legislation should be posted online, in its final form, at least 72 hours before consideration. All information relating to earmarks, including the purpose of the earmark and identification of the beneficiaries, should be available online 72 hours before consideration on the legislation containing the earmarks. Communication between a member of Congress, or the lawmaker &#39;s staff and a federal agency in which the lawmaker requests a specific agency action should be made public and posted online within 24 hours of such request unless disclosure would violate national security or law enforcement concerns, or the privacy of an individual constituent of a member of Congress. 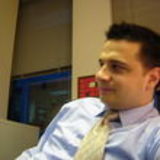