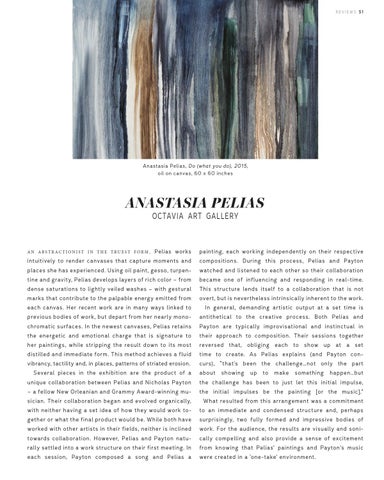 A N A B S T R A C T I O N I S T I N T H E T R U E S T F O R M , Pelias works intuitively to render canvases that capture moments and places she has experienced. Using oil paint, gesso, turpentine and gravity, Pelias develops layers of rich color – from dense saturations to lightly veiled washes – with gestural marks that contribute to the palpable energy emitted from each canvas. Her recent work are in many ways linked to previous bodies of work, but depart from her nearly monochromatic surfaces. In the newest canvases, Pelias retains the energetic and emotional charge that is signature to her paintings, while stripping the result down to its most distilled and immediate form. This method achieves a fluid vibrancy, tactility and, in places, patterns of striated erosion. Several pieces in the exhibition are the product of a unique collaboration between Pelias and Nicholas Payton – a fellow New Orleanian and Grammy Award-winning musician. Their collaboration began and evolved organically, with neither having a set idea of how they would work together or what the final product would be. While both have worked with other artists in their fields, neither is inclined towards collaboration. However, Pelias and Payton naturally settled into a work structure on their first meeting. In each session, Payton composed a song and Pelias a

painting, each working independently on their respective compositions. During this process, Pelias and Payton watched and listened to each other so their collaboration became one of influencing and responding in real-time. This structure lends itself to a collaboration that is not overt, but is nevertheless intrinsically inherent to the work. In general, demanding artistic output at a set time is antithetical to the creative process. Both Pelias and Payton are typically improvisational and instinctual in their approach to composition. Their sessions together reversed that, obliging each to show up at a set time to create. As Pelias explains (and Payton concurs), “that’s been the challenge…not only the part about showing up to make something happen…but the challenge has been to just let this initial impulse, the initial impulses be the painting [or the music].” What resulted from this arrangement was a commitment to an immediate and condensed structure and, perhaps surprisingly, two fully formed and impressive bodies of work. For the audience, the results are visually and sonically compelling and also provide a sense of excitement from knowing that Pelias’ paintings and Payton’s music were created in a ‘one-take’ environment.

ArtHouston is the ultimate resource for connoisseurs, collectors, and art afficionados. In fact, it is the only print magazine devoted to the fine art market in Houston.