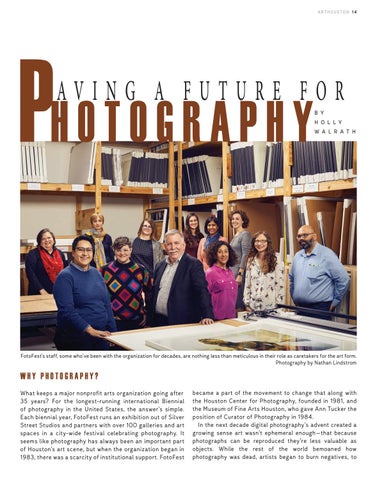 AVING A FUTURE FOR B Y

FotoFest’s staff, some who’ve been with the organization for decades, are nothing less than meticulous in their role as caretakers for the art form. Photography by Nathan Lindstrom

WHY PHOTOGRAPHY? What keeps a major nonprofit arts organization going after 35 years? For the longest-running international Biennial of photography in the United States, the answer’s simple. Each biennial year, FotoFest runs an exhibition out of Silver Street Studios and partners with over 100 galleries and art spaces in a city-wide festival celebrating photography. It seems like photography has always been an important part of Houston’s art scene, but when the organization began in 1983, there was a scarcity of institutional support. FotoFest

became a part of the movement to change that along with the Houston Center for Photography, founded in 1981, and the Museum of Fine Arts Houston, who gave Ann Tucker the position of Curator of Photography in 1984. In the next decade digital photography’s advent created a growing sense art wasn’t ephemeral enough—that because photographs can be reproduced they’re less valuable as objects. While the rest of the world bemoaned how photography was dead, artists began to burn negatives, to 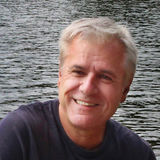