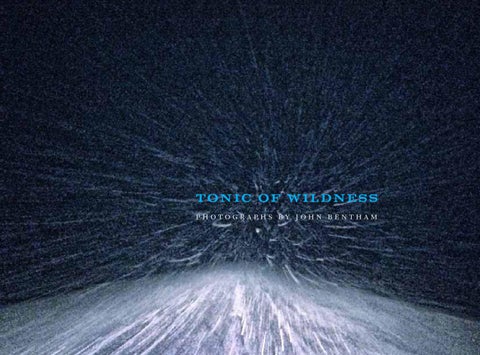 We need the tonic of wildness...At the same time that we are earnest to explore and learn all things, we require that all things be mysterious and unexplorable, that land and sea be infinitely wild, unsurveyed and unfathomed by us because unfathomable. We can never have enough of nature. – Henry David Thoreau, Walden: Or Life in the Woods

depicting individuals from an array of backgrounds in their

In our age of digital manipulation, it is refreshing to see a photograph

environments. His investigation into human behavior has been a

subjects. Bentham also extends his practice to landscapes and details

that complete the photographic stories and provide color and texture to the narratives he portrays. The artist’s humanity toward his subjects is

How can an image be sympathetic, humorous, critical, and poetic at the

evident in his approach: at once insightful, personal, and frank.

same time? That is Bentham’s gift. Somehow he manages to capture all these qualities with an effortlessness that belies the complexity of his

Throughout his career, Bentham has focused on subcultures, including

subjects. His approach to the people and places he photographs does not

endeavor to simplify or qualify their lives. Rather, these images present

these series develop over several years, and the artist fosters close

an often relatable perspective as they document the peculiarities of

relationships with his subjects, allowing for an inside view into their

social behavior. As he has done in his other work, Bentham here uses the

worlds. The series of works featured in this exhibition present a range of

camera to observe and record while he becomes embedded within the

photographs, taken from 2012 through the present, that were inspired

by Bentham’s move from New York City to rural upstate New York in the summer of 2012. After over two decades of living in New York City,

As Thoreau wrote, we need “the tonic of wildness”—moments never

Bentham found the dramatic change from the busyness of urban life

before seen in a particular way, places never before defined with such

to the slower pace of the small town a compelling subject to tackle. The

clarity. Through this new body of work, Bentham delves into the dynamic

resulting images—a group of participants at a local truck pull; a lone rig

and mysterious relationships between people and their environment, a

journey that is endlessly fascinating and unhaltingly original.

the artist operates and lend an experiential, “being there” quality to the moment depicted.

Drawing from a rich tradition of documentary photographers such as

Ruth and Elmer Wellin Museum of Art at Hamilton College

It was the uniqueness of America that came into play, including many cars, many people, terrifying cities, hard-working people and this big country where all speak in one language. It seems to be the uniqueness in the country that I think it’s just the intuition that made me concentrate on that aspect of America. It’s a kind of ordinariness.

— Robert Frank, speaking of The Americans

A kind of ordinariness: An apt description of where I suddenly found

Typically when a photographer travels to a new location, it opens up

myself, and the view from the front porch of my new life. Transplanta-

a new world. Even a locally ubiquitous subject can yield a fresh mine

tion proved to be difficult to master. Historically my documentary

of images, experiences, and photographs. Following my relocation to

projects have focused on subcultures, raucous activities, and colorful

environment required a new vision. I found myself wondering how to

I didn’t fit, an out-of-place city boy, or one the “new” people.

approach it—how could it not be too “ordinary”? My relocation created a dissociation, an alternate reality, a barrier Photographers—true photographers, those who can’t imagine being or

much like Tyvek building wrap—something you commonly see in rural

doing anything else—visualize every unique experience and every scene

throughout their lives as a photograph. We tend to walk down the street

Meant to be a temporary, and ultimately covered layer, at times it

finding photographs. Imagining what this or that would look like with a

becomes semi-permanent, left exposed due to a lack of time or initiative,

frame around it. At times this is invigorating; at times it is exhausting.

or an underestimation of building costs. The wrap remains exposed, a renovation in stasis … until the next spring, a windfall, or employment,

whichever comes first. This whole experience, the “ruralness” and the

than other people. We have to. Life happens quickly and we somehow

banality, felt like a barrier. Not impregnable, not overtly imposing,

see it as our job to interpret and record it. The relative success or failure

though definitely present and tangible.

of any potential photograph is decided in an instant. This approach necessitates intuiting a scene, quickly determining the important

Eventually I began paying closer attention to the everyday, something

elements, eliminating any unnecessary or extraneous elements, and

ultimately capturing the shot in a 1/125 of a second. Obviously the

to remove myself from the toxicity of grime and abrasion. Thus this

technical aspects of photography add yet another level of complexity.

series materialized into a quest to find the uniqueness in everything, an

But first it’s imperative to see the shot, an art difficult to accomplish

exploration into the intrigue of the common. The challenge was how to

Even in a city like New York, a photographer can become tired of seeing the same things. Everywhere gets old after a while. Or perhaps, more accurately, one develops an attitude of self-preservation, dismissing

one’s surroundings or potential photographs. In hindsight, after living in New York City for over 20 years, I realized that much of the city had

become too familiar, having appeared too often in the omnipresent

viewfinder of my eye. Exhibition catalog published by The Foundation Gallery, New Orleans, in conjunction with the exhibition - Tonic of Wildness, Photographs by...

Exhibition catalog published by The Foundation Gallery, New Orleans, in conjunction with the exhibition - Tonic of Wildness, Photographs by...