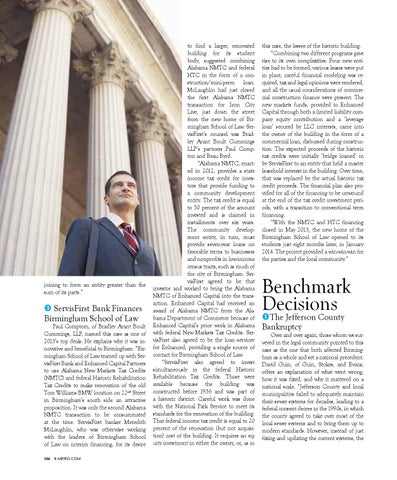 joining to form an entity greater than the sum of its parts.”

Paul Comptom, of Bradley Arant Boult Cummings, LLP, named this case as one of 2013’s top deals. He explains why it was innovative and beneficial to Birmingham: “Birmingham School of Law teamed up with ServisFirst Bank and Enhanced Capital Partners to use Alabama New Markets Tax Credits (NMTC) and federal Historic Rehabilitation Tax Credits to make renovation of the old Tom Williams BMW location on 22nd Street in Birmingham’s south side an attractive proposition. It was only the second Alabama NMTC transaction to be consummated at the time. ServisFirst banker Meredith McLaughlin, who was otherwise working with the leaders of Birmingham School of Law on interim financing, for its desire 126

to find a larger, renovated building for its student body, suggested combining Alabama NMTC and federal HTC in the form of a construction/mini-perm loan. McLaughlin had just closed the first Alabama NMTC transaction for Iron City Live, just down the street from the new home of Birmingham School of Law. ServisFirst’s counsel was Bradley Arant Boult Cummings LLP’s partners Paul Compton and Beau Byrd.  “Alabama NMTC, enacted in 2012, provides a state income tax credit for investors that provide funding to a community development entity. The tax credit is equal to 50 percent of the amount invested and is claimed in installments over six years. The community development entity, in turn, must provide seven-year loans on favorable terms to businesses and nonprofits in low-income census tracts, such as much of the city of Birmingham. ServisFirst agreed to be that investor and worked to bring the Alabama NMTC of Enhanced Capital into the transaction. Enhanced Capital had received an award of Alabama NMTC from the Alabama Department of Commerce because of Enhanced Capital’s prior work in Alabama with federal New Markets Tax Credits. ServisFirst also agreed to be the loan servicer for Enhanced, providing a single source of contact for Birmingham School of Law. “ServisFirst also agreed to invest simultaneously in the federal Historic Rehabilitation Tax Credits. Those were available because the building was constructed before 1936 and was part of a historic district. Careful work was done with the National Park Service to meet its standards for the renovation of the building. That federal income tax credit is equal to 20 percent of the renovation (but not acquisition) cost of the building. It requires an equity investment in either the owner, or, as in

this case, the lessee of the historic building. “Combining two different programs gave rise to its own complexities. Four new entities had to be formed, various leases were put in place, careful financial modeling was required, tax and legal opinions were rendered, and all the usual considerations of commercial construction finance were present. The new markets funds, provided to Enhanced Capital through both a limited liability company equity contribution and a ‘leverage loan’ secured by LLC interests, came into the owner of the building in the form of a commercial loan, disbursed during construction. The expected proceeds of the historic tax credits were initially ‘bridge loaned’ in by ServisFirst to an entity that held a master leasehold interest in the building. Over time, that was replaced by the actual historic tax credit proceeds. The financial plan also provided for all of the financing to be unwound at the end of the tax credit investment periods, with a transition to conventional term financing. “With the NMTC and HTC financing closed in May 2013, the new home of the Birmingham School of Law opened to its students just eight months later, in January 2014. The project provided a win-win-win for the parties and the local community.”

Over and over again, those whom we surveyed in the legal community pointed to this case as the one that both affected Birmingham as a whole and set a national precedent. David Guin, of Guin, Stokes, and Evans, offers an explanation of what went wrong, how it was fixed, and why it mattered on a national scale. “Jefferson County and local municipalities failed to adequately maintain their sewer systems for decades, leading to a federal consent decree in the 1990s, in which the county agreed to take over most of the local sewer systems and to bring them up to modern standards. However, instead of just fixing and updating the current systems, the